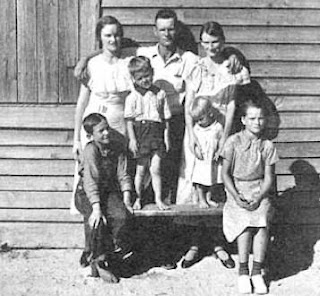 From the time that William Aberhart first began building an interest in the Social Credit movement, he was also raising his profile in the province.

By 1935 there were sixteen hundred Social Credit clubs in Alberta and Aberhart's name had become a household word. And as he and his lieutenant, Ernest Manning, travelled from place to place speaking on the merits of the new system and against the evil banks, they were gathering quite a following.

But not everyone was sold on his theories, and while he was promising a way out of the depression, the media was beginning to ask where exactly the money was coming from.

So to combat the bad press, they just established their own newspaper, the Social Credit Chronicle.

Eva Reid became the circulation manager, as well as one of the reporters. The same Eva Reid who had boarded with the Aberharts for awhile and introduced Ernest Manning's future wife to the evils of dancing.

And if he wasn't able to alleviate the hardships, he could at least offer a break from them. Social Credit picnics, barbecues and rallies, were as frequent as the information sessions, so it would be hard not to get on board with something that at least provided hope. And of course all of these events were covered in the Social Credit Chronicle.

He also created Radio plays, which were little skits that attempted, not necessarily to explain the principles of Social Credit, because I don't think he really understood what they were, but simply to promote them.

A favourite character was the Man From Mars who had come to earth to learn about the system so that he could take it back with him to his planet so that all martians "could live in a happier and more orderly fashion".

In one of these radio plays, the Martian has a conversation with a banker:

I am very anxious to understand. You see, my perplexity is this: I find that you are very rich in goods. In fact you have so much that you wan­t only destroy your abundance. I am told that it is necessary to keep up prices. But at the same time I find that many of your people are suffering from poverty and starvation. Even little children cry for the food and clothing that your governments order destroyed. But their parents cannot buy the goods because they have no money. To get money they must work, but they cannot get work because you have invented wonderful machines to make your goods, so your people must starve in the midst of plenty. You are the manager of a bank – ah, yes! a bank – I understand that a bank is a financial institution empowered by the government to issue and control money. Therefore I ask you, sir, is there no way in which you can supply these people with money even though they cannot get work?

And of course the evil banker responds with things like: "I would like to know how the people would get on without our credit. It is time the public realized that it is dependent wholly upon us for its power to live" and "I am sorry that you have been influenced by the conditions of the idle loafers who are a blight to society. It's time we had another war and got rid of them."

Those bankers were clearly brutes, but they were not the only ones attacked by the radio skits. This would be pattern over the years, even after the Socreds were in power, to launch personal assaults.

Professor Elliot from the University of Alberta, who had spoke at the government's hearing on whether or not to adopt Douglas's theories, became Professor Orthodox Anonymous: "Ah, well, we expect economists are getting used to interviews. The common people seem so dense these days. Always blaming their troubles onto some imaginary defect in our tried and proven economic system. They make me tired. If it wasn't for the politicians distracting their attention by throwing dust in their eyes, they'd drive us crazy".

And to the Liberal leader who was hoping to cash in by also promising to adopt Social Credit, Aberhart called him, Jerry Bluffem, leader of the It's-Our-Turn-Next party. The Martian also paid him a visit: "I am afraid that you are wasting your time worrying about the future. Remember, after we are once in power, we will have the perfect right to cancel our whole program if we so desire. I am afraid that you would never make a good politician. You do not seem to realize that the public will vote for that which they think they want whether the ultimate outcome is going to be to their advantage or not. Our policy therefore is to promise the peo­ple what they think they want, and remember once more, when it comes to an election, every vote counts."

And when the UFA turned down the motion to adopt Social Credit, primarily because it was unconstitutional, Aberhart had a decision to make. He could quit now, knowing that he had fought the good fight, or he could do something about it.

He opted for the latter, and decided then that he would form his own party. He had his platform, his followers, his newspaper and radio, so this would be the next logical step. And that's how the Social Credit Party of Alberta was born.

Chapter Seventeen Continued: Getting in the Race