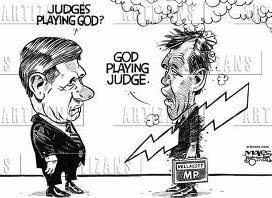 Maurice Vellacott is the Reform-Conservative MP for the riding of Saskatoon—Wanuskewin, and one of the strongest social conservatives in Stephen Harper's caucus.

According to Marci McDonald, author of The Armageddon Factor: The Rise of Christian Nationalism in Canada, Vellacott's office is now the clearing house for Christian Right activity in the capital, thanks to his Reconstructionist legislative assistant; Timothy Bloedow.(1)

He does have a Bachelor's degree from Briercrest College - whose mission statement reads as follows: "Briercrest College and Seminary is a community of rigorous learning that calls students to seek the kingdom of God, to be shaped profoundly by the scriptures, and to be formed spiritually and intellectually for lives of service."

It is an accredited school and I'm sure their standards are exemplary.

However, his 'master's degree' (Master of Divinity from the Canadian Theological Seminary) is not. The CTS is affiliated with the Christian and Missionary Alliance (Harper’s Church), but most of their degrees are obtained, again, through distance education. There is no thesis required, and it is only recognized as a stepping stone toward ministerial pursuits.

And his 'doctorate' degree (Doctor of Ministry from Trinity International University) was obtained from another evangelical Christian university that offers distance education. They are located in Deerfield, Illinois; but if the ‘Trinity’ makes you feel warm and fuzzy, because of the reputation of Trinity University, their website claims that they are NOT affiliated. However, they do list ‘The following online Ph.D. Programs in Religion focus on the nature of religious belief and specific religious and quasi-religious systems.....

This is not the same as the better recognized Doctor of Theology, which is an academic degree, rather than just a ministerial one. In fact, you can obtain a doctorate degree (i.e.: Doctor of Ministry) for your “life experience”; as well as off the Internet.

His education is not really the issue, though he should be more honest in his bio, nor are his religious beliefs. His riding consists of a large Mennonite population, and as Canadians they too deserve a voice. They voted for Vellacott because of his beliefs, not in spite of them.

However, since the majority of Canadians do not share such stringent, and dare I say, hypocritical views, he does not get to force them on the rest of us. I would prefer that Mr. Vellacott be up front and honest, and let us decide on issues that threaten to change the landscape of Canada.

As a Dominionist, he is committed to giving up our reputation for tolerance, without asking us if this is acceptable.

During the leadership campaign of 2002, Maurice Vellacott aligned himself with Stockwell Day, against Stephen Harper and Grant Hill. Harper criticized Vellacott for mailing out endorsements for Day, through his constituency office, at public expense.

However, Harper and Hill both made more serious allegations of exploitation of religion and faith based issues, after a "secret" rally was held at Briercrest, Vellacott's Alma Mata.

Stockwell Day yesterday continued to seek support from evangelical Christians with a barely publicized campaign stop at Canada's largest Bible college, even as one of his opponents warned the Canadian Alliance leadership race risks being "perverted" by a single-interest group. Mr. Day held a campaign rally at Briercrest Bible College in Caronport, Sask., an event that attracted hundreds and was not included in the public itinerary posted on the candidate's Web site. He campaigned earlier in the day at the evangelical Victory Church in Moose Jaw, Sask.

Mr. Day lashed out at rivals Stephen Harper and Grant Hill for accusing him of aiming his campaign primarily at devout Christians and opponents of abortion. the latest chapter in a week-long controversy that began with complaints by Mr. Harper and Dr. Hill over the former party leader's campaign tactics. Last week, organizers for Mr. Harper went public with concerns that Mr. Day is appealing to a narrow base of religious groups -- including orthodox Jews, Pentecostals and anti-abortion Catholics -- in a bid to regain the leadership post he was forced to relinquish late last year.

The Campaign Life Coalition, an anti-abortion lobby group backing Mr. Day, was also censured by party officials for sending out 130,000 letters asking its supporters to donate money so the organization could buy memberships in bulk to help the candidate. Organizers for Dr. Hill and Mr. Harper complained successfully that the actions by Campaign Life violated party rules prohibiting groups from buying memberships.

The National Post has also learned Mr. Day's campaign director in Quebec, Eric Lanthier, recently appealed to evangelical Protestants in Quebec to buy 5,000 memberships. "The objective is 5,000 [membership] cards," Mr. Lanthier wrote in January on the Web site of the Association of Evangelical Protestant Churches, promoting Mr. Day as a candidate who has worked in "defence of Judeo-Christian values."

Vellacott's Attacks on the Judiciary

Maurice Vellacott has always been a vocal critic of Canada's court system. In 2006, he sought out a CBC reporter and accused Chief Justice Beverley McLachlin of claiming "God-like" powers. Citing a speech McLachlin had made to a New Zealand conference, he charged her with comparing the process of applying unwritten constitutional principles to acquiring prophetic gifts. "Suddenly there's some mystical kind of power that comes over them, by which everything that they've ever decreed is not to be questioned." (1)

McLachlin pointed out that she had never said anything like that, and Vellacott was forced to apologize, but it was empty given that he would later suggest that the Supreme Court was assuming the role of a secular priesthood. This made the appointment of Reconstructionist Timothy Bloedow, as his legislative assistant, a perfect match. Bloedow has called for the dismantling of all federal institutions, including the courts, and from his own website: ChristianGovernment.ca

Even most Christians today don’t appreciate these facts and, therefore, they aren’t prepared to support and promote Christian government. Hopefully they will change their position before totalitarian Humanism or Islam take over and it’s too late.

"Even most Christians today don't appreciate these facts"? Bloedow doesn't see a Canada with religious tolerance, not even tolerance for "most Christians".