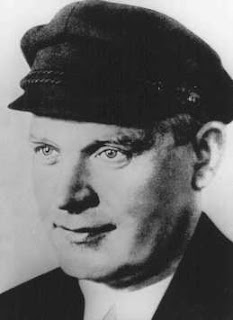 After one of the ugliest campaigns in the history of Germany, the 1930 election would end in two surprise victories. The German Communist Party led by Ernst Thalmann* (shown on the right) took the most seats, and Hitler's fascist party came second.

Red had won spectacularly, but twice as sensational was the win of Brown. In the last Reichstag there was a "joke party" of twelve deputies, headed by Austrian-born Herr Adolf Hitler, crony of General Erich von Ludendorv with whom he spilled Bavarian blood in 1923 trying to stage a putsch (revolution). Scorned
as a "wild man," this Fascist fanatic has been storming up and down depressed Germany, promising Prosperity if given enough votes to do two things: 1) replace Germany's "do nothing" Reichstag and President by a Dictator (presumably the "wild man"); 2) Repudiate Germany's obligations under the Young Plan, thus lifting "from bowed and bloody German backs the galling Reparations yoke!"

And such a gain for Hitler made a lot of people very nervous, and rightfully so. What if he attempted another power grab? Some members of his party were hinting at just such a thing. He had laid down some pretty definitive policies, when it came to the Jewish population:

1) all Jews who have entered Germany since Aug. 2, 1914 would be expelled;
2) the term "Jew" would mean anyone whose ancestors practiced the Mosaic faith after March 11, 1852;
3) Jews would be banned from service in the German army or navy, would pay a special tax by reason of this "exemption";
4) Jews would not be admitted to schools of higher learning, either as teachers or instructors;
5) sales of land to Jews would be void;
6) Jewish-owned newsorgans would be compelled to state that fact in their front-page headline, printing under it the symbolic Mo gen Dovid (Star of David). (2)

With her plump, black-eyed brood, Jewess after rich Jewess scuttled out of Germany last week, filling trains de luxe with wails and confusion. Mother-instinct knew the meaning of Jew-Baiter Adolf Hitler's election victory fortnight ago, when his Fascist "Brown Shirts" leaped fearsomely from ninth to second place among German parties.

To Jew after rich Jew, staying behind to protect their German properties as best they might, occurred a paradoxical but sound idea. Why not contribute to the "Brown Shirt" party fund? Then, in case fiery Herr Hitler should try another coup d'état (like that which he and General von Ludendorü failed to carry through in 1923) surely Jewish contributors would not find Fascist "thunder squads" crashing in their doors. Last week swaggering Hitlerites boasted scornfully of having been offered such "Jew-cash," would not admit to taking it. (2)

But they were not the only ones getting nervous:

Worried Wall Street. Because one of Fascist Hitler's most popular platform points is complete repudiation of all reparations payments, German reparation's bonds sold off last week on all exchanges, declining in London to a figure representing an 11% discount. In Wall Street a recession of some five points in common stocks was charged off by fiscal writers to a whisper among the knowing that "there's revolution in Germany right now, but the censor's sitting on the lid." All the big Berlin banks parried long distance calls from U. S., British and French clients, repeated ad nauseam the belief of their officers that a coalition of Centre" Parties will continue for some time to rule Germany, shutting out the extremists on left and right. (2)

Something big had just taken place. But it was only the beginning.

Chapter Nineteen Continued: A Nation in the Grips of fear

*When Hitler gained power in 1933, he had Thalmann arrested and held in solitary confinement for 11 years, before finally giving the order to have him shot.