Chapter Nineteen: A Nation in the Grips of Fear 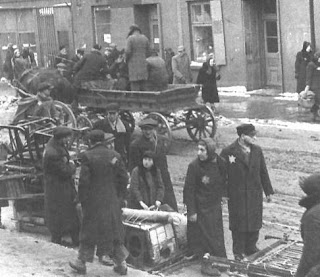 The fear that gripped the Jewish population when Hitler's Brown Shirt Fascists won 107 seats, was not unfounded, and his rowdy gang of thugs and hero worshipping followers set the tone.

The day the Reichstag opened last week there was bedlam within, riot without .. Fascists came early, sat in squads upon all Tiergarten benches near the Reichstag, bawled "Hail Hitler!" and "Wake up Germany!" hour after hour, growing more and more hoarse...

In the unguarded quarter of Berlin's smart shops and great department stores — a vicinity where the streets are so well paved that it is quite impossible to pick up stones — innocent looking citizens suddenly appeared with stones in their pockets. Shrewdly they distributed themselves in front of the plate glass windows of Jewish-owned stores .. Wertheim's, Germans firmly believe, is the "Largest Department Store in the World," sells everything from toothpicks to limousines. Its block-long façade contains 36 large, shimmering plate-glass windows. Abruptly, at a mysterious signal, out from pockets leaped stones, smashed every Wertheim pane and many another.

Windows higher up were shattered by pistol shots. Jewish-owned cafés and banks suffered similar pane-smashes. So adroit was the whole piece of vandalism, so swiftly did the stonethrowers disperse, that when police arrived, frantically summoned by the Jewish store owners, there was nobody to be arrested except very large crowds of curious, innocent by- standers. (1)

And as many of the frightened German citizens began exiting the country, so too did a lot of German wealth.

What did Herr Adolf Hitler's Fascist flash-in-the-pan cost Germany? This question Teuton economists answered last week with a tentative, staggering figure: 1,600,000,000 marks ($380,800,000). They estimated that the "Fascist scare" drove this sum out of Germany, and that it has not returned. Short-term foreign credits have been withdrawn. Germans themselves have sent their capital abroad.

Part of the Hitler fireworks was a gesture of menace at the jews. Instantly this remarkable people took steps. Dine with a leading German-Jewish banker today and you will note that: i) His plate is no longer gold or silver but china; 2) His women are either out of Germany altogether or if present are not wearing their jewels, which are probably in Paris, London or Amsterdam vaults. The banker has been getting his money out too. Silently the Jews have taken their precautions, taken upon Germany a terrible vengeance for the wild words of "Handsome Adolf."

"Germany's credit is damaged if one cables to the world that the so-called Hitler elections threatened Germany with civil war; if representatives of municipalities continue to talk about the prolongation of city loans; if one knows the finances of one's own country so little that even Ministers are forced to change their statements every few weeks; if one does not put an end to the socialistic policy of waste which has been lasting for seven years." (2)

But not everyone saw Hitler's Brown Shirt Fascists as a threat:

Puffing a menthol-cooled cigaret, Prince August Wilhelm von Hohenzollern, fourth son of Wilhelm II, sat in the Visitors' Gallery of the German Reichstag one day last week calmly enjoying a scene of such absolute bedlam, such screeching pandemonium that his smoking passed unchallenged by the ushers.

This prince is the Hohenzollern member of Adolf Hitler's rampant National Socialist, "Nazi" or Fascist Party. Last week the publishers of Berlin's potent Tageblatt charged (in one of their smaller papers, 8-Uhr Abendblatt) that August Wilhelm is the "Paymaster" through whom Wilhelm of Doom has contributed "large sums" to the "Nazi" war-chest. (3)