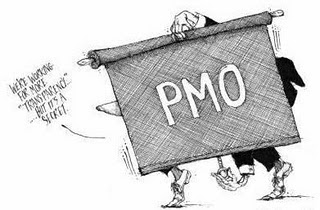 The relationship between the Conservative Party of Canada and the American Republicans dates back to the Reform Party days, and probably even before, but it was strengthened with the Moral Majority/Religious Right.

However, the ties with Jim Sensenbrenner and his son Frank are rather disturbing. Apparently Frank was drawn to the Reformers when he was going to school in Canada and is a close personal friend of Stockwell Day.

However, I'll be getting into that a bit more, but I wanted to go back to Pierre Poilievre's interest in Sensenbrenner.

When he and John Baird were drafting their, what we now know was fraudulent Accountability Act, he went to see the Republican with the possibility of adopting the U.S. False Claims Act.

The Conservatives are considering an American-style law that would pay a bounty to a whistleblower who sues a company that defrauds the federal government or wastes taxpayers' money.

Conservative MP Pierre Poilievre, who is overseeing the Harper government's whistleblower reforms, is meeting with U.S. legislators in Washington over the next several days to see if the U.S. False Claims Act can be adapted to Canada as part of the much-touted Federal Accountability Act. (1)

We have to remember that the "much-touted Accountability Act, was actually a Liberal initiative and those who had worked on the task force had already looked into the U.S. False Claims Act.

Ken Kernaghan, the political scientist at Brock University who headed the task force into whistleblowing, said the members unanimously rejected the idea of paying public servants who expose fraud because it appealed to a "base instinct" that could possibly lead to ill-founded allegations.

Most of the task force's recommendations were ultimately included in the Liberals' whistleblower act, C-11, which passed through the Senate days before the Martin government fell, but wasn't formally proclaimed. (1)

Now Poilievre and Baird never really did anything about an Accountability Act except to make sure that it got a lot of press. They also set up offices with no other function than the ability to be able to say they have those offices in place. But I wanted to take another look at this so-called False Claims Act to see why the Reformers would be interested. And knowing that Jim Sensenbrenner was involved, I knew that somewhere along the line someone would probably be able to profit from it.

And I was right. According to the New York Post the only ones who really benefit are the lawyers and those they use to put forward their claims.

The law allows whistleblowers who report fraud against the government to collect up to 30 percent of any money recovered from information they provide ... Since Congress amended the law in 1986, hiking the potential payout to whistleblowers, suits have grown tenfold, with nearly 70 percent of them involving health-care companies. Since 1986, whistleblowers have collected a staggering $1 billion.

... Then there's the "protection racket" problem. Whistleblowers, plaintiffs' attorneys and even government prosecutors increasingly seem to be targeting legitimate businesses - using the threat of the FCA's steep penalties (which include permanent exclusion from government programs as well as big fines and damages) to coerce companies into settling cases rather than risking a trial verdict that could bankrupt them.

Plaintiffs' attorneys have helped fuel the fervor for FCA lawsuits. Shortly after Congress amended the FCA in 1986, public-interest lawyer John Phillips, who had lobbied heavily for the new legislation, set up a front group, "Taxpayers Against Fraud," to tout the law - and also set up his own private practice to cash in on the act. His firm has won some $100 million in contingency fees pursuing FCA cases, according to Forbes magazine, and its successes have attracted some 200 more contingency lawyers into the field.

Meanwhile, Taxpayers Against Fraud works the media. Cited dozens of times a year in press stories as an advocate for the FCA. (2)

And of course one of the people Phillips lobbied was Jim Sensenbrenner. If you go on their website they sing his praises and Phillips is on record as making contributions to Sensenbrenner's reelection campaigns.

So it would appear that this was not about wanting to clean up government, but wanting their supporters to clean up under the guise of accountability.

I profiled Poilievre first, because apparently the Calgary School are grooming him to eventually lead the movement some day, and since that means that there would be a possibility that he could be prime minister, we can't let him slip under the radar. His girlfriend is a key member of the party hierarchy, so has a lot of clout to make sure his career is nurtured from within.