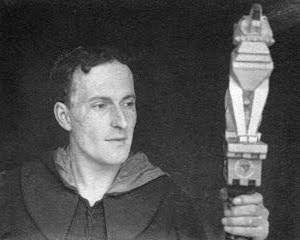 The Green Shirts were created on August 18, 1920, By John Hargrave, as the Kindred of the Kibbo Kift. Hargrave had been with the boy scouts, but was excommunicated, so he started his own group, that included young women and men.

They would later become more political when they adopted the Social Credit elements of Major Douglas. Unlike similar groups at the time, they did not appear to have the fascist elements.

In fact the author George Orwell who had initially supported Social Credit but packed off when he saw the rampant anti-Semitism, linked the Green shirts with other fascist movements, and was eventually forced to apologize to John Hargrave.

When William Aberhart's Social Credit Party won the election in 1935, the Green Shirts marched in London in celebration. Hargrave would also make a trip to Alberta to help him get established.

The purpose of the Kibbo Kift Kindred was to train a body of men and women who, having drawn apart from the mass, would fit themselves to act as a catalyst on a corrupt and directionless society and lead it back to health and wealth. The movement was firmly rooted in English tradition and indeed might rightly be described as the only genuine English national movement of modern times. (1) 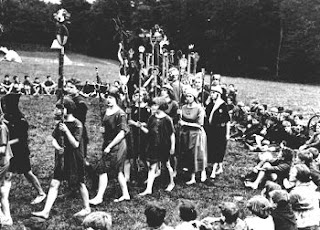 Like Aberhart he was making monetary reform a Christian mission:


On January 3, 1931, Hargrave spoke at the Annual Kinfest, showing how it was the duty of the Kibbo Kift to break the power of the money-mongers. Parliament was useless, and the people themselves lacking hope and courage; but they would follow the Kin if the Kindred could show "that absolute, that religious, that military devotion to duty without which no great cause was ever brought to a successful issue." (1)

They held hunger marches, demonstrations and mass meetings, often inviting violent confrontation. I always thought of them as more of a cult but they are still active today.

1. A History of the Kibbo Kift, by Professor LP Elwell-Sutton, Chief Executive Officer, Kibbo Kift Foundation
Posted by Emily Dee at 6:17 AM