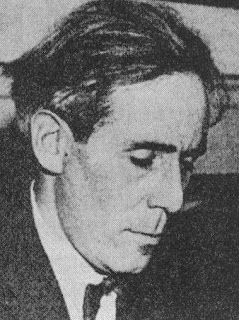 Emil J. Gumbel (1891-1966) was a German intellectual, pacifist, socialist, and scholar who spent most of his adult life fighting to promote democracy in his country.

He had entered the war in 1914, but never saw duty due to ill health. However, he lost a cousin and brother to the cause, so became outspoken against German militarism and the rise of fascism. (1)

The Nazis were able to have him removed from his teaching post at the University of Heidelberg, where he was a Professor of Mathematical Statistics; had him named an enemy of the German people and hounded him into exile, where he continued to sound the alarm.

The Nazis had one victory for the week. After weeks of angry protest, Fascist students at Heidelberg succeeded in having tall, stoop-shouldered Professor Emil J. Gumbel dropped from the faculty. His crime according to the Nazis was that he had announced in a lecture: "A turnip is better than a war memorial, than a statue adorned by scantily clad ladies.'' Professor Gumbel heard the news at Cornell last week where he was attending the International Congress of Genetics. He was not surprised.

"One doesn't become popular," said he. "by saying that a popular policy will lead a country to catastrophe, especially if events have shown it to be true. There is no question that I am a pacifist. The War made me that. And I am an antiFascist. I am in favor of the republic and peace and the welfare of the working class." (2)

However, Gumbel would not be the only university professor attacked during the Nazi purge of intellectuals, who were mostly Jewish, or with a Liberal bent.

Between 1938 and 1945 more than 173 professors and consultants were dismissed from the faculty of medicine at the University of Vienna, alone, as part of a broader effort to place Nazi professors in all areas of higher learning, so that students would be taught the "right things".

"Where one burns books, one will soon burn people." --Heinrich Heine

Gumbel was not only a pacifist and left leaning professor, but he was also the author of several books exposing political assassinations that were classified as "unsolved". And since many of these assassinations had been carried out by the Thule Society, the very society that had created the enigma of Adolf Hitler, he became a dangerous man to the Nazis and his books were among those thrown into the fire under the direction of Joseph Goebbels:

Undampered by a chilly drizzle, some 40,000 Germans jammed the square between Berlin's Friedrich Wilhelm University and the Opera House looking at a black mass of criss-crossed logs, insulated from the pavement by sand. A thumping band blared out old military marches. Toward midnight a procession entered the square, headed by officers of the University's student dueling corps in their dress uniforms: blue tunics, white breeches, plush tam o'shanters and spurred patent leather jack boots.

Behind them came other students and a line of motor trucks piled high with books. More students clung to the trucks, waving flaring torches that they hurled through the air at the log pile. Blue flames of gasoline shot up, the pyre blazed. One squad of students formed a chain from the pyre to the trucks. Then came the books, passed from hand to hand while a leather-lunged student roared out the names of the authors:

"Emil Ludwig—burned for literary rascality and high treason against Germany."

"Sigmund Freud—for falsifying our history and degrading its great figures. . . ."

On he went, calling out the names of practically every modern German author with whom the outside world is familiar: Karl Marx, Jakob Wassermann, Albert Einstein, Thomas and Heinrich Mann, Lion Feuchtwanger. Arnold and Stefan Zweig, Walther Rathenau.

... While the flames flared highest, up to a little flag-draped rostrum stumped clubfooted, wild-eyed little Dr. Paul Joseph Goebbels, Minister of Propaganda and Public Enlightenment in the Nazi Cabinet, organizer of the great midnight bibliocaust. "Jewish intellectualism is dead!" cried he. "National Socialism has hewn the way. The German folk soul can again express itself!

"These flames do not only illuminate the final end of the old etra, they also light up the new. Never before have the young men had so good a right to clean up the debris of the past. . . . The old goes up in flames, the new shall be fashioned from the flame in our hearts. ... As you had the right to destroy the books, you had the
duty to support the government. The fire signals to the entire world that the November revolutionaries have sunk to earth and a new spirit has arisen!" All over Germany similar pyres blazed with similar books. (3)

And just as Gustave Le Bon observed: "In crowds it is stupidity and not mother-wit that is accumulated." Many people in that crowd, if outside the crowd, would know that what was happening was not right. But as part of the mass they had been reduced to the level of the most ignorant among them.

When Goebbels added cinema to his propaganda tools, he told would be filmmakers not to bring him political footage, but entertainment films. Horrendous acts can be made less horrible if accompanied by dancing girls or a "thumping band" blaring out old military marches and student dueling corps in their dress uniforms: blue tunics, white breeches and plush tam o'shanters .. 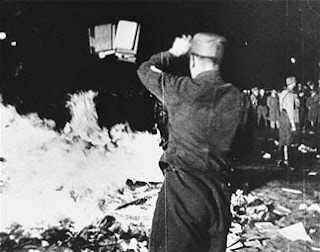 In 2009, a notice began to appear across university campuses advertising training seminars for student activists. Fortunately one of those attending decided to tape the proceedings, prompting the Ryerson Press to cover the story.

Audio recordings, photographs and documents that were leaked from a recent Conservative Party student workshop in Waterloo expose a partisan attempt to take over student unions and undermine Ontario Public Interest Research groups (OPIRGs) on campuses across Ontario.

At a session held in early February by the Ontario Progressive Conservative Campus Association (OPCCA) and the Manning Centre for Building Democracy, campus Conservatives, party campaigners, and a Member of Parliament discussed strategies to gain funding from student unions for the Conservative Party and ways to run for—and win—positions within student unions.

The leaked materials were posted on WikiLeaks.org over the weekend and add to the growing body of evidence that the Conservative Party has a strategy for interfering in campus student unions. In early 2002, the campus press first learned of a secret Millennium Leadership Fund that the party’s campus wing used to fund candidates in student union elections. Now it appears that strategy has evolved into a campaign to falsely obtain student union funding and destabilize student clubs with a social justice mandate.

Among those present at the workshop were Member of Parliament for Kitchener-Waterloo, Peter Braid and his campaign manager, Aaron Lee-Wudrick. Lee-Wudrick is heard on the recordings providing advice on how to siphon money from students’ unions through “front organizations” that would work to further the goals of the Conservative Party. (4) (all emphasis mine)

When this was exposed the Canadian Federation of Students demanded some answers from the government, since this involved both federal and provincial levels.

At the February 7, 2009 Conservative training session for students in Waterloo, a workshop called "Campaign Strategies and Tactics for Keeping the CFS off Campus" was presented by Aaron Lee-Wudrick, Campaign Manager for Member of Parliament Peter Braid, and Ryan O'Connor, Ninth Vice-President of the Progressive Conservative Party of Ontario. Braid and other Conservative politicians participated in training workshops in Waterloo and elsewhere in the country. Other presenters included those from the Conservative Campaign University and the Manning Centre for Building Democracy.

"Students' unions provide an independent democratic voice for students and it is alarming that the Conservative Party of Canada is devoting resources to undermine that voice," said Shelley Melanson, Chairperson of the Canadian Federation of Students-Ontario. "Students have a right to hear directly from Stephen Harper and John Tory about whether it is official party policy to interfere with democratic student unions." (5)

And these incidents were not isolated, but are part of an attempt to discredit not only left thinking students but also professors. In fact Facebook groups were launched in an attempt to petition for the removal of what they called "Liberal Professors".

And federal Conservative MP Steven Fletcher went after students at the University of Manitoba:

Minister Fletcher, on several occasions, went into rants where he referred to UMSU and the Canadian Federation of Students, my representatives, as a bunch of left-wing crazies, the “loony left,” and “loony tunes.” The minister further went into rants about the free press and independent students’ newspapers referring to the Manitoban as a socialist rag. He then began encouraging young Conservative members to take over students’ unions to promote the Conservative ideology.

At several points in his talk, incoming UMSU president-elect Sid Rashid, who was also in the audience, challenged Fletcher on his clearly biased statements regarding current UMSU policies and procedures. What is the government doing meddling in the affairs of independent and democratic student unions? This is not only offensive but completely inappropriate. (6)

Through a Freedom of Information request, the student federation obtained 50 pages of email exchanges in which assistants for the two politicians, who represent student-heavy ridings north of the campus, repeatedly question university executives about the results of a student council vote this spring. (7)

And one of Stephen Harper's senators Mike Duffy verbally attacked the Journalism school at King's College:

Senator Mike Duffy has attacked the University of King’s College and other Canadian journalism schools for exposing students to Noam Chomsky and critical thinking. In a speech Saturday to Conservative party members in Amherst, Duffy reportedly slammed journalism programs for churning out leftist graduates. (8)

There is more than one way to burn books and destroy knowledge.

1. The Emil J. Gumbel Collection, Political Papers of an Anti-Nazi Scholar in Weimar and Exile,
1914-1966, From the Archives of the Leo Baeck Institute, New York University Publications

5. Students call on Harper and Tory to disclose how much party funding was used to undermine students' unions, Canadian Federation of Students, March 18, 2009

6. The True Hidden Agenda, University of Manitoba, The Manitoban, April 5, 2009