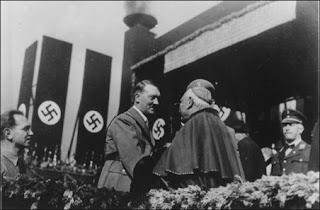 "God says in Jeremiah 16 - 'Behold I will bring them the Jewish people again unto their land that I gave unto their fathers' - that would be Abraham, Isaac and Jacob - 'Behold I will send for many fishers and after will I send for many hunters. And they the hunters shall hunt them' - that will be the Jews - 'from every mountain and from every hill and from out of the holes of the rocks.' If that doesn't describe what Hitler did in the Holocaust... you can't see that? So think about this - I will send fishers and I will send hunters." - Pastor John Hagee in a sermon

"Then God sent a hunter. A hunter is someone with a gun and he forces you. Hitler was a hunter. And the Bible says -- Jeremiah writing -- 'They shall hunt them from every mountain and from every hill and from the holes of the rocks,' meaning there's no place to hide. And that might be offensive to some people but don't let your heart be offended. I didn't write it, Jeremiah wrote it. It was the truth and it is the truth. How did it happen? Because God allowed it to happen. Why did it happen? Because God said my top priority for the Jewish people is to get them to come back to the land of Israel." - Pastor John Hagee in a sermon

Rather astonishing words by John Hagee suggesting that Adolf Hitler was doing God's work. But it speaks to the ideology of Christian Zionists who believe that the end times are near, so they must get all the Jewish people to Israel.

But there is actually more to it than that. 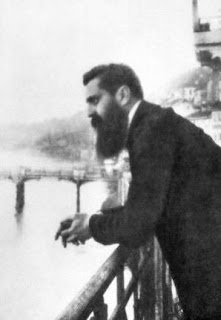 "Theodore Herzl is the father of Zionism. He was a Jew who at the turn of the 19th century said, this land is our land, God wants us to live there. So he went to the Jews of Europe and said 'I want you to come and join me in the land of Israel.' So few went that Herzl went into depression. Those who came founded Israel; those who did not went through the hell of the holocaust." - Pastor John Hagee in a sermon

That is a very simplistic description of who Theodore Herzl was and in fact Herzl would never have cared much for people like John Hagee.

In fact he hated organized religion. When at university he belonged to the Burschenschaften, an association of university students inspired by liberal and nationalistic ideas.

As a Jew he saw the poison of anti-Semitism and really felt that it could not be defeated or cured, and the only solution was the establishment of a Jewish state.

“ The Jewish question persists wherever Jews live in appreciable numbers. Wherever it does not exist, it is brought in together with Jewish immigrants. We are naturally drawn into those places where we are not persecuted, and our appearance there gives rise to persecution. This is the case, and will inevitably be so, everywhere, even in highly civilised countries—see, for instance, France—so long as the Jewish question is not solved on the political level. The unfortunate Jews are now carrying the seeds of anti-Semitism into England; they have already introduced it into America. ”

He met with with Sultan Abdulhamid II to put forward his proposal for a Jewish state in Palestine, but the Sultan was not supportive of the idea. "if one day the Islamic State falls apart then you can have Palestine for free, but as long as I am alive I would rather have my flesh be cut up than cut out Palestine from the Muslim land."

Eventually the Balfour Declaration created the state of Israel, but Herzl had already inspired the Zionist movement. But he did not intend for it to be used in the way that the Christian fundamentalists are using it. They should be ashamed.

When John Hagee suggested that Hitler was doing God's work, he probably meant more than the fact that he forced the Jewish people from their homeland of Germany, which is unforgivable, but he no doubt also appreciated that Hitler went after the Communists.

As many in the Religious Right were calling Obama the Antichrist, Tim Lehaye assured them that Obama was not the Antichrist because they had to get rid of the Communists first.

What happened to the goodness of Christians? This is not spiritually, it's evil. Pure evil.

Fortunately, most Christians do not think like that but what is alarming is how many in the governments of both the Unites States and Canada do. Bruce Wilson did a lot of research into the Hitler/Hagee preaching and has written extensively on the subject. He has videos as well. I find it all very sad.

Hitler and the Nazis were sent by God, to chase Jews back to the land of Israel. Because that's where God intends them to be. So, the Holocaust was a gruesomely inefficient system of divine "persuasion", and Hitler and the Nazis were doing "God's work". But Hagee also depicts this divine ethnic cleansing imperative as a future project: it will happen.

In Hagee's 2006 "Jerusalem Countdown", Hagee says anti-Semitism, and the Holocaust, were and are the fault of Jews - a divine curse for worshiping idols.

What a horrible man. What the Religious Right may not realize is that they have probably created more atheists that communism ever could. I no longer believe in God because of them and it makes me mad as hell.

Hagee is no better than Hitler because that man supports the genocide of the Muslim people. Evil did not die with Adolf Hitler.
Posted by Emily Dee at 9:38 AM