Catechism and the Indoctrination of Children 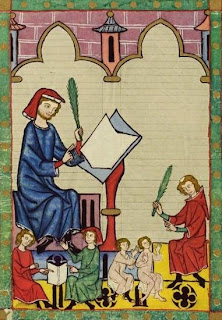 When I was about nine-years-old I met a girl about my age, who had just moved into the neighbourhood. It was at the beginning of summer vacation and for the next two months we were inseparable.

Sleepovers, shared meals and shared lives. We had become like sisters.

Until the day I uncovered a "secret" that changed everything.

One of our favourite places to play had been in a nearby public schoolyard. The paved area was perfect for skipping and they had a swing and a climber. Things not found at my school, which was some distance away.

One day in late august, we ventured a bit closer to the school building and walked around the parameter. My friend would peer into the windows and remark on the things she saw inside.

Finally as she reached the windows to a room without juvenile pictures on the wall, she said "I wonder if that will be my classroom." I was mortified. We had never discussed religion or school all summer, but on that day, I discovered that my new friend was a Protestant.

I was Catholic and we were taught not to trust Protestants, because they were not going to Heaven and may try to lure us to their wicked ways.

Up to that time I had been very careful to choose my associates wisely. However, many of my regular playmates lived closer to the separate school I attended, so we didn't see each other much in the summer. I had let my guard down and was terrified of the consequences.

So when Sunday rolled around, I couldn't wait to get to Church. Throughout the Latin mass, I fidgeted until the time for Confession. I practically fell to my knees before my executioner, hurrying through the "Bless me father for I have sinned ... " I'm sure I included the usual laundry list of a nine-year-old sinner. "I told a lie, I hit my brother, I 'accidentally' dropped my sister's transistor radio into a sink full of suds because she wouldn't let me listen to it."

But then came the whopper. The one I was sure would shake the rafters of the church and cause the statue of the Virgin Mary to weep. "And I played with a Protestant."

I have to admit the reaction from the old priest was not what I had expected. He chuckled. He actually laughed at my demise. And when handing down my sentence of five Hail Marys and as many Our Fathers, he left me with a bit of advice. "Instead of a friend become not an enemy to thy neighbour: for an evil man shall inherit reproach and shame..."

Actually, I don't really remember if that was the quote he used, though it was probably something from Ecclesiasticus, because he often mentioned that in his sermons. The only part of the mass I remembered, because it was the only time he spoke English.

But whatever it was, it translated to "lighten up". However, my Catechism had trained me well, and I never saw that girl again, except in passing. She found other friends from her school, and I got on with my life.

It was only later that I realized that the Catechism that was drilled into my head for the first hour of every school day was an indoctrination, not a teaching. And for that reason I never sent my own children to separate schools, even though I know they don't teach that way now. I did have them all baptized Catholic, however, so I guess a little of the "guilt" stayed with me.

Public Schools Thine are my Enemy

At the 1991 Reform Party Assembly, a guest speaker was William Gairdner, author of the book The Trouble with Canada, which journalist Murray Dobbin stated ".. helped lay the groundwork for Reform Party policy." (1) Reform Party policy which was then being drafted by Stephen Harper.

The Reformers gathered in Saskatoon saved perhaps the loudest cheers, whistles, and applause for Gairdner's last shot: 'And my favourite proposal, by the way, is returning choice to education by privatizing every school in the country'.(1)

Public schooling has long been a target of the Religious Right, both here and in the United States. Part of the reason is their belief in a social Darwinism, with a clear societal structure. Stephen Harper has always been against any social programs that promote universality, forgetting that things like universal health care and public education helped many Canadians to rise to the top.

In a speech to the National Citizens Coalition in 1994, while still MP for Calgary West, he crowed over public policy changes that he attributed to the Reform Party’s influence:

"The Liberal government in Ottawa has announced... no new major social spending programs," he said. "Universality has been severely reduced: It is virtually dead as a concept in most areas of public policy. The family allowance program has been eliminated and unemployment insurance has been seriously cut back." (2)

Later when he was running the NCC, he endorsed a private school tax credit proposed by the Ontario government of Mike Harris, and told the Hill Times that "pulling their children from 'union-run' schools should be a viable option for all parents." (3)

So should it come as any surprise that the Canada Action Plan included 26 million dollars being funnelled to private Bible schools? (4)

Because that is the real reason why movement Conservatives, like Stephen Harper and many members of his caucus and staff, oppose public education. Religion or lack thereof. They are afraid that the concept of secularism is depriving their children of an education drafted within a Biblical framework.

And this is why they prefer home schooling or private faith based schools, which are often an indoctrination, more than an education that will prepare children for the real world. That will allow them to interact with people of all faiths, even if that faith does not include their God or any god at all.

Religious leaders are well aware of the vulnerability of the child brain, and the importance of getting the indoctrination in early. The Jesuit boast, 'Give me the child for his first seven years, and I'll give you the man,' is no less accurate (or sinister) for being hackneyed. In more recent times, James Dobson*, founder of today's infamous 'Focus on the Family' movement," is equally acquainted with the principle: 'Those who control what young people are taught, and what they experience – what they see, hear, think, and believe – will determine the future course for the nation. (5)

And Marcie McDonald also writes of James Dobson and his views on public education:

In the United States, Dobson has urged parents to abandon the public school system, which he sees as a breeding ground for secular humanism, hostile to the Book of Genesis and prayer. “I hope I live to see the day when, as in the early days of our country, we won’t have any public schools,” agreed Jerry Falwell, the founder of the Moral Majority that helped sweep Ronald Reagan into power.

“The churches will have taken them over again, and Christians will be running them.”Those may be long-term aspirations, but the US religious right has learned that patience pays off. (6) 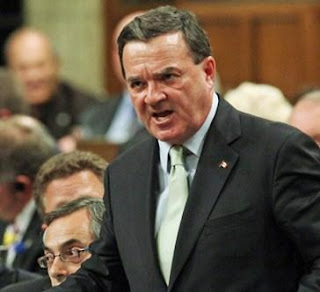 Jim Flaherty: the Man on a Mission

In Flaherty's 2007 budget, he slipped in a little gem, that allowed our tax dollars to fund tuition fees for private religious schools.**

He and Stephen Harper defended the move, by saying that it would also apply to public schools. But public schools don't charge tuition:

The Harper government is giving a tax break to families who send their kids to elite private schools, raising the ire of public education advocates.

Under a little-noticed measure in last month's budget, scholarships and bursaries to attend elementary and secondary school will now be fully tax exempt. Finance officials estimate the new exemption will mean "significant tax savings" for about 1,000 students – or, by extension, their parents.

Officials insisted that the exemption applies to scholarships for either public or private schools. But they couldn't supply any examples of public schools – which are funded from the public purse and don't charge tuition fees – awarding scholarships or bursaries. (7)

This despite the fact that Canadians have consistently stated that they do not want their tax dollars funding these "elite" schools. In fact it cost John Tory the election in Ontario, because he proposed funding religious schools. And I actually liked John Tory, though I still bear the scars of the Mike Harris regime, so won't be voting conservative again anytime soon.

But anyone who has followed Jim Flaherty's career knows that this has long been a goal of his.

I already mentioned the fact that Stephen Harper's National Citizens Coalition threw their support behind his move to grant huge tax credits to this country's religious elite, who could afford to send their children to private Bible schools.

When he was running against Ernie Eves for the provincial leadership in 2002, an American freelance journalist wrote of Flaherty:

His full-bodied, conservative platform of tax cuts, privatization, and school choice, first caught the attention of grassroots conservatives with his unexpected announcement in last year's budget of a $3,500 ($2,300 USD) per-child tax credit for parents who send their children to independent schools. The measure, according to Laura Swartley of the Milton*** and Rose D. Friedman Foundation for School Choice, is the most generous education tax credit in North America. It alone has won Flaherty the support of social conservatives and minority religious groups. (8)

*James Dobson is the founder of Focus on the Family and one of the most prominent members of the U.S. Religious Right. His group is mostly anti-gay, anti-abortion , anti-Muslim and anti-women's rights. He provided 1.6 million dollars to establish a Focus on the Family in Canada, which was started up by Stephen Harper's current deputy chief of staff, Darrel Reid, and many members of Harper's caucus belong to it.

**If you think that Flaherty is somehow a "Godly" man, check out this story by BCer in Toronto. It would appear that Flaherty and his wife cashed in on the budget, by allegedly cheating taxpayers out of almost a million dollars. He has a lot of documentation.

*** Milton Friedman was Ronald Reagan's financial guru and both he and his wife were longtime supporters of the Fraser Institute, the voice of the Reform movement . If you want to read a good book that follows the money to that institute, I recommend Not a Conspiracy Theory: How Business Propaganda Hijacks Democracy, By Donald Gutstein, Key Porter Books, 2009, ISBN: 978-1-55470-191-9

3. So What DID Harper Say? The Conservative Leader's sound bite file on everything from taxes to Iraq, health care, gay marriage, nature, left wingers and keeping, By Tom Barrett, The Tyee, May 20, 2004

6. Stephen Harper and the Theo-cons: The rising clout of Canada's religious right, By Marci McDonald, The Walrus, October 2006