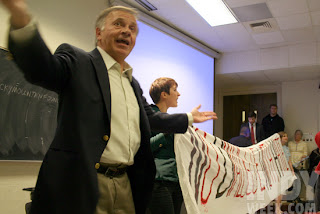 In April of 2009 U.S. Republican Tom Tancredo was supposed to speak at the University of North Carolina.

According to the Raleigh News and Observer

Before the event, campus security removed two women who delayed Tancredo's speech by stretching a 12-foot banner across the front of the classroom. It read, “No dialogue with hate.”

Police escorted the women into the hallway, amid more than 30 protesters who clashed with the officers trying to keep them out of the overcrowded classroom. After police released pepper spray and threatened the crowd with a Taser, the protesters gathered outside Bingham Hall.

Police spokesman Randy Young said the pepper spray was “broadcast” to clear the hallway. He said officers' use of force was under investigation by the department. But campus visitors and some faculty members in the capacity crowd of 150 urged the students to let Tancredo speak.

The protesters relented, and Tancredo began to speak, describing failed state and federal legislation aimed at providing in-state tuition benefits for undocumented immigrants. Two women stretched out another banner, first along one of the aisles and then right in front of Tancredo. Tancredo grabbed the middle of the banner and tried to pull it away from one of the girls. “You don't want to hear what I have to say because you don't agree with me,” he said.

The sound of breaking glass from behind a window shade interrupted the tug-of-war. Tancredo was escorted from the room by campus police. (1)

Tancredo was a controversial Republican candidate for the presidency. He is strongly anti-immigration and once suggested bombing mosques in the Middle East as a deterrent for another attack on the U.S.

He is also the honorary chairman of Youth for Western Civilization, a group financed through the Leadership Institute of Morton Blackwell. According to YWC there were about 300 protesters at UNC that night, and even the professors were encouraging the students. They also claimed that they threw rocks through windows smashing them. But according to the news report one window to the classroom where Tancreno was speaking, was broken when an over zealous protester pounded on the glass.

He later apologized and was dealt with.

However, given the expected volatile nature of his visit, why did they have him speak in such a small classroom? Why not one of the halls? The university did not try to prevent him from appearing.

It's called controlled controversy and it's one of the techniques taught in the Campus Leadership Training program at the Leadership Institute.

Unlike chapter-based political organizations, CLP clubs are unaffiliated with either the Leadership Institute or each other. According to Blackwell, this trait offers a serious advantage: "No purges." The clubs' independence also comes with the benefit of plausible deniability. "You can get away with stuff that you would take a lot of flak for doing in the College Republicans," says CLP director Dan Flynn. (2)

The Youth for Western Civilization, which has been cited as a hate group, for their pro-white messages, hosted Trancedo because they knew he would rile the student groups. They advertised heavily and deliberately made sure that the venue would not house everyone wanting to attend. Most of the people in the audience were "silent protesters".

When he spoke, they turned their chairs around, so he would be speaking to their backs. Tancredo himself, was the first to make a move when he grabbed the banner the girls were holding up. This angered those outside the classroom and the police had to quiet them with the 'threat' of a tasar which they shot into the air creating an arch.

I saw the video and it was a heated exchange, but not a violent exchange. I believe the only people hurt were the man who accidentally put his fist through the glass and Tancredo when an officer stepped on his toe.

And despite the fact they claimed that the university professors were involved, they were actually trying to quiet the students down and told them to "let him speak."

But it worked beautifully. Because despite the fact that Tancredo's message was against multiculturalism, the news the next day was about the "extreme left wing groups," their violent protests and their attempt to silence free speech. The university publicly apologized and the YWC snickered and high-fived, as they had carefully engineered themselves into becoming the 'victims'.

Ann Coulter is the controversial American comedian, in the Howard Stern vein. Her shtick is gay and Muslim baiting.

Popular during the Bush administration , it would appear that she was past her prime. That stuff is only funny to those who find it funny, for a while, and then it just gets tired and old.

But then a group calling themselves the International Free Press Society in conjunction with the Clare Booth Luce Policy Institute, sponsored her visit to three Canadian Universities: Western, Ottawa and Calgary.

Before the Ottawa event, a $250.00 a plate dinner was held for Conservative supporters, sponsored by the Ottawa Campus Conservatives and arranged by Ashley Scorpio, who is listed in the government's electronic directory, as a "... staffer working in the office of Conservative MP Gerald Keddy. She has also worked for Ontario Conservative MP Patrick Brown and was once an administrative assistant in the Harper PMO". (3)

Because of her books and columns, bashing anyone not a neoconservative, the Provost of the University of Ottawa sent Coulter a letter with a gentle reminder that Canada had tougher hate speech laws than the United States, so she should be mindful of that.

Just what her team had hoped for. Ezra Levant went nuts and turned the whole thing into a three-ring circus. According to him there were 2000 violent protesters all after her head. So threatening were they, that poor Ms. Coulter had to cancel the event because the Ottawa police warned her that they could not offer her protection.

Apparently her new shtick is making stuff up, and her side shtick Ezra Levant, played the bumbling clown.

First, contrary to what Coulter seems to suggest in a brief phone interview with Macleans.ca scribe Colby Cosh, it was not the police who "shut it down." I spoke with Ottawa Police Services media relations officer Alain Boucher this morning, and he told me, in no uncertain terms, that it was her security team that made the decision to call off the event. "We gave her options" -- including, he said, to "find a bigger venue" -- but "they opted to cancel ... It's not up to the Ottawa police to make that decision." (4)

It was clearly nothing more than a publicity stunt and a bit of controlled controversy, because the debate became about "freedom of speech, " and not hate-mongering, which was far more damaging, because we are now asked to decide whether or not we think it's OK to bash Muslims.

Because if it had been about free speech, there would have been no trouble with George Galloway visiting. And since we now know that Jason Kenney was directly behind it, the Conservatives and their supporters don't get to play that card.

But what I would like to know is who these people are who arranged her visit, and what they have to do with the Conservative Party of Canada.

Despite the fact that it was determined that Coulter cancelled the event herself, and the biggest threat was that someone jokingly commented that they would like to pie her, the website of the International Free Press Society had this to say:

It is interesting to see the aftermath of Canada’s Ottawa University after an unruly crowd of leftist and Islamic protesters through threats vandalism and intimidation, shut down a planned speech by Ann Coulter.

You can visit their site here if you want to learn more about Ezra Levant. And here. They are definitely fans.

But who are they? Three words: Islamic hate group.

Their founder, the Danish Lars Hedegaard has stated that: "The modern Islamism, which nearly all Danish imams advocates call themselves a religion, but is first and foremost a political ideology in line with communism and Nazism."

You can buy copies of the Danish cartoons from them for $ 250.00 a pop, and presently they are raising funds for the Dutch MP Geert Wilders.

The fiercely anti-Islam Dutch MP Geert Wilders has been traveling through the U.S. this week on a highly-publicised trip to meet with politicians, promote his controversial film ‘Fitna’, and raise money for his legal defence back home.

Although Wilders’s stated goal has been to campaign for free speech, his trip has been sponsored and promoted by an unlikely coalition of groups united primarily by their hostility towards Islam. His backers include neoconservative and right-wing Jewish groups on the one hand and figures with ties to the European far right on the other.

On Friday, he capped his busy week with an appearance at the National Press Club. At the event, he reiterated his calls for a halt to immigration from Muslim countries and pronounced, to raucous applause from the audience, that "our Western culture based on Christianity, Judaism, and humanism is in every aspect better than Islamic culture".

Wilders is also known for campaigning to ban the Koran, Islamic attire, and Islamic schools from the Netherlands, and for proclaiming that "moderate Islam does not exist."

... An event he held at a Boston-area synagogue was sponsored by the Republican Jewish Coalition, an influential group whose board members include casino mogul Sheldon Adelson, former White House press secretary Ari Fleischer, and neoconservative writer David Frum, who attended Wilders’s Friday event in Washington. (5)

Well there you go. David Frum and Ari Fleischer. Both Bush administration alumni and Harper insiders. Frum is a good friend of Jason Kenney, Stockwell Day and Ezra Levant, and his sister Linda, was one of Harper's patronage senate appointments. And we all know Ari Fleischer, who has been given untendered contracts by our government, to help fend off accusations of alleged war crimes.

And the Clare Booth Luce Institute is just kind of a silly Conservative women's group who publish a calendar every year of "Hot Conservative Women".

Boy is the Conservative brand ever in the gutter. Hatred and exploiting women. And they claim to do it all for Jesus. No wonder so many people are turning to atheism.

Continued: Stirring it up at the University of Manitoba