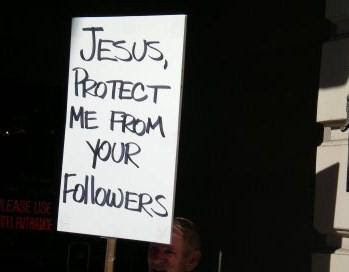 The late Charles Templeton (1915-2001), evangelical turned agnostic; wrote a book Farewell to God: My Reasons for Rejecting the Christian Faith. In it he describes his journey from a popular Christian crusader, and colleague of Billy Graham, to his eventual abandonment of organized religion.

At a stage in his life when he was beginning to have doubts about his faith, he went to his friend Graham, expecting some spiritual guidance.

He asked him how he could accept creationism as 'fact' when there was irrefutable evidence that the world had evolved over millions of years. Graham, an intelligent man, told him "I've discovered something in my ministry: when I take the Bible literally, when I proclaim it as the word of God, my preaching has power." (1)

So even if Billy Graham, the scholar, pondered the scientific proofs of evolution, he chose to focus his beliefs on the words in an ancient text, because it was better for business.

Templeton and Graham would eventually part ways, but not because Templeton was losing faith, but because he exposed the enormous amount of money that TV evangelists were pocketing from the collection plates.

He would eventually become an agnostic, because he realized that there was no single god, who was the true God. "We worship the gods of our predecessors." (1)

I often say that the Religious Right has inspired me to become a born again atheist, but I suppose I'm an agnostic, because I do believe there is something bigger than us. But if there is indeed a God, I doubt he'd be pleased that the so-called Christian Conservatives have abandoned him to worship on the alter of the almighty dollar.

Show Me the Money

Classically Liberal, a Libertarian blogger, tells the story of Bob Sirico, once a gay rights activist, and now a Catholic Priest. According to Joseph Bast of the Heartland Institute:

One often hears priests, preachers, and rabbis endorse an activist government able to solve social, economic, and perhaps even moral problems. Fr. Sirico offers a powerful challenge to this conventional wisdom. Religious principles, he says, require that men and women be free to practice virtue or vice, and freedom in turn requires a limited government and vibrant free-market economy. (2)

What the hell? I don't remember that in my Catechism. According to 'Classically Liberal', Sirico was given money from the Atlas Foundation and several other right-wing groups, to start up the Acton Institute, a right-wing think tank, run by a priest who believes in the faith of a free-market economy. Just what god is he following? Nieman-Marcus?

Atlas was, and is, a major sponsor of the Acton Institute run by former faith healer, evangelical, gay community organizer, and now Catholic priest, Bob Sirico. Sirico ran fundamentalist faith healing meetings until he came out as gay. Then he moved on to the Metropolitan Community Churches and started running the Gay Community Center in Hollywood ... He was also one of the first ministers in the country to perform gay marriages as early as 1975. Sirico’s outfit started out as an organization that was going to sell free market ideas to the religious community.

Acton officials got heavily involved in the debate on gay marriage. With Sirico back in the closet (though some conservatives don’t think so) the position they have been taking has been to pander to bigots on the Religious Right.

.... All of them forget that their beloved Father Bob performed same-sex marriages. And in one press interview at the time Sirico told the reporter “I’m hoping to be married to a beautiful man in Los Angeles whose work is translating for the deaf.” By 1977 Sirico was listed by the LA Times as the “organizer of Libertarians for Gay Rights. (3)

Apparently the good father Bob is still living a gay lifestyle, while telling his followers "not to comply with rules and laws forcing them to accept abortion, same-sex marriage and other matters that go against their religious consciences." I guess hypocrisy is now a virtue.

Classical Liberal believes that this trend began when the Atlas Foundation abandoned it's original Libertarian ideals and began preaching the gospel of the wealthy Templeton family.

Over the years institutions evolve, change or slide away from their original purpose. It is inevitable, sometimes good, and sometimes not so good. One depressing change in recent years is with the Atlas Foundation. Atlas began as a libertarian-oriented, free-market foundation that was there to help think tanks around the world with similar purposes.But in recent years Atlas has begun to heavily rely on one specific donor or family, that is the money coming from John Templeton’s foundation or estate. As they have taken millions and millions from Templeton they started pandering to Templeton’s religious bias and prejudices. (3)

One group that falls under the virtue of hypocrisy and the Atlas Foundation, is the Canadian Constitution Foundation. Started in 2002, by a devout Religious Righter, John Weston, they take on cases that challenge the Constitution, in hopes of creating "a limited government and vibrant free-market economy", as handed down from God as the eleventh commandment.

But just in case we doubt they are devout, they will end abortion, same-sex marriage and public health care, while passing laws that allow us to call each other horrific names. Which brings me to the twelfth commandment: "Thou shalt abandon common decency and basheth all gays."

If you go to their website and read their mission statement, they lie and steal in the first paragraph. First off they claim to be non-partisan, despite the fact that their new chief, John Carpay was a long time Stockwell Day supporter, and is currently part of the Fraser Institute and the Manning Centre, both duct taped to the Reform-Alliance-Conservative movement. (did I mention that their founder, John Weston, is a Harper MP?)

And the fact that they are listed as non-profit, meaning they escape paying taxes, but have money seeping from their pores, brings me to the thirteenth commandment: "Thou shalt fooleth some of the people, some of the time ..." Amen.