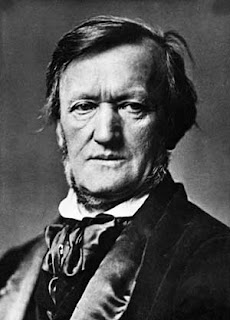 After fleeing Dresden, Richard Wagner lived in exile in Paris and later Zurich, where he wrote Das Judenthum in der Musik (Judaism in Music), which outlined his own antisemitism.

He also fell under the influence of the German philosopher Arthur Schopenhauer, and began to embrace his pessimistic views.

Though ignored during his lifetime, Schopenhauer's writings would live on in future generations, including as I mentioned before, Adolf Hitler and Leo Strauss.

'Every human life as a whole,' he [Schopenhauer] wrote, 'shows the qualities of a tragedy, and we see that life, in general, consists only of hopes gone astray, thwarted plans, and errors recognized too late.' Consequently, life is 'something which better were not; a sort of delusion, knowledge of which should remove us from it. (1)

And he often expressed the hope that "... some day a wise man would succeed in boring a hole In the earth and sinking enough powder into it to blow the whole planet to bits."

Not the cheeriest philosopher, but he certainly defined pessimism.

It is said that in later years Wagner also became interested in the racialist philosophy of Arthur de Gobineau, who believed that Western society was doomed because of miscegenation between "superior" and "inferior" races. How deep his interest was is debatable, but interpretation by others as to his interest, may have helped to launch a movement.

In 1908, 25 years after his death, Wagner's daughter Eva would marry an Englishman, by the name of Houston Stewart Chamberlain, who had expanded on Gobineau's and Wagner's ideas in his 1899 book The Foundations of the Nineteenth Century, that proclaimed the superiority of Aryan races.

First, good material must be available.

Second, the firmest, most powerful material, material endowed with definite desired characteristics, must be sought out systematically over a period of generations, and in this artificial selection you must not be sentimental. The exposure of sickly children, says
Chamberlain, 'was one of the most beneficent laws of the Greeks, Romans, and Teutons.'

Third, this good material must for generations be kept pure by inbreeding; that is, by 'producing offspring exclusively in the narrower tribal circle, avoiding all admixture of foreign blood.'

The fourth and deepest secret of all race-making; 'The genesis of extraordinary races Is Invariably preceded by a blood mixture. As an example, Chamberlain cites the particularly gifted Germanic tribes of Franks and Saxons, mixtures of Germanic and Slavic blood; and, as the finest example, he considers a nation arisen in the last three hundred years from blood even more mixed; the Prussians.

And when by this fourfold process discovery of good material, natural selection, mixture, and finally inbreeding a new race has arisen. (2)