Edith Gostick was one of the first Social Credit MPPs, elected to the Alberta legislature during their landmark victory of 1935. She had been an early member of the New Age Club, once of the more elite of the Social Credit study groups, and indeed was one of the few wealthier members of the party, who along with Ernest manning was classed as a petite bourgeoisie.(1)

She was one of the more zealous social credit pioneers, said to be matched only by Aberhart himself, for it's staunch defense.

Travelling across the province she would become known for her boundless enthusiasm and energy. Edith was also responsible for rallying women to join the party and became the scourge of political opponents for her visceral attacks. (2) 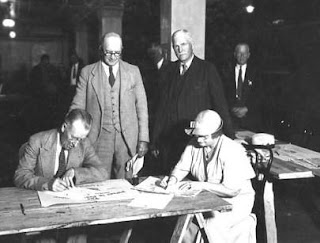 Gostick (shown seated above) would become the librarian for the party, where she handled publications, including their vast collection of anti-Semitic material. When Aberhart tried to license newspapers, as part of his battles with the press, Edith denounced the media as "the mouthpiece of the capitalist system".

She also claimed that reporters and editors were paid for "misinforming the public." When she lashed out at one, the Hill River Times, they countered by saying that "licensing will be the first step to ending freedom of speech." (3) They fought it and won.

Gostick would have two sons, William and Ronald, and growing up in a home where anti-Semitic rhetoric was the norm, the latter would become one of the largest publishers of hate propaganda in the country. He too would join the Social Credit Party.