Gary Goodyear and the Harper Government's Attack on Science 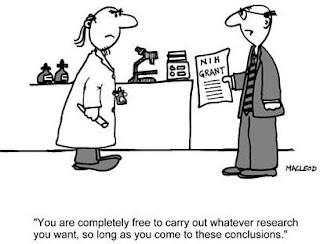 In 1995 Ontarians elected their first neoconservative premier, Mike Harris. It was an experiment that failed badly due in large part to the fact that many candidates who rode the wave of the movement into power, had no government experience.

Many were from rural areas and lacked higher education.

On the surface this is not a problem. Rural communities need a voice and who best to speak for them, than one of them.

However, the difficulty was in choosing a cabinet, because ministers not only speak for their constituents but for their 'clients' who fall within their mandate.

Now Harris had people in his caucus who could have represented the interests of these groups. Who had enough (and often more than enough) expertise to understand the needs of schools, farmers, etc. But that is not how neoconservatism works.

Harris wanted to tear down government departments, so he needed ministers who would become the nemesis of their 'clients'. Ministers who were 'movement' oriented and knew what had to be done. If they felt any empathy or concern for the problems facing these 'clients', that would run contra to the neoconservative agenda.

First and foremost, Mike Harris chose people like himself. That meant white, middle-aged men. It also meant self-made men were in and well-educated
upper-middle-class ones, for the most part, were out. In addition, Harris picked a third of his cabinet from rookie MPPs with no experience in the legislature, let alone the cabinet. The advantage, for Harris, was that they would always perceive themselves to be in his debt. After all, they had been elected on his coat-tails ... The combination of these two selection criteria alone was likely to cause serious problems for the government, but Harris did not stop there. Ignoring conventional wisdom once more, he deliberately (and some would say perversely) placed individuals in portfolios for which they had no relevant experience or training.

His theory was unique, but understandable if one considers his neoconservative perspective. (1)

So in Harris's world the Minster of Agriculture did not speak for the farmer, but promoted fewer farmers and lower prices, which meant more imports. The Minister of Education did not speak to the quality of education but only to reducing the number of schools and teachers, promoting private education.

In her new book, The Armageddon Factor, Marci McDonald discusses the appointment of Gary Goodyear to the Science portfolio. Goodyear was an obscure backbencher who had dropped out of university and instead chose a career as a chiropractor. This doesn't mean that his chosen path was not in the scientific field. Far from it.

However, McDonald suggests that Stephen Harper chose Goodyear in part to exact revenge on academics and climate scientists. (2) After all, their demands stood in the way of big business.

But she also draws on the fact that Gary Goodyear is a devout Baptist who 'embraced a personal belief in creationism' and 'regarded evolution as a theory concocted by scheming humanists in academia to undercut the very foundations of Christian doctrine.' (2)

So to Goodyear he would be the foe of the science community because they threatened his beliefs. Ignoring the fact that scientists could use their "God given" talents for the betterment of mankind, he was only concerned that their 'theories' violated the Old Testament.

So though I'm sure to some degree Harper liked sticking it to the academics, who are often viewed as the enemy of the movement, I think his choice of Goodyear was to appease the Christian fundamentalists who represent his base. This was a clear message that with Goodyear at the helm, funding to scientific research would become a thing of the past.

Unless that research was to prove their theory, that mankind evolved from one man and one woman, Adam and Eve. The fact that if this were true, early generations came about as a result of incest, did not factor in.

In 2003, Stephen Harper gave a speech to the secretive Civitas Society, of which Jason Kenney is a founding member. Donald Gutstein, author of the book Not a Conspiracy Theory* (another must read), covered the meeting and reported on Harper's views:

The state should take a more activist role in policing social norms and values, Harper told the assembled conservatives. To achieve this goal, social and economic conservatives must reunite as they have in the U.S., where evangelical Christians and business rule in an unholy alliance. Red Tories must be jettisoned from the party, he said, and alliances forged with ethnic and immigrant communities who currently vote Liberal but espouse traditional family values. This was the successful strategy counselled by the neocons under Ronald Reagan to pull conservative Democrats into the Republican tent. Movement towards the goal must be "incremental," he said, so the public won't be spooked. (3)

The only route, he [Harper] argued, was to focus not on the tired wish list of economic conservatives or “neo-cons,” as they’d become known, but on what he called “theo-cons”—those social conservatives who care passionately about hot-button issues that turn on family, crime, and defence. Even foreign policy had become a theo-con issue, he pointed out, driven by moral and religious convictions. “The truth of the matter is that the real agenda and the defining issues have shifted from economic issues to social values,” he said, “so conservatives must do the same.”

Arguing that the party had to come up with tough, principled stands on everything from parents’ right to spank their children to putting “hard power” behind the country’s foreign-policy commitments, he cautioned that it also had to choose its battlefronts with care. The social-conservative issues we choose should not be denominational,” he said, “but should unite social conservatives of different denominations and even different faiths.” (4)

Exploiting religious beliefs is unconscionable, but just how far is he willing to take this? One of his mentors, through Charles McVety, is John Hagee who believes in "God's Foreign Policy". And what this means is that Israel should be left alone to do their job, which he explains is to launch a nuclear attack in the Middle East. Are those the foreign-policy commitments of the "theocons" that he's willing to endorse?

Goodyear Does not Disappoint

Carolyn Abraham wrote a comprehensive piece for the Globe and Mail, concerning the attack of Gary Goodyear on Canada's scientists. Mike Harris himself couldn't have selected a better soldier for the mission.

The screaming erupted last Wednesday afternoon, just down the street from Parliament Hill, in the offices of a Conservative cabinet minister. Two officials with Canadian Association of University Teachers sat on one side of a boardroom table and on the other sat Gary Goodyear, Minister of Science and Technology, his policy adviser Wesley Moore and a civil servant ready to take notes.

CAUT, a lobby group that represents 65,000 staff at 121 colleges and universities, had planned to raise concerns over the government's handling of research funding. But within moments, it became clear they wouldn't get very far. “The minister was very angry,” said David Robinson, associate executive director of CAUT. “He was raising his voice and pointing his finger … He said everyone loves their [federal budget] and we said, ‘A lot of our members don't love it'… and he said, ‘That's because you're lying to them, misleading them.'” The talks, Mr. Robinson said, went from bad to worse. In 15 years on the job, he “never had a meeting like that.” (5)

The battle lines were clearly drawn and this was going to be war.

... The most common complaint since the Conservatives came to power in 2006 is the lack of support for the three arm's-length agencies that finance basic research: the National Science and Engineering Research Council, the Social Sciences and Humanities Research Council and the Canadian Institutes of Health Research.

After years of double-digit budget increases in the early 2000s, government contributions in recent years to NSERC, SSHRC and CIHR have barely kept pace with inflation – and last year they underwent a government-mandated strategic review to reduce their spending. (5)

And while the government claims to be investing in 'science', and have indeed poured millions into the ministry, much of it has gone into the repair of buildings which should have fallen under a different mandate.

The Only Adversary in a Culture War is Secrecy

The media has recently begun talking about a culture war, between the Reform-Conservative Movement and the opposition parties. No doubt Harper will try to paint this as an assault on Christianity. He is already suggesting that his caucus is under attack because they go to church.

But it's not as simple as that.

This is not about their religious beliefs but the secrecy. If they really believe that this is what Canadians want, why not lay it out there. Tell us that they think that homosexuals should be "cured". Or that they not only oppose abortion but contraception and any form of family planning, that goes against "God's plan", which is for women to keep popping out babies until their uterus explodes.

And they don't just want the Canadian government to only consist of Christians, but they have to be "Born again" Christians. Lay that out there.

And if the reason why the Religious Right in Canada is accepting millions of dollars from the Religious Right in the United States, is because they believe that we are Narnia of the C.S. Lewis novel and that Canada will play a significant role in the end times, lay it out there. Shouldn't we get to decide whether or not we want to host this little shindig? I may be busy that weekend.

But the one I have the most trouble with is that they don't believe there is a place in the world for Muslims.

Link Byfield was an early Reform party supporter. He is also a member of the Civitas Society, and his father was a founder. Several years ago he and Stephen Harper helped to found the Northern Foundation (6) which was to be a vanguard group for the Far-Right. He is also on the executive of the new Wildrose Alliance Party in Alberta.

He spoke at a REAL Women's** conference about three possible outcomes to our future.

Scene I. If Islam Prevails ... "An invasion by Islam will not be by force of arms, as they do not have the technology for that. The power of Islam is in its birth rate. Islam cannot be removed or replaced, and it grows by way of its large families ...

Scene II. If Materialism (Secular Humanism) Prevails ... To populate the nation, society has implemented the ideas set out in Aldous Huxley's book, "Brave New World." For example, we are increasingly playing with providing babies in nurseries without mothers and fathers and families, just as predicted by Mr. Huxley ...

And yet there is no 'Scene' where harmony will prevail. Where Christianity and Islam can both survive. And what about Judaism? Buddhism? Hinduism? What they see is a final, no holds barred, contest between Islam and Christianity. A fight to the finish.

I'm revisiting some of my old postings on the threat of the Religious Right, because it appears that we may finally be debating this issue in Canada, and that's a good thing.

So I just want some honesty. Is that too much to ask?

*REAL women were also under the Northern Foundation's umbrella.

4. Stephen Harper and the Theo-cons: The rising clout of Canada’s religious right, By Marci McDonald, The Walrus, October 2006, Pg. 2

7. REAL Women of Canada 2002 Conference, "The Impact of Feminism on Society".