Creationism vs Evolution: A Misguided War 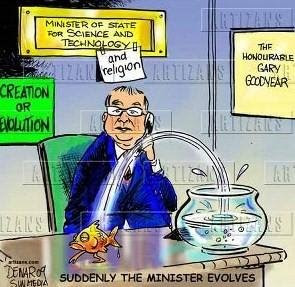 When Gary Goodyear was asked if he believed in Evolution, he said that it was inappropriate for a reporter to ask him about his religious beliefs.

However, it was a question about science, and Mr. Goodyear is our science minister. If he doesn't believe in the Theory of Evolution, then he should step down. It's like having someone head up Jewish policy who is a Holocaust denier. They just don't fit.

Canada's science minister said that he didn't answer a question about his views on evolution because he says the question is "irrelevant" to his portfolio.

Gary Goodyear, minister of state for science and technology, sparked a controversy when he refused to tell the Globe and Mail whether he believes in the science of evolution. His portfolio was already under fire because of cuts to scientific research councils in the most recent budget ... When asked by the newspaper about evolution he responded, "I am a Christian, and I don't think anybody asking a question about my religion is appropriate."

But when asked again on Power Play if he believed in the theory of evolution he responded, "Of course, I do." "We are evolving every year, every decade. That's a fact, whether it's to the intensity of the sun . . . or to the effects of walking on concrete. (1)

This doesn't have to be about religion vs science, but both should be able to work together. The Vatican has said that Charles Darwin's theory of evolution is compatible with Christianity. The Church of England has also worked to play up Darwin's role in their church. But if Goodyear is unable to do his job because of his religious beliefs, he should step down. 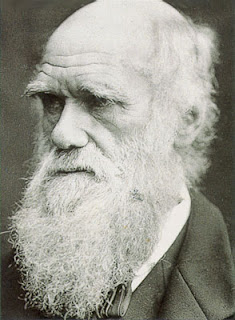 However, Goodyear's beliefs are part of a much larger problem. Fundamentalists want creationism taught and evolution discarded because they believe that it is only a "theory". A proven theory but still just a "theory".

The problem with teaching the creationism from the Bible, is that it excludes many other religions, who have their own ancient spiritual versions of the event.

In early Greek mythology, it was the Titan Prometheus who created man. The Titans were the elder gods who ruled the world before being overthrown by the Olympians. It is said that Prometheus shaped man out of mud and that the virgin goddess Athena, daughter of Zeus, breathed life into his clay figure.

In ancient Mexico, the supreme God was Ometeotl, who being both male and female, spawned four sons. These offspring were then responsible for creating earth, water, heaven and hell.

In Eastern Canada, where I was born, the Canadian people believe that the Great Spirit Glooscap was responsible for their creation. He fell from the sky in a canoe with his brother Malsum, and anchored at Uktamkoo (now Newfoundland); an island that magically appeared for their use. Glooscap shot arrows into an ash tree, and out stepped men and women. They were strong and graceful with light brown skin and shining black hair, and he named his people Wabanaki. He then created animals from rocks and clay and while they were originally large and ferocious, he tamed them to be servile, and provide his people with food and clothing.

Norse legend also uses the imagery of trees as the roots of mankind. Their Garden of Eden was Midgard. (Mana-heim), originally inhabited by the gods, Odin, Hoenir and Lodur, who were responsible for creating the universe. One day when they were strolling around Midgard, they noticed two trees, an ash and an elm and decided that humans should be created with the same strength and beauty that they possessed.

So Odin endowed them with souls, Hoenir granted them motion and sense, and Lodur gave them “blood and blooming complexions”. The trees had become man and woman, and the gods left them in Midgard to do what comes naturally.

The ancient Sumarians accepted Adam as the first man, but referred to him as a Pasisu-Priest of the Anunnaki tribe, a mythological race of people, found primarily in the Middle East, India and South Africa and we can certainly trace the migration of people from those regions into Europe and eventually North America. His father was "Enki, Lord of the Earth and Waters" and Adam was genetically created by mixing his father's blood with that of a Homo-Sapien. The first test tube baby, so to speak.

The creator of the Germanic people was Ymir; the Aztec, a plumed serpent named Quetzalcoatl; the Pawnee, Tirawa, also known as the 'Arch of Heaven' ; the Iroquois, Hahgwehdiyu and the Navajo Estsanatlehi, wife of the Sun god, who lived alone in a “house that floats on the western waters”. One day, when she was feeling lonely, she created men and women from small pieces of her skin.

Even the Bible is viewed by modern and liberal minded theologians as a series of historical documents written by human authors, who were trying to promote their group's spiritual beliefs; and like any other book, it contains factual errors, distortions and exaggerations. This is not a put down to any of the saints who contributed to its pages, but we have to remember that it was written before the age of technology and scientific understanding, when people needed explanations to appease their fears; no matter how unbelievable those explanations may have seemed.

But, regardless of whether we believe that we sprang from man and a rib; were created through extraterrestrial activity, stepped out of a tree or swung from it’s branches; our religious beliefs stem from the need to explain the unexplained and to envision the image of our creator or creators, as mirroring our own; but with exceptional powers that cause them to rise above mere human form.

And whether that is God, Goddess, Great Spirit, The Creator, The Lord, The Almighty, Yahweh, Allah, Abraham, Jesus, Buddha, Brahman, Dalai Lama, Allah, The Tao, or one of the many others, their teachings are laid down to give humankind direction. However, it's also quite acceptable to follow none of them or no one at all.

Science should be embraced because as it unravels life's mysteries, allowing us to focus on the positive side of our spiritual beliefs: helping our fellow man.

But if schools really want to teach creationism they need to make it part of religious studies, not science class, and allow students and parents to decide whether or not they will take the course.

In her new book The Armageddon Factor, Marcie McDonald discusses a situation that occurred at the Abbotsford School Board when creationism was added to their curriculum. (2) When it was discovered it created quite a controversy.

From a column in the Vancouver Sun:

"Ignorance is strength," the thought police declared in George Orwell's political satire "1984", and if there was any truth in such oxymoronic double-think, Abbotsford's schools would be turning out a mighty generation of deep thinkers.

The Abbotsford school board, guided by an evangelical Christian philosophy, requires teachers to "balance" the theory of evolution by also teaching creationism, using materials from fundamentalist sources. Many teachers, Vancouver Sun reporter Douglas Todd has found, avoid teaching creationism by not teaching evolution either.

So the schools produce students who have been taught nothing about the origins of life. They have not been told that most scientists - and most Christian churches - accept that evolution provides the best explanation available to fit the known facts and that the theory changes as more facts come to light.

Nor have they been told that some Christians believe God literally created the universe in seven days; that many Christian churches accept the Bible's creation story as metaphoric truth, reflecting the state of science at the time it was written; and that all the world's religions have their own creation myths, full of startling and delightful parallels, contradictions and insights.

Board chair John Sutherland says schools should teach ideas that reflect their communities, and Abbotsford has a large evangelical Christian population.

The board will review the way its policy is implemented, but it won't change the policy itself. It must be disheartening to be a member of a minority group in a community that won't tolerate anything outside the orthodox of the majority. But publicly funded schools should not be contributing to such an atmosphere. The Abbotsford board should scrap its policy. Evolution should be taught as a part of mainstream science. If the board wants creationism taught, it should provide courses in comparative religion. Parents who want more religious content for their children can teach them at home, or send them to church or enrol them in private schools.

If the board won't change, the education ministry should force it to. If the ministry won't act, teachers and parents should seek help from the courts, or human rights agencies. No religious group should have the right to dictate what is taught in our public schools. (my emphasis)