Give me Liberty or Give me Aaron Lee-Wudrick

Audio files, photos and transcripts leaked to the website Wikileaks.org has exposed the Ontario Progressive Conservative Campus Association (OPCCA) as hosting workshops dedicated to teaching Campus Conservatives how to take over student governments and defeat perceived enemies including the Ontario Public Interest Research Group (OPIRG) and the Canadian Federation of Students (CFS).

These files and photos, gathered from a series of workshops occurring in early 2009 on campuses across Ontario, provide evidence that, with the apparent support of representatives from both the Ontario Progressive Conservatives and the Conservative Party of Canada, the OPCCA is attempting to covertly influence the political climate of Ontario’s university campuses.

Presenters and participants are caught on tape advocating for the creation of front groups for the Conservative Party to masquerade as non‐partisan grassroots organizations, influencing the political discourse on campus, stacking student elections with Party members, and conspiring to defeat non‐profit organizations because of political differences, all with the intention of hiding their affiliations to the Party in the process.

This apparent attempt by the Conservative to interfere with student governance and undermine non‐profit organizations is ethically troubling. We urge students, journalists, and citizens alike to take action on this issue and keep our campuses free from influence‐peddling by political parties so as to uphold a strong and healthy forum for democracy. (1)

This was especially troubling given the fact that this had already been tried in Ontario, at least as far back in as 2002, when Mike Harris and the OPCCA also tried to take over student unions. 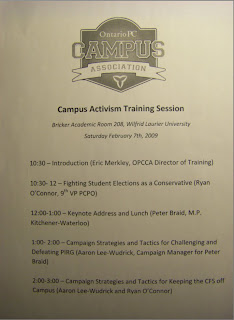 Aaron Lee-Wudrick and the Campus Coalition for Liberty

In the medium term, we want these groups to take over student governments defend against left wing organizations and create new right wing groups ... We also want to change the social atmosphere of the school ... we want the majority of students to leave college more right wing than when they arrived.

This will include hosting speakers and debates, hosting and attending conferences, holding protests and educational events, producing publications, creating social events, and all other activities that will further the organization’s mission. (2)

The above mission statement, however, is not from this new Canadian campus movement, but from it's U.S. counterpart, Youth for Western Civilization.

YWC is funded by the Leadership Institute of Morton Blackwell's, as part of their Campus Leadership Program. According to CLP's director Dan Flynn:

Unlike chapter-based political organizations, CLP clubs are unaffiliated with either the Leadership Institute or each other. According to Blackwell, this trait offers a serious advantage: "No purges." The clubs' independence also comes with the benefit of plausible deniability. "You can get away with stuff that you would take a lot of flak for doing in the College Republicans," (3)

By Aaron Lee-Wudrick's own admission:

"... even though [Ryan O'Connor] was the forced neutral [as Student President] and me as the Tory president, It was all orchestrated obviously behind closed doors, and it actually worked out well because it looked like different groups of stakeholders, like I'm the outsider coming in, and you guys were just the responsible student government and we had other members of council, a guy he appointed to council, he got speaking rights but he wasn't an elected member, but just as another voice at the table, it made it look like there were all kinds of different corners where in fact we were all on the same team. (5)

If Norman Finkelstein comes to campus, find your allied groups ... get [the Jewish students' association] involved ... if it's a radical feminist who's very pro-choice, [your allies are] going to be the pro-life people on campus.

... Find out what those rules are [for fee referendums], and in some cases that's a pre-issue for you to worry about. So let's say there are no rules. You can, the year before, say you had a three-year-plan, the next year you could -- without mentioning anything about PIRG -- get a referendum process in place which says, if you are able to collect three percent of all signatures of the student body, then you can trigger a referendum. Very few people in the abstract would oppose that, because they'd say "oh, that's a great idea" ... and then, a couple of years later, use it to bring forward the issue ... You will be surprised at what people will sign if you put it in front of them, especially if you put it in benign terms.

... Campus Radicals for Action on Zimbabwe Yes, or something like that, they were a great shell group. Feel free to use Campus Coalition for Liberty, that's ours so we have a logo and everything. You can use it now and it would be like established in 2002 ... we joke about these shell organizations, and some of you might think "well, isn't that a little bit disingenuous? Aren't you just inflating your numbers, isn't that kind of underhanded and sneaky?" My answer to that is no, not really, because that is exactly what the left does ... I'm just trying to level the playing field. (cite?)

... Use groups that might be jealous of what OPIRG gets ... that's how you pitch it, just look up the president of the chess club, and say "hey, how come you don't get money, wouldn't it be fair if we all did?" and build allies that way. (5)

When Aaron was doing the petition campaign, which "I knew nothing about;" I was printing them in my frickin office in student government, of course I knew about it, of course we were behind it, I couldn't take a public position on that issue because although I wasn't running for reelection, this was three months before the end of my mandate, that's sort of the picking your battles ... if we had made them an issue, no Tory would ever get elected to student government again ... All the Tory [student] councillors were all voting the same way, and all had the same speaking points, it was really hilarious and really transparent, but you have to do what you have to do. We had a game. (6)

Why do we go to the conventions, right? Sure, there's the all-important constitutional amendment section. But there's also the hospitality suites, right. And that's part of the fun of all this. And there's nothing wrong with that.

... Don't make [your campus club] a partisan organization ... There's ways to get around [the rules] ... start a club called Friends of Liberty or something like that, register with OPCCA as a conservative club. It's a separate registration when you register for the party, you get recognized separately, and then register with the student association.
...
Yeah we had a front group like that: the Campus Coalition for Liberty. It was really just a front for the conservatives, but it gave us like two voices. Two organizations support this, the Young Tories and the Campus Coalition for Liberty, which is the same thing ... Don't think that the Party doesn't like that, because they do. They're things that will help the Party, but it looks like it's an organically-grown organization and it just stimulated from the grassroots spontaneously. They love that stuff.

And they don't have to bear the burden of having any of it attached to their name. Remember all of the Rallies for Democracy* ... that's just an example of how big those things can get. (6)

Aaron Lee-Wudrick was not only, by his own admission, involved in this covert student movement, but he was President of the Legal society. This brings a lot of things into question, especially since this man is also now a lawyer, though one comment on a forum about Aaron after mentioning his profession, claims that he is not a lawyer "in that way" but in the "Liberty" way; so I assume that means constitutional challenges.

You can listen to the tapes here. Just scroll down to the two items with MP3 in brackets.

* Rallies for Democracy were protests against the proposed 2008 coalition.