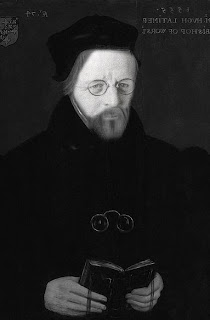 Ernest Manning's son Preston would later be inspired by Abraham Lincoln's challenge to the established parties, creating the Republicans, when he launched his own 'Reformation'; but for Ernest and William Aberhart, they were reliving the lives of two sixteenth century Reformation martyrs, Nicholas Ridley and Hugh Latimer, who were burned at the stake for upsetting the English religious hierarchy. 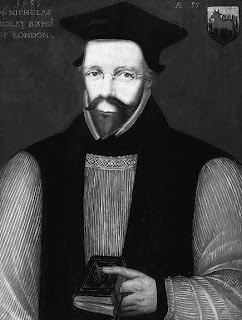 Manning: Do you remember when Latimer and Ridley were suffering martyrdom it was believed that this would dampen the enthusiasm of the whole movement? It would soon die out after this. But it didn't. Why even when they were being burned at the stake Latimer said, "Play the man Master Ridley for we shall today light a fire in England that will never be put out." *

Aberhart: But, Charles you do not mean that the Social Credit idea will never cease do you?

Manning: Yes I do. It must be the basis of the new era of civilization.'

Aberhart and his lietenant were not starting a political party, they were on a crusade, and saw themselves as martyrs to the cause. And they played that card whenever they met opposition.

And as the Social Credit crusade gained momentum, so to did the image of a man on a divine mission.In the lead up to their first convention in Red Deer, on April 5, 1935, the editor of the Social Credit Chronicles, Charles K. Underwood, wrote:

There is one important thing you happen to be blessed with, YOU POSSESS A LEADER WHO IS ONE MAN IN A MILLION, a man of foresight, a man of ntelligence and a man with GOD GIVEN GUIDANCE....

There is one great thing that your worthy leader relies on, the same thing that men, like Gladstone, Salisbury, Gordon, Kitchener, Cromwell**, Nelson, Laurier, Lincoln*** and other noted statesmen and soldiers of history relied on, that one thing is PRAYER. In this scientific age this may seem superficial, but in spite of the advances of science that same faith in the Almighty, after all is said and done, He is the only real guide in this great question, He and He alone is the mainstay of the whole business, and the very minute God Almighty stays away from Social Credit then you may just as well throw away your aspirations and intentions for this cause into the discard, you may just as well go home and forget it. Pray for that great guidance from Him; if your leader Mr. Aberhart can do it, with courage, hope and success, surely you as delegates can do likewise. (1)

These good Christian soldiers would certainly fight for the cause. And they even had their own Battle hymn, "God Our Help in Ages Past" which opened every event, though the lyrics were altered to suit:

Who is he in yonder hall
Calling to Albertans all?
Aberhart 'tis he with glory
Sending forth a wond'rous story.... ****

And if critics objected to his combining politics and religion, he had an answer. When one suggested that "the leader of this movement has used and is using a tabernacle built in the name of religion to promote what is rapidly becoming a political party" He responded:

That surely is a polite way of saying it. "We are very religious down here at the Herald. We do not believe in mixing our religion with politics ...... You know I have always believed that a religion that amounts to anything should be practised in every span of life.... The day is past when religion should be put on the shelf and taken down on Sundays. (2)

And when he criticized for using his radio pulpit to announce Social Credit events and policies, he retorted:

To argue with him was to defy the Bible. One listener even wrote a brief note to the Calgary Herald in warning: Just as God chose Moses to lead the children of Israel out of bondage, we firmly believe God has also ordained Mr. Aberhart a second Moses, who will lead the people of Alberta into a better and higher standard of life and into their rightful heritage.... No one else stood a chance.

* Hugh Latimer to Nicholas Ridley during their October 16, 1555 exectution

** When Preston Manning launched the Reform Party with Stephen Harper as his lietenant, he likened it to the launching of the Republican Party. Lincoln would also often suggest that 'God was on his side', even during the worst carnage of the Civil War.

***Oliver Cromwell is a favourite with fundamentalists since he was the first military leader to choose his subordiantes based on their fatih and gave his crusades a holy purpose. Forget that he slaughtered thousands of Irish and Scots. God was still on his side. Aberhart also stated many times that he treated his classroom as a battlefield where he was Oliver Cromwell.

****Many of Hitler's followers also beleived that he was on a divine mission and changed the words to "Silent Night':