Chapter Seventeen Continued: Getting in the Race 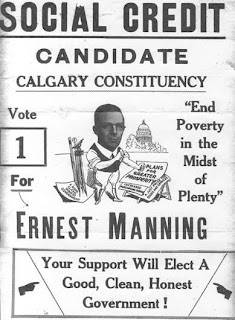 Once William Aberhart decided that he was going to form a Social Credit Party to contest the next election, he went at it with his usual gusto.

The campaign was described as something that Alberta had never seen before. There were Social Credit songs, poems, poetry contests, bake sales, more picnics and lots of campaigning.

A straw vote conducted before it's launch had favourable results, so they felt pretty good going in.

But rather than conduct this as a political move, they treated it like a crusade. This was the Reformation redux: "One of the finest amid greatest exponents of Social Credit was Jesus Christ himself. His one mission in life was to feed and clothe his people..." he wrote in the Social Credit Chronicle.

How could they fail if they Jesus on their side?

And he would use his radio broadcasts to make announcement regarding Social Credit policies, upcoming meetings or events, prompting one clergyman to write:


No other party in this election contest has used a church pulpit and cheap broadcasting time, cheap because it is supposed to be for religious purposes, to broadcast news and make announcements of political meetings, giving instructions to speakers and candidates, etc. Nor has any other political party in this election enveloped its political doctrines with the sing­ing of hymns and the praying of prayers and the building up of a Sunday School and a Back to the Bible movement. Nor has any of those contesting this election, excepting the leader of the new political party, imported a foreign evangelist to talk about the love of God for humanity in one sentence and then in the next cast aspersions on their political opponents suggesting that they were evil smelling, like nigger babies (so said the evangelist) and getting a laugh from an audience supposed to be assembled for religious worship.... What other political party in Canadian history ever descended to such base tactics ?(1)

But he just kept soldiering on:

The principles of the old-line politicians and their henchmen are like those of the man who betrayed the Christ. Gold was his god and millions have suffered because of it. The money changers upheld his right and crucified the Christ and they have been crucifying everyone since who follows in the steps of the Saviour.... Are conditions not similar today to those when the Master took a whip of small cords and drove the money changers out of the temple? Do not the common people need leaders and shepherds today, the same as in the days when the Christ had compassion on them and fed the 5000 with five loaves and two small fishes? The Easter message is a message of hope. There is deliverance. There is salvation. God can and will work even a miracle to bring his people into the place of joy and prosperity. Is that not a message for all believers in Social Credit."

And despite the fact that his opponents were also Christians, Aberhart clearly laid claim to the Bible, in all of it's misrepresentation. The Gospel according to William would prevail no matter what.