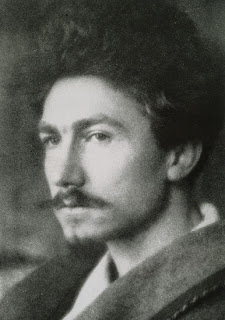 The relationship between Major Douglas and William Aberhart was deteriorating and it was becoming clear that the new Alberta premier was over his head.

Douglas declined an invitation to come to Alberta to help straighten things out, partly because Aberhart refused to cover his expenses.

He really had no idea how to go about adopting Social Credit principles, so he sought the advice of Eugene Sydney Woodward, a former grocery store owner and alderman in Victoria, British Columbia. (1)

He was then living in Vancouver where he ardently studied the economic principles of Silvio Gesell. Woodward had also been in contact with the poet Ezra Pound, a devout social credit follower who offered to come to Alberta in Douglas's place. However, after hearing of the mess that Aberhart was making of things, he declined. (2)

One of Silvio Gesell's ideas was that money should depreciate the same way that goods do, and then people would be more encouraged to spend it, which would keep the economy going. And it was based on this notion, that the Alberta government began creating Prosperity certificates which were dubbed "funny money".

They began paying wages and overdue accounts with the paper money they had simply created, so that when the recipients took the certificates to the bank, they naturally wouldn't honour them.

The Alberta government had also defaulted on their bond and were being sued. They were forced to raise and create taxes, but were still in serious trouble.

Aberhart was also becoming more confrontational and irrational, refusing to deal with anyone. If they crossed him he attacked them on his radio program, and many in the religious community complained that his broadcasts had become almost exclusively political, interjecting government positions with scripture. He was out of control.

And his new 'scrip' system was creating chaos. Wholesalers and department stores refused to accept it though Aberhart did make a few concessions, allowing them to trade it for cash to pay out of province suppliers, and also allowed residents to pay their sales tax with it.

However MLAs were frustrated, because this had nothing to do with social credit principles. The principles they had campaigned on. But when one voiced his displeasure he was thrown out of caucus.

Several of the M.L.A.s got together and contacted Douglas to intervene, but he said he would only do so if Aberhart was removed from office. To quiet the dissent, Aberhart agreed to start a registration program for future dividends, that required citizens to sign a cove­nant ''to co-operate most heartily'' with the Alberta government. A second requirement was that citizens exchange their Canadian currency for "Alberta Credit" and that they make no claim upon the government that they be paid in Canadian currency for their "Alberta Credit," nor were they to use "Alberta Credit" in the pay­ment of taxes, licenses, or fines until the government changed its policy.

Along with the registration covenant, citizens had to complete other forms disclosing all of their assets, liabilities, sources of income, and other personal informa­tion. Special registration forms were designed for farmers and merchants; farmers had to sell 50 per cent of their produce in exchange for "Alberta Credit. Fine print on the forms indicated that in order to retain the right to obtain dividends, citizens would require the permission of the local manager of the State Credit House if they desired to leave the province for more than one month (3)

The authoritarian, even totalitarian overtones of this program brought immediate cries of "fascism" from many of Alberta's leading citizens. The "League of Freedom'' was formed by F. Sorry, an Edmonton bookstore-owner, to fight the proposed registration program, after he had been told by an M.L.A. that if he refused to sign, he could lose his business license.

"The Alberta Social Credit government proved to be a total failure so far as monetary reform was concerned ... He [Aberhart] revealed himself to be incompetent as an economic reformer, though a successful demagogue." (2)