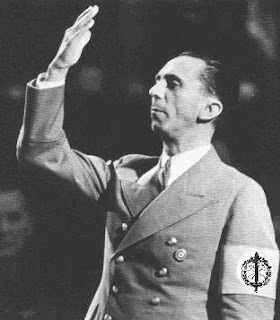 Before club-footed little Dr. Paul Joseph Goebbels became Adolf Hitler's Minister of Propaganda and Public Enlightenment, he used to say that nothing was so good for a hostile editor as "one litre of castor oil." Lately Minister Goebbels' methods have grown less rudimentary. Last autumn, he "consecrated"' the German Press to Nazi service with a law that made it a crime to practice journalism in Germany except as a member of a nation-wide closed shop. (1)

The fact that Joseph Goebbels took complete control of the media in Germany should have been alarming to all German citizens. So why wasn't it?

So much of the success of the neoconservative movement comes from deception, hidden meanings and yes even "doublespeak". And one common deceptive strategy is creating a persecution complex.

'Goebbels did not take over the media to control information. He did it because everyone else was against him'. But these claims wouldn't mean much coming from him so they had someone else come to his "defense". Enter Hans Fritzsche. 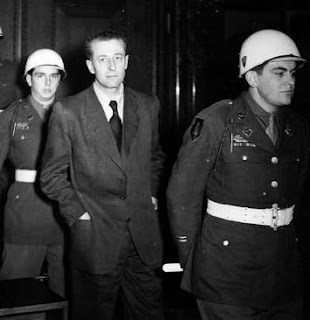 "Nothing is more fatal to a people than the mania for great reforms, however excellent these reforms may appear theoretically." Gustave Le Bons

Han Fritzsche (1900-1953) was a Nazi propagandist working in the department of Joseph Goebbels, heading up the radio division. The image to the left was during his arrest but he was later acquitted because he had not taken part in the atrocities against Jewish citizens.

In fact, he tried to put a stop to their anti-Semitic publications. His interest was solely the movement and doing what he could to promote it and the German nation.

In 1934 Fritzsche wrote a piece defending Goebbel's ultimate control of the media, suggesting that his actions were necessary to counter liberal bias. Now he does blame the Jewish people to a certain extent, at least for their impact on the media.

But thanks to publications like the Protocols of the Elders of Zion; communism, liberalism and Judaism were all twisted to mean the same thing.

Dr. Goebbels and his Ministry
by Hans Fritzsche

It is but five minutes from the dark and smoky business office of 1926, which had the mocking name opium den, to the Leopold Palace. The road took Dr. Joseph Goebbels through a sea of poison and hate and lies. Each old follower of Adolf Hitler, each old National Socialist, had to withstand battles that no young party member will have to endure, no matter how long he lives. But no one had to face as much hate as Dr. Goebbels.

It was almost open season on Dr. Goebbels during the six-and-a-half year battle for Berlin. At first he was called the "Chief Crook of Berlin" by the Communists — a title he accepted without embarrassment and made a title of honor. Soon the middle class newspapers and speakers declared open season on him too. He is a man of sharp phrases and pitiless language. The danger he represented had long been recognized. The entire artillery of the political battle, for which any means is justified, was turned on him. (2)

"That took Goebbels through a sea of poison and hate and lies"?

In today's neoconservative propaganda it's called Liberal Media Bias and it's a myth now, just as much as it was a myth then. And yet it's used constantly .

Eric Alterman wrote a piece for Nation Magazine entitled What Liberal Media?, and even the neoconservatives he interviewed agreed that it was part of the "big lie"

Republicans of all stripes have done quite well for themselves during the past five decades fulminating about the liberal cabal/ progressive thought police who spin, supplant and sometimes suppress the news we all consume ... But while some conservatives actually believe their own grumbles, the smart ones don't. They know mau-mauing the other side is just a good way to get their own ideas across-or perhaps prevent the other side from getting a fair hearing for theirs. On occasion, honest conservatives admit this.

... That the media were biased against the Reagan Administration is an article of faith among Republicans. Yet James Baker, perhaps the most media-savvy of them, owned up to the fact that any such complaint was decidedly misplaced. "There were days and times and events we might have had some complaints [but] on balance I don't think we had anything to complain about" ... Patrick Buchanan, among the most conservative pundits and presidential candidates in Republican history, found that he could not identify any allegedly liberal bias against him during his presidential candidacies. "I've gotten balanced coverage, and broad coverage-all we could have asked.

And even William Kristol, without a doubt the most influential Republican/neoconservative publicist in America today, has come clean on this issue. "I admit it," he told a reporter. "The liberal media were never that powerful, and the whole thing was often used as an excuse by conservatives for conservative failures." (3)

And when Stephen Harper shut out the National Press gallery he stated:

“Unfortunately, the press gallery has taken the view they are going to be the opposition to the government,” Harper told a London TV station. “They don't ask questions at my press conferences now. We'll just get the message out on the road. There's lots of media in the country who do want to ask me questions and hear what the government is doing.” (4)

Despite the fact that even foreign newspapers were writing about the unprecedented control of the government's message under Stephen Harper, he turned it around to play the victim.

The results of the unprecedentedly bitter battle the organs of the Weimar [Liberal] state and the parties were different than they had expected: He [Goebbels] hardened his weapons in the fire of this battle, and the masses his enemies attempted to mobilize against him instead joined him. It is not surprising that those who feared the oncoming National Socialism attacked with poison and gall.

It is surprising that this man, mocked, ridiculed and insulted as no one else, did not fall into deep despair and spiritual misery after those years of struggle. (2)

It was and is a war of their own creation, and yet they play the victim masterfully.

So, what's with all the whining? It's all about preventing the media from doing their job. If reporters are allowed to ask questions and rebut spin, then the Conservatives' disinformation campaign is much less likely to succeed.

And, by planting the seed of the notion that there is a media bias against his government, Harper has already achieved two related objectives. First, he is making the media more likely to be over-cautious about any appearance of bias, which will lead to more favourable coverage. Likewise, when the media does get around to reporting on his government's failures, voters may well dismiss the reports as one more example of the media conspiracy against the Conservatives. (4)

4. The media conspiracy against Stephen Harper, By Scott Piatkowski, June 1, 2006