Preston Manning, Newt Gingrich and a Republican in the House 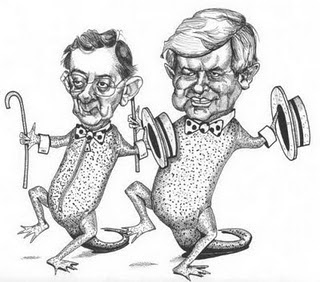 "Borrowed in part from the legacy of Ronald Reagan and Margaret Thatcher, Canadian neo-conservatism owes much of it's character to the right-wing populist tradition of the West.

"Indeed, Canadians became exporters of neo-con innovation in the 1990s. 'I would say Margaret Thatcher and Mr. [Preston] Manning are the two non-Americans we learned most from'', said U.S. Republican House Speaker, Newt Gingrich in 1995.

'I know him [Preston Manning] because I watched all of his commercials. We developed our platform from watching his campaign.' Like cowboy culture, Canadian neo-conservatism is a growth industry, spawning a whole generation of Will James outlaws in hot pursuit of political power." (1)

The political cartoon above first appeared in the Alberta Report Magazine on March 27, 1995, under the caption 'Preston Manning and Newt Gingrich dancing in newt suits'. The two men formed a lasting friendship as they worked out ways to promote combative style politics.

Republican pollster Frank Lutz had been working with Stephen Harper and the gang since 1991, and he also handled Gingrich's campaigns.

It might surprise people to know that at least some of the Republican ugliness was made in Canada.

"Newt Gingrich was no Ronald Reagan. A career politician, he was first elected to the House of Representatives in 1978, at the age of thirty-five, and became the Republican Whip in 1989. Despite this measure of success, however, he was never part of the Republican inner circle, largely because of his extreme views ... (2)

By the time the mid-term elections rolled around in 1994, a series of mini-scandals (Monica still in diapers) caused people to question the Democrat's ability, paving the way for a conservative victory. Since many of the scandals resulted in the resignation of several veterans, it was a perfect opportunity for the Republicans to replace them with hard right thinkers.

"By February 1994, many Republicans ... were upbeat about their chances of doing well in the mid-term elections scheduled for November ... An optimistic group of members of the House of Representatives met in Salsbury, Maryland, to discuss their platform ...

"Overwhelmingly male, middle-aged and white, with a large contingent from rural and southern states, they could hardly have claimed to be representative of the American people, but they were certainly indicative of the constituency that elected them." (3)

Taking tips from the Reform Party, they were ready to tap into anger and righteous indignation, by creating a platform based on five principles, they called the 'basic philosophy of American civilization'.

With racial overtones, they were not looking to generate votes from the blacks or ethnic minorities. They appealed to middle-class whites, with initiatives that sound very much like the Reform agenda. Strengthening families, tough on crime, selective immigration, the end of public welfare, weakening of public education, etc.

They then read out their manifesto in a highly publicized media event, close enough to election time that no one really had a chance to investigate them further. But it worked.

From his viewpoint as the new Speaker of the House of Representatives, a smug Newt Gingrich surveyed the battlefield and declared that the election was 'the most shattering one-sided Republican victory since 1946.'

"No one disagreed with him. Certainly not Canada's Preston Manning, the leader of the like-minded Reform Party, which a year earlier had taken the fifty odd seats in the federal election. Not only had Manning visited Gingrich for a photo opportunity, but Gingrich now attributed his electoral success to techniques he had learned from Manning and his Reformers.

"Amoung these organized religion was clearly uppermost in Gingrich's mind. The role of the evangelicals in assuring Gingrich's victory was far greater than it had been for Reagan. As Rosalind Petchesky points out in an article on anti-feminism and the New Right, this heightened emphasis of moral conservatism in the American neo-conservative movement was unprecedented. It was also producing a situation in which the party's platform was being increasingly designed to meet the requirements of these supporters.

"'What has given the New Right both ideological legitimacy and organizational coherence,' she wrote, 'has been it's focus on reproductive and sexual issues. If there is anything new about the current right wing in the United States, it is the tendency to locate sexual, reproductive and family issues at the centre of it's political program.' This was an unusual development in Canada as well ... " (3)

Newt and Preston had a lot to dance about, because while their most ardent supporters saw an end to abortion and homosexuality, they only saw dollar signs. The 'revolt of the rich' had scored a victory.