Chapter Twenty-Three Continued: At a Crossroads 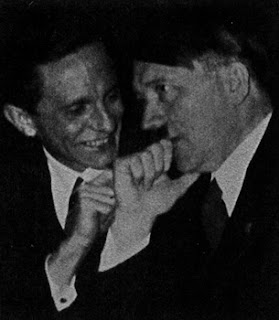 In October of 1931, German President Paul Von Hindenburg invited Adolf Hitler to a private meeting to discuss a solution to the impasse the Nazi Party was creating.

Joseph Goebbels was already proving to be a great agitator and the brown shirts were raising systematic havoc.

Rheumy old Paul von Hindenburg moves slowly but with exceeding thoroughness. Last week he did what the head of almost any other state would have done months ago. He had a personal interview with the Leader of the Opposition. All the years that the Austrian-born opportunist Adolf Hitler has been gaining political power in Germany, President von Hindenburg had never even seen him. Last week Hitler was summoned to the Presidential Palace on the Wilhelmstrasse. Tactfully changing his brown shirt for a long dark overcoat and a derby hat, Fascist Adolf arrived, his smudge of a mustache twitching like a rabbit's nose with excitement.

For once untroubled by the police, Hitlerites gathered in the street, shouting "Heil! Heil! Germany Awake!" as their leader appeared. No sooner had Herr Hitler disappeared through the doors than Dr. Josef Goebbels who had nothing whatever to do with the interview beyond the fact that he is one of the leaders of the Hitlerites in the Reichstag (when the Reichstag is sitting) drove up & down the street in an open car bowing right and left to the crowds. (1)

Hitler had marched out of the Reichstag in protest eight months before, and had since that action, increased party support tremendously.

The following year a presidential election was held with Hindenburg netting 18,600,000 votes and Hitler 11,300,000. Goebbels was frantic and telephoned his boss suggesting that they take control of the country by force, but Hitler declined. (2)

However, the Nazis continued their acts of violence that had come to mark the movement.

Nazi terrorism was attaining unprecedented proportions. Shootings, bombings, and killings were especially numerous in East Prussia. On August 3 [1932] the Socialist headquarters in Konigsberg were bombed, an oil station owned by a Socialist was fired, and a Communist leader was murdered. The Cabinet warned that disorders must cease within eighteen hours or special measures would be resorted to.

The disorders continued ... On the 8th the local Reichsbanner leader in Lotzen was murdered by Nazis, who blamed the Communists. The Cabinet hesitated. But on August 10 Hindenburg at last signed a decree approved by the Cabinet. It extended the "political truce" to the end of August, forbade all political demonstrations, provided the death penalty for political murder and arson, and set up special tribunals to try offenders. In the early morning hours of the same day five of Heines's storm troopers, after drinking heavily, forced their way into the house of a Communist workman in Potempa, one Pietrzuch, shot him in bed, and then kicked him to death in the presence of his mother, crushing his throat beneath their heavy boots. Reluctantly the local police arrested the "patriotic" culprits. (2)

In an attempt to end the violence, Hitler was again summoned to a meeting with Hindenburg and three of his officials, where he would be offered a cabinet post in the government of Franz Von Papen, whom the President had named as chancellor. According to one of the men in the room at the time:

Hitler attempted to bow, fumbled awkwardly with the doorknob, blushed, and stumbled over the rug. He began a public speech, but was silenced by Hindenburg. The President asked him whether he was willing to enter the Papen Cabinet. He refused and insisted on the Chancellorship "with the same powers as Mussolini was given after his victorious march on Rome" Hindenburg asserted that, in view of Nazi terrorism, he could not deliver the State into the hands of the brown shirts. (3)

Hitler was devastated. He had expected victory and his followers had expected victory, but instead he got a tongue lashing from the elderly president. So he returned to his mountain hideaway to lick his wounds. Some at the time were questioning his sanity. Then the news came that the men who had been responsible for the political assassinations in Silesia, had been sentenced to death. Everything Goebbels had done up to that time had come down to this defining moment, and many believed it could be the end of Hitler's political career. He had been bested by a senile old man.

Up & down Germany the question flashed last week: Had Adolf Hitler at last gone crazy? Had his nerves given way? Was he really in a straitjacket, jittering in a Bavarian asylum? He was not. Handsome Adolf was actually high in the Bavarian Alps with a few intimate friends, slowly flailing the chalky waters of mountain streams for speckled brown trout which his quiet sister boiled till blue and served on lettuce leaves for the Hitler supper. Even so the lunacy legend kept the chief Nazi pressagent, a former Manhattan print dealer named Ernst Franz Hanfstaengl, busy for two days issuing angry denials. The story was inspired apparently by two bad-tempered and most inopportune messages which the bristle-lipped leader issued immediately after live Nazis were sentenced to death at Beuthen ...

Dr. Paul Joseph Goebbels, a gnomelike little man with a tart tongue and a club foot, who appeared from nowhere about two years ago, rapidly rose to be Fascist deputy, editor of the party organ and one of the right-hand men of Adolf Hitler. Writing of the Beuthen death sentences he said:

"Never forget it, comrades, and repeat it a hundred times so you will say it in your dreams—THE JEWS ARE TO BLAME! They will never escape the tribunals they deserve." (4)

It was now open warfare and finally on the morning of January 30, 1933, in Hindenburg's office, Adolf Hitler was sworn in as Chancellor of Germany and Joseph Paul Goebbels was named his Minister of Propaganda. He could not have chosen a better man for the job.

3. Hitler and the Nazi Dictatorship: A Study in Social Pathology and the Politics of Fascism, By: Frederick L. Schuman, PhD, Robert Hale & Company, 1936