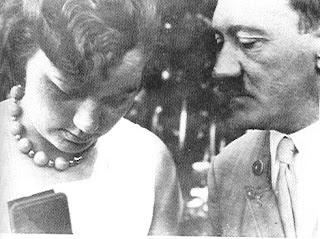 After being estranged from his family for more than a decade, Adolf paid a visit to Linz, Austria where his widowed stepsister Angela was living.

Finding her in an impoverished condition, he agreed to hire her as his housekeeper, but his interest appeared to be in her seventeen-year-old daughter, also named Angela, who went by the name of 'Geli'.

He enjoyed taking the young girl out and showing her off, riding through the countryside without a care in the world. I suppose he felt like his father, who would not return home until he'd made his fortune, and when he did, also brought his young niece back to keep house, until they were eventually married. That young girl was Adolf's own mother.

Hitler also liked to play the macho role with her, demonstrating how he "could bewitch the masses and scare his lieutenants out of their wits." (1) But not everyone was impressed, and many resented how much money he was spending on himself, while playing the role of a frugal leader.

While he didn't take money directly from the party coffers he charged exorbitant rates for articles that he wrote for their various publications, while paying the editorial workers starvation wages.

He also published his book at this time, which he wanted to call Four and a Half Years of Struggle Against Lies, Stupidity, and Cowardice, but settled for the suggested title of Mein Kampf, or "My Struggle."

In the meantime there was someone else in the party with leadership aspirations and he too had quite a following. His name was Gregor Strasser and he and his brother Otto had joined the Nazi party during the early days. They were there for the Beer Hall Putsch, that netted Gregor a year and a half under guard.

He was well educated, was a decorated officer, but more importantly was German. Hitler was not. He was Austrian, and while he applied for citizenship, he still lived under the constant fear that he would be deported.

Another advantage that Strasser had over his opponent was the fact that he was already a deputy in the German Reichstag, which meant that he could travel on the German railways for free. Thus he would go from town to town, gaining support while speaking out against Adolf Hitler.

But he did not travel alone. A constant companion was a young crippled man who had been turned down for military service, so instead studied literature and philosophy at six different universities, and was a master at propaganda. His name was Paul Joseph Goebbels, and along with Gregor's brother Otto, the three created their own political force.

Strasser and Goebbels believed that the party belonged to the proletariat; while Hitler intended that they should capture the proletariat and hold it in check. He had no real interest in socialism, only in how the fervour of socialism could be exploited.

Hitler also had the support of the Bourgeoisie, who feared losing their possessions in a socialist scheme. They provided much needed funds to the party, and eventually even Goebel jumped ship and joined the Hitler team. Strasser didn't stand a chance.

While Adolf and his niece were enjoying an intimate relationship, she was also becoming "intimate" with others. According to Geli, her uncle was impotent and rather perverse in his sexual habits. As a result she began seeing other men, including Hitler's chauffeur, Emil Maurice, and if the rumours are true, also Adolf's nemesis Gregor Strasser.

According to Strasser she shared stories of her uncle's perversions*, which fit what she had been saying to friends: "you wouldn't believe what he makes me do". (2)

In one of his unguarded moments, a desperate Adolf wrote a love letter to his niece. Well not exactly a love letter, but a detailed description of their time together, which he carelessly left lying on a table, where it was discovered by his landlady's son. Knowing that if the letter was ever made public, it would have ended his political career, he spoke to his advisers.

They decided it would be too obvious if they themselves went to the holder of the infamous letter, so instead sought the help of a local eccentric, who collected political papers. They had him buy the letter for his "collection" but Hitler paid dearly, and would continue paying.

Aiding in the scheme was Father Bernhard Stempfle, from the Catholic order of Saint Jerome; an anti-Semitic journalist, and "armed bohemian". He was a supporter of Hitler and some say his confessor. Regardless he was aware of the contents of the letter and knew that it had to be retrieved.

In the meantime Geli was becoming restless and wanted to move to Vienna to study music. Her uncle had promised to support this career move, but was not willing to let her go. They fought constantly and to add insult to injury, Adolf also had to deal with the continued embarrassment of the letter, and though rumours had already circulated about his strange desires, there was now proof. This no doubt brought up insecurities, especially given the fact that Strasser was in on the secret, courtesy of his sometime lover Geli. 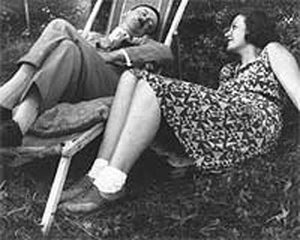 Things finally reached a tipping point and the neighbours reported that as Hitler was leaving the house one morning, his niece called down from her bedroom window, pleading one more time for permission to go to Vienna. Hitler yelled back with a firm no.

In a tone of indifference she announced that next day she was going to Berchtesgaden to see her mother, who was living in the mountain house on the
Obersalzberg. She went about the apartment with a little box bearing a dead canary, bedded in cotton; she sang to herself and wept a little and said she meant to bury poor dead 'Hansi near the house on the Obersalzberg. She began a letter to a friend in Linz an everyday letter without special content. That was her last known act. Next morning she was found shot to death. It was September 18, 1931. Geli Raubal was twenty-three years of age. (2)

*The first published statement that Hitler may have had a perversion was made in an article appearing in 1971 and drawing on a valuable psychological investigation of Hitler prepared for the OSS in 1943 by Dr. Walter C. Langer and other American psychoanalysts and clinical psychologists. This wartime report, subsequently published in 1972, reached the following conclusion with regard to Hitler’s aberrant sexual activity:

It is an extreme form of masochism in which the individual derives sexual gratification from the act of having a woman urinate or defecate on him. (3)