"The Quran teaches that all Muslims have a mandate to kill Christians and Jews. Yes, it teaches that very clearly." John Hagee

The video above was taken at a 'Christians United for Israel' conference. The first man being interviewed is Tom Lehaye, a Republican senator.

John Hagee is the author of the book Jerusalem Countdown, in which he describes an end day prophesy, where all the Jews are herded to Israel (after the Middle East is levelled). They will then accept Christianity or be slaughtered, so that born again Christians can feel "the rapture".

It might be tempting to roll our eyes or chuckle, but unfortunately a large number of people who not only believe this but feel they have to accelerate it, belong to our current government; the Conservative Party of Canada, and their supporters.

And Stephen Harper is even basing our foreign policy on the wish list of what has been called the Canadian Religious Right, which explains his unprecedented support of Israel.

Many theologians denounce his actions, and several are speaking out, but they are not being given a proper platform. One of them is Stephen Scheinberg. Dr. Scheinberg was emeritus professor of history at Concordia University (1), and Co-chair of Canadian Friends of Peace Now.

He explains how the group came about:

McVety and his associates are associated with the dispensationalist brand of the evangelical movement, a grouping sometimes termed Christian Zionists. They are fundamentalists, believing in the authority of an error-free scripture and opposed to abortion access, gay marriage, or use of embryonic stem cells for medical research, while favouring traditional roles for women and protection of the public from what they deem to be pornography.

The appeal of these extremist Christians to the Jewish right is obvious, since the prophecies of the former cannot be implemented until the return of all the Jewish people to all the lands of ancient Israel. CCanadian dispensationalist clergy are part of Hagee’s Christians United for Israel and claim to have taken a lead in establishing that organization, beginning with a telephone call from McVety to Hagee in November of 2005 to notify him that there would be a Toronto “Night to Honour Israel” the following May. Hagee is said to have replied that “there’s no reason why we can’t do the same thing in every major city of North America.”

Subsequently, on February 7, 2006, 400 pastors and others joined together at Hagee’s Cornerstone Church to establish Christians United for Israel with Christian rightist leaders Jerry Falwell and Pat Robertson prominently included and with Charles McVety named National Chairman for Canada. Others in the Canadian group are John Howarth (Executive Director), who is on the faculty of McVety’s college, Reverend John Tweedie of Brampton (National Chairman) and Reverend Dean Bye of Centralia, Ontario.

[From] Reverend Bye ... North American Jews must recognize they must all “return” to Israel and he warns: “the time of the U.S.A. being a safe haven for the Jews has ended!” ... He adds that “we don’t throw them overboard [like Jonah] but lovingly assist them home to Israel.” I believe that Bye’s implicit judgment, then, is that like Jonah North American Jews have turned their backs on God and must recognize that their only true home is in Israel.

Unfortunately for Dean Bye, most of the Jewish community has not responded to his generous proposal that they leave their homes for aliyah to Israel. 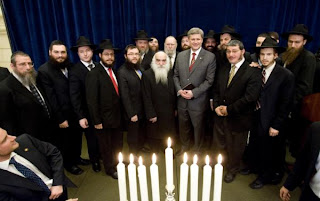 It is no surprise that Reverend McVety also has close ties to the Conservative Party. Liberal MP Garth Turner claimed that McVety told him that he can call and get Prime Minister Harper on the phone within minutes.

A good many of the party’s candidates in the last election were social conservatives, including several current cabinet members, for example Attorney General Vic Toews, Public Safety Minister Stockwell Day and Flaherty. It was perhaps through Day that McVety made his connections to Ben-Ami and then his alliance with B’nai Brith. (2)

Raising the alarm over the religious Right does not mean that you are persecuting Christians. Nor does it mean that you are denouncing evangelism. These people are Christian extremists and their beliefs conflict with those of the majority of Canadians. And yet they are the ones who are currently directing both the domestic and foreign policies of our government. This is a very dangerous thing.

We need to not only hold our current government to account, but also our media. They have a duty to inform Canadians and yet most have failed to perform that duty.

Marci McDonald has written a great book (1) on the subject, but it's still up to us to get the word out. We can think of this as our holy mission.