Spanking and Dominionism, From Kelly Block to James Dobson 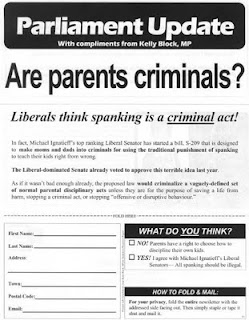 In October of 2009, Reform-Conservative Member of Parliament, Kelly Block, sent out a tax-payer funded flyer to her constituents that asked the question, "Are Parents Criminals?” The intent of this was to drum up support for her opposition to a senate bill that would see parents charged for inflicting corporal punishment on their children.

According to the Star Pheonix:

“The Liberal dominated Senate already voted to approve this terrible idea last year,” the mailout says. “(The bill) is designed to make moms and dads into criminals for using the traditional punishment of spanking to teach their kids right from wrong.”

What Block was referring to was Liberal senator Céline Hervieux-Payette's, Bill S-209. Believing as many do that spanking or any form of corporal punishment can encourage violent behaviour, the senator felt a need to introduce consequences.

She includes the following video on her site:

While section 43 of the criminal code, prohibited spanking, it did not allow for criminal charges to be laid against the person inflicting the harm.

Kelly Block was not the only member of the Religious Right to be upset.

Charles' McVety's Family Action Coalition, suggested that "... section 43 of the criminal code [is] to be rescinded. That section allows parents to use "reasonable force" to correct behaviors of their (not the state's) children. If that allowance for spanking was rescinded then any parent who reasonably spanks a child could face criminal charges of assault."

REAL Women of Canada had already presented their views on their website:

The arrogant political left, which looks contemptuously down on those who disagree with its supposedly enlightened views, is attempting to revive the spanking issue. Apparently the opinion of the Supreme Court of Canada on the subject, handed down a year ago, was only a stopgap in the onward journey to ban the spanking of children in Canada. (2)

I'm not sure what 'arrogance' has to do with wanting to protect children, but spanking has come to mean something more to the Christian nationalist movement.

James Dobson is the Founder of Focus on the Family and a leading member of the American Religious Right movement. He provided 1.6 million dollars to help set up the Canadian Focus on the Family group, founded by Stephen Harper's deputy chief of staff, Darrel Reid.

He has written extensively on the issue of spanking, and though he is a child psychologist, it's never from a scientific argument, only Biblical.

In his book, The Strong Willed Child he makes an extraordinary case to justify harsh discipline. In it he speaks of his small dog Siggie, who he claims to love very much, but when he was away for awhile, the dog had picked up some bad habits. And when he disobeyed him, Dobson retaliated. He describes the scene:

“At eleven o’clock that night, I told Siggie to go get into his bed, which is a permanent enclosure in the family room. For six years I had given him that order at the end of each day, and for six years Siggie had obeyed.

“On this occasion, however, he refused to budge. ...“I had seen this defiant mood before, and knew there was only one way to deal with it. The ONLY way to make Siggie obey is to threaten him with destruction. Nothing else works. I turned and went to my closet and got a small belt to help me ‘reason’ with Mr. Freud.”

“What developed next is impossible to describe. That tiny dog and I had the most vicious fight ever staged between man and beast. I fought him up one wall and down the other, with both of us scratching and clawing and growling and swinging the belt. I am embarrassed by the memory of the entire scene. Inch by inch I moved him toward the family room and his bed. As a final desperate maneuver, Siggie backed into the corner for one last snarling stand. I eventually got him to bed, only because I outweighed him 200 to 12!” (3)

What the good Mr. Dobson describes is animal cruelty and the fact the he outweighed him 200 to 12, makes the whole scene even more horrific. That man clearly should not own a pet.

He goes on from "destruction" being the only thing the dog understood, to the need to discipline children, and even uses capital letters:

"JUST AS SURELY AS A DOG WILL OCCASIONALLY CHALLENGE THE AUTHORITY OF HIS LEADERS, SO WILL A LITTLE CHILD — ONLY MORE SO.” (3)

And he doesn't just say a child but "a little child ", like the little 12 pound dog. And after describing ways that children will challenge their parent's authority, he states:

“Perhaps this tendency toward self-will is the essence of ‘original sin’ which has infiltrated the human family. It certainly explains why I place such stress on the proper response to willful defiance during childhood, for that rebellion can plant the seeds of personal disaster.” (3)

Nothing clinical befitting his profession, but children and "original sin".

You do get some insight into the reasons for his disturbing behaviour from this bio:

Dobson's own family was a bit out of the ordinary. His father was a preacher who often told the story that he had tried to pray before he could even talk. His mother routinely beat their son with her shoes, her belt, and once, a 16-pound girdle. His parents somehow instilled so much guilt in young Dobson that he answered his father's fervent altar-call, weeping at the front of a crowded church service and crying out for God's forgiveness for all his sins, when he was three years old. "It makes no sense, but I know it happened," Dobson still says of being born again as a toddler.

This would certainly prove senator Céline Hervieux-Payette's belief that children learn what they see. However, the spanking issue may be more complex.

For those who have studied the Christian nationalist movement, which is also referred to as 'Dominionism', submissiveness is required to make it work.

In a politico-religious context, dominionism (also called subjectionism) is the tendency among some conservative politically-active Christians, especially in the United States, to seek influence or control over secular civil government through political action. The goal is either a nation governed by Christians, or a nation governed by a conservative Christian understanding of biblical law. (4)

Movement conservatives see the end result as a nation whose laws are based on the Old Testament. There can be no exception. And they are very clear in their understanding that fundamentalist Christians must assume control of all levels of government, beginning with school and municipal boards. It stems from Genesis, where God commissions man to exercise "dominion over the fish of the sea, over the birds of the air, and over every living thing that moves on the earth."

George Grant, one of their founders (and I will be writing a lot more on this) states:

It's up to us to decide what kind of Canada we want for ourselves, our children and our grandchildren. This is not a movement with any flexibility and it does not represent Canadian values. When Stephen Harper decided to exploit the religious right for political gain, I'm not sure if he understood just what that meant. He is a "born-again" Christian, but I believe he worships on the altar of capitalism. This is now out of his control, I'm afraid.

5. The Changing of the Guard, By George Grant, 1987, as quoted in "American Theocracy: Who is Trying to Turn America into a Theocracy?
Posted by Emily Dee at 5:02 PM