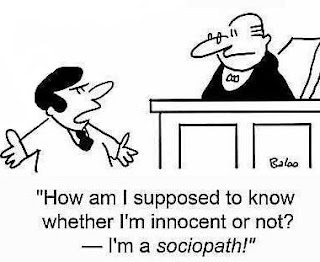 The characteristics of a sociopath might include a glibness or superficial charm. They might be manipulative and cunning with a grandiose sense of self. They are often pathological liars, with no sense of remorse. They can be impulsive with a lack of behavioural controls and a constant need to have their egos stroked.

Several of these characteristics can be applied to anyone entering the political arena, but few will be identified as having them all. And those who do have them all, I refer to as Political Sociopaths.

A political sociopath enters political life as a combatant; but with a pathological narcissism that puts their own interests above absolutely anything or anyone else. Stephen Harper himself is definitely one. John Baird another. But I think the one to best fit the profile is Pierre Poilievere.

Pierre Poilivre and the Calgary School

Like Stephen Harper, Pierre Poilievre was tapped on the shoulder by a group of neo-Conservative academics known as the 'Calgary School'. They seek out young people who are not only political junkies, but who can also be manipulative, cunning and with a grandiose sense of self. If they can feed their enormous egos, they have no trouble pulling the strings.

It is also desirable that their protegees have little or no experience in the real world. Pierre Poilievre, who it is said is being groomed as the future leader of the Reform-Conservative party, fits the bill perfectly.

Rick Mercer stated in an interview recently: "What bothers me is the trend in politics with people like Pierre Poilievre, who’s the prime minister’s parliamentary secretary. A lot of people have him pegged as the future leader of the Conservative Party of Canada and there’s absolutely no evidence the man has ever had a job. He’s an MP, and there’s just no evidence. If there is evidence, maybe he’d like to bring it forward."

When he was running for election in 2004, he stated that he was co-owner of a political research company called 3D Contact Inc., and according to the company profile, the 'contacts' were Stephen Harper, Ted Morton and Stockwell Day. His partner was Jonathan Denis, now Minister of Housing in the Alberta government.

Poilievre also claimed to have done policy work for Canadian Alliance MPs Stockwell Day and Jason Kenney, and prior to running for office himself; worked as a full-time assistant to Day.

And though born and raised in Calgary, he selected a nice middle class neighbourhood in Ottawa, winning in 2004 to become the youngest MP on the Hill. However, it would not be his age but his immaturity that defined those early years. Now it's his narcissistic, hyper-partisan combative, all fluff and no substance posturing.

His partner is Jenni Byrne, who has been named as one of the Top 100 Most Influential People in Government and Politics in Ottawa by the Hill Times:

Ms. Byrne, a backroomer, is considered an influential staffer for having a key role in staffing ministerial offices and also to craft strategy to deal with issues facing the government on a daily basis. She is the link between the party's headquarters and the Prime Minister's Office. Ms. Byrne's boyfriend is Conservative MP Pierre Poilievre, a loyal Harper foot soldier.

She has since left the office of the PMO to work at party headquarters.

Meanwhile, Harper said goodbye this week to one of his longest-serving and most partisan advisers, Jenni Byrne, who will leave her post as director of issues management to become director of political operations for the Conservative Party of Canada.
Conservative political staffers within the Prime Minister's Office and in ministers' offices say Giorno and Byrne are the two most influential and powerful political aides in Ottawa. They routinely direct the affairs of all but the most senior and trusted cabinet ministers, such as Environment Minister Jim Prentice and Transport Minister John Baird. Byrne, a former nursing assistant in her mid-30s, moves to a role currently being filled by Doug Finley

Like Poilievre, she has been actively involved with the Party, even going back to their Reform days.

Traits of a Political Sociopath
Callousness and Lack of Empathy
Poor Behavioural Controls
Sneaky and Manipulative
Cunning
Posted by Emily Dee at 10:27 AM