"Think of the press as a great keyboard on which the government can play.” Joseph Goebbels

The image of Adolf Hitler may have been established by Dietrich Eckart as he invented the Thule Society's Antichrist; but the image of Hitler as a strong and powerful dictator was at the masterful hands of Joseph Paul Goebbels.

Born into a Catholic family of humble means, Goebbels led a rather ordinary life. However, as a child he developed a club foot, and a subsequent botched operation meant that he would spend his life with a metal brace and special shoe, which gave him a permanent limp. Because of this he was refused entry into the military, though he would often explain the limp as a war wound.

Goebbels' first education was at a Christian school and then he attended a boarding school run by the German Franciscan brothers in Bleijerheide. Obviously intelligent he received a PhD in Literature and would later work as a journalist

Spengler was a German historian and philosopher and author of the book The Decline of the West. He promoted an organic version of socialism and authoritarianism, that in some ways defined the Nazi movement. He also supported a German hegemony in Europe but refused to support the Nazi ideas of racial superiority. 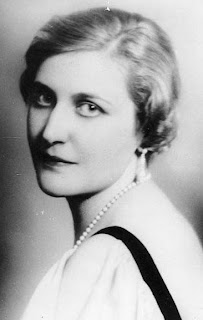 'Magda' as she came to be known, was born in 1901 out of wedlock to Auguste Behrend*, who would later marry Magda's father, Oskar Rietschel.

At the age of seventeen, she met Gunther Quandt, a wealthy industrialist and large shareholder of both BMW and what would later be Mercedes-Benz. They would eventually marry and her first son, Harald was born in 1921.

Though not before political, in September of 1930, a friend suggested that she attend a rally for the National Socialist German Worker's Party, who were creating quite a buzz across Germany.

She attended on a lark and joined the Nazi party soon after. She would say that what inspired her was listening to one of the speakers, Joseph Goebbels, and she would engage him as tutor for her young son, Harald.

Of course the inevitable happened, and when their affair was discovered, a divorce followed. Magda and Joseph were wed December 19, 1931, at Gunther Quandt's farm in Mecklenburg. (coincidentally the birth place of William Aberhart's father. The town not that farm.) Hitler acted as witness.

The Goebbels would become the extended family of Adolf Hitler, and he would visit them frequently, often accompanied by Otto Dietrich, his press chief, whose battles with Goebbels were legendary; and Wilhelm Bruckner, his bodyguard.

Another regular was Ernst Hanfstaengl, who was then a Harvard student, but would work for both Franklin Roosevelt and Adolf Hitler. He had also taken part in the Beer Hall Putsch but fled to Austria immediately after. It was at his home that Adolf Hitler hid out and his wife who talked him out of committing suicide.

Magda would remain a devout follower of Adolf Hitler and when the Russians marched into Berlin on May 1, 1945, she murdered her six children and then committed suicide. Her husband Joseph joined them.

Harald, her son from her marriage was then being held as a POW camp in North Africa, and Magda wrote him a letter two days before her death.

"My beloved son! By now we have been in the Führerbunker for six days already — daddy, your six little siblings and I, for the sake of giving our national socialistic lives the only possible honorable end ... You shall know that I stayed here against daddy's will, and that even on last Sunday the Führer wanted to help me to get out. You know your mother — we have the same blood, for me there was no wavering. Our glorious idea is ruined and with it everything beautiful and marvelous that I have known in my life. The world that comes after the Führer and national socialism is not any longer worth living in and therefore I took the children with me, for they are too good for the life that would follow, and a merciful God will understand me when I will give them the salvation ... The children are wonderful ... there never is a word of complaint nor crying. The impacts are shaking the bunker. The elder kids cover the younger ones, their presence is a blessing and they are making the Führer smile once in a while. May God help that I have the strength to perform the last and hardest. We only have one goal left: loyalty to the Führer even in death. Harald, my dear son — I want to give you what I learned in life: be loyal! Loyal to yourself, loyal to the people and loyal to your country ... Be proud of us and try to keep us in dear memory ..."

Harald Quandt survived the war and went on to become a wealthy industrialist like his father. He is seen in the rear of this photo taken with Joseph, Magda and their six children. What an absolute waste.

Chapter Twenty-Three Continued: At a Crossroads

* Magda's mother would later marry a Jewish man, Richard Friedländer, whom she would eventually divorce. He died in the Buchenwald concentration camp.