Chapter Seventeen Continued: Is This Fascist? 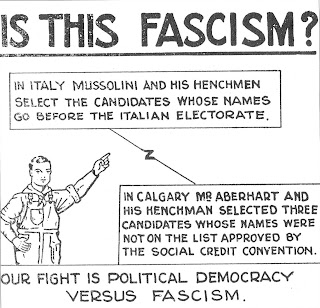 Throughout the campaign, Aberhart was becoming increasingly paranoid, confrontational and authoritarian.

The mainstream newspapers, especially the Calgary Herald, continued to demand that he explain the economic principles of Social Credit, something he had yet to do, and also questioned his view of democratic principles.

Instead of allowing the people to select their candidates, Aberhart sent out a call for "100 good men". He also told the local offices to bring forward the names of several possible candidates, and then he would personally select from the group.

Understandably this brought about the accusation of fascism and many began to refer to Aberhart as a dictator. The references to Mussolini must have really got under his skin, because at one point he thought he might be the Antichrist. A Mr. Humble wrote in the Herald:

First, let me say, Major Douglas is a democrat, and Mr. Aberhart is a dictator. Two weeks ago I charged that the Aberhart movement savored of Fascism. It is now a matter of record that Mr. Aberhart has dictated the terms on which he would undertake the leadership of the new political party and no dictator of the modern world has been more exacting in his demands. Those of you who have been reading the daily press, but did not understand the nature of this organization, were no doubt shocked when you read that the mailed fist of dictatorship was to control the affairs of the party even to the point of naming the candidates for the various con­stituencies in the Province of Alberta. No doubt the sponsor of this move­ment is well read-up on Mussolini and his methods.

The leader of this new so-called social credit party of Alberta has been quite outspoken regarding the old political parties and their wire-pulling tactics, but no political party leader in Canada has attempted to pull the strings to the extent that every member of the party sitting in the parlia­ment would be the personal choice of the leader and a mere rubber stamp man.... Surely no one is going to be fooled by the crude attempt to cover up this procedure by what is to be called "an advisory council" of three members, because even the advisors are to be chosen by the dictator himself. There is not an atom of democracy left in the whole proceedings and Canada has now one who is making a definite bid for dictatorial powers. (1)

And as he promised $25.00 dividends to all Albertans he was very clear about who would qualify:

Dividends would be given for loyalty to the State; if a person refused to work, or refused to join the Social Credit movement, he would not receive dividends. If he abused his privileges under the new economic system, the Credit House inspector could withdraw his dividends and put him on an "Indian List." The latter expression was not defined, but Aberhart may have had in mind the reservations or concentration camps that Bellamy* had described for non-sympathizers. (2)

By now he had almost complete control of the press. From his Social Credit Chronicles to his radio broadcasts, which were uncensored, since he had loaned the radio station a great deal of money (with an 8% interest charge I might add). And if any other newspaper was too hard on him he'd simply tell his listeners from his radio pulpit to boycott them and they would.

And he was not above the use of thuggery:

Feelings ran very high. Some of Aberhart's supporters believed that opposition groups were trying to keep them in poverty. Opposi­tion candidates claimed that when they held their political rallies, their meetings were sometimes broken up by Social Crediters - who banged fenceposts on the walls of the buildings, or stopped their cars outside the halls and blew their car horns until the speakers were forced to quit. They also claimed that Social Crediters slashed their car tires and put sand and sugar in their gas tanks.'

Aberhart did little to discourage the actions of his supporters. When O.L. Mcpherson, the minister of Public Works who had been involved in the spec­tacular divorce suit, attempted to question Aberhart at a political rally, Aberhart appealed to his supporters and said, "Are you going to let this man cross-examine me?" The crowd responded by shouting down Mcpherson's questions. (2)

* Much of Aberhart's 'Yellow Pamphlet' describing the principles of Social Credit, came from the popular book: Looking Backward: 2000-1887, a Utopian novel by Edward Bellamy. It influenced a large number of intellectuals, and appears by title in many of the major Marxist writings of the day. It is one of the few books ever published that created almost immediately on its appearance a political mass movement. The novel also inspired several Utopian communities.