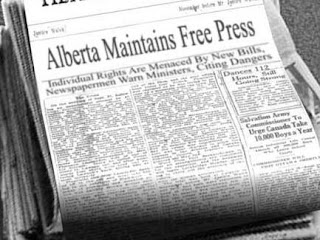 History has been kind to William Aberhart. Too kind I think.

Most historians will gloss over his tenure as Alberta Premier, excusing a lot because of his religious beliefs. I think it may be in part, due to the fact that Aberhart's lieutenant, Ernest Manning took over the job. And then his son, Preston Manning led the Reform branch of the movement, while Preston's lieutenant Stephen Harper is now running the country.

However, there are many hints that suggest that William Aberhart was indeed a dangerous man. An ignorant man, but ignorance is no excuse. What's compelling is that the Pulitzer Prize committee presented an award to the Edmonton Journal in 1938, for breaking through the silence, and cited 95 other Canadian papers for keeping up the fight when Aberhart tried to silence the press with his Accurate News and Information Act.

But if that doesn't convince you, this next story should.

After learning that the draconian acts the Aberhart government was hoping to pass, had all been overturned by the Supreme court, the Socreds were livid. Determined to fight back, they decided to create their own media blitz in the form of tax payer funded pamphlets, that would be delivered across the province.

Designed and printed by the government whip, Joe Unwin and one of the men Major Douglas had sent to assist the party, George Frederick Powell; these pamphlets read like a call to arms against nine men, deemed to be enemies of the social credit system. The front read:

My child, you should NEVER say hard or unkind things about Bankers' Toadies. God made snakes, slugs, snails and other creepy-crawly, treacherous, and
poisonous things. NEVER, therefore, abuse them—just exterminate them! And to prevent all evasion demand the RESULT you want—$25.00 a month and a lower cost to live. (1)

And on the back there was listed nine men identified as "Toadies". Then underneath the list of names were the words "Exterminate Them!"

One of the men targeted for "extermination" was the Conservative leader David Duggan, who rose in the Assembly to draw attention to the pamphlet that was already being distributed outside. The police ended up raiding the Social Credit Board office, confiscating 4,000 of them, while Unwin and Powell were busy trying to destroy the evidence. They were both arrested.

Another man on the list, who did not take too kindly to the viscous hate mail, was William Antrobus Griesbach, a member of the Canadian Senate, former MP and decorated war hero. He requested that the charge of inciting murder be added, but this was later dropped.

What followed was a sensational trial that resulted in the two men being convicted and forced to serve six months hard labour. However, from the outset, Aberhart, the self-appointed Attorney General, tried to prevent the trail from taking place by removing the crown attorney.

He called it a mockery, over something as simple as innocent government propaganda that was meant to be humorous.

But he certainly set the tone for those to follow, as evidenced by Stephen Harper's constant battles with Canadian institutions. (2)

2. The Canadian Nixon: Stephen Harper's feud with Elections Canada is just the latest front in his war against government institutions, By Dimitry Anastakis and Jeet Heer, UK Guardian, April 24, 2008
Posted by Emily Dee at 5:56 AM