The Strange Case of James Keegstra 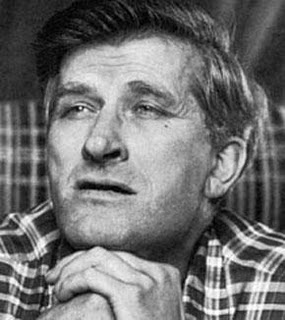 Another graduate of the Calgary Prophetic Bible Institute and long time member of the Social Credit Party, was James Keegstra, the Alberta school teacher who gained notoriety when it was discovered that for 15 years he had been teaching his students that the Holocaust was a hoax.

His sensational trial became the subject of much debate over free speech vs hate crimes, but what was interesting, was not the mainstream contempt for his beliefs, but the people who came to his defense.

Yes there were the usual neo-Nazis and hate mongers, but there were also many religious groups who saw his 'persecution' as a threat to their rights to teach Biblical interpretation.

One of those was a man by the name of Stockwell Burt Day, then assistant pastor at the Bentley [Alberta] Christian Centre and spokesperson for the Alberta Association of Independent Church Schools.

Day was already embroiled in a battle with the Alberta Department of Education and their decision to remove the Bentley Christian School's accreditation because of their teachings, which were deemed be both racist and anti-Semitic. He felt that religious schools should have the right to set their own curriculum. “God's law is clear. Standards of education are not set by government, but by God, the Bible, the home and the school.” (1)

The connection between James Keegstra and Stockwell Day went back further than that, however, in their links to both the Social Credit Party and Keegstra's lawyer; Doug Christie.

Keegstra's parents had joined the Social Credit Party at it's inception in 1935, inspired not only by the promise of monetary reform, but also the Christian fundamentalism.

They listened to Aberhart's radio broadcasts and questioned not a word.

And when the party began distributing anti-Semitic material across the country, they collected every piece, sharing them with their son James.

And when James Keegstra was old enough, they sent him to the Calgary Prophetic Bible Institute, then under the leadership of Ernest Manning, where he would be "taught right."

In 1957, James himself joined the Social Credit Party, and would remain active in the movement throughout his adult life.

He ran for the party, representing Red Deer in the 1972, 1974 and 1984 federal elections. In 1986, he ran unsuccessfully for the party's leadership with the support of white supremacist Don Andrews and Holocaust denier Ernst Zundel*.

In 1972, when Keegstra first ran for the federal Socreds, the party leader was Real Caouette (the image to the left above). During the same campaign and under the same leader, Stockwell Day Sr, also ran for the party, against Tommy Douglas; not expecting to win but only to publicly attack Douglas' Socialist platform. (Tommy Douglas gave us medicare and is the grandfather of Kiefer Sutherland)

Caouette had some pretty extreme views. According to John Gray:

The disdain for outsiders always seemed to fit conveniently with the theory of conspiracy of the old parties. The Jews were another and equally convenient part of the ... demonology and there was a continuing strain of anti-Semitism ... Caouette revealed that his political heroes were Hitler and Mussolini. As late as a few years ago, his bookshelves contained The Protocols of the Elders of Zion.... If non-Creditisites were horrified, the loyalists did not seem to care. (2)

The Day family were also longtime Social Credit members, and according to Stock Jr.'s mother; Gwendolyn (nee: Gilbert) he was exposed to political activism at home.

When Real Caouette fist won the leadership race in 1961, Ernest Manning, then Premier of Alberta, vetoed the nomination, claiming that his province would never accept a francophone Catholic as party leader. Real left to start his own party, but they were reunited in 1972.

Opposing the political climate in Quebec, Stock Sr. packed up his family and headed west in 1967. He would eventually meet up with Doug Christie and joined his Western Canada Concept Party, which was formed to promote western separation. He would contribute regularly to to the Western Separatist, the party's newspaper.

Day Sr. also appeared to have been friendly with Robert Thompson and in fact Thomson's children once stayed with the Day family for a while. According to David Lethbridge, Thompson was a fan of Ronald Gostick** who made his money distributing racist and anti-Semitic material. (3)

I know that a lot of the names that enter this story appear to be guilt by association. Yes Stock Day Sr. was friends with Doug Christie who defended many Neo-Nazis and hate propagandists. That doesn't mean that Christie himself was anti-Semitic, nor does it mean that everyone associated with him is anti-Semitic.

But this speaks to a long history with this party, that was grounded in fanatical Christian extremism. They believed in a Jewish conspiracy and the fact that 'Socialists' and 'Jews' were in cahoots. William Aberhart suggested:

Personally, I have little doubt that in working through Jews, the Jewish financial group has sacrificed its own people on the altar of its greed for power and this group is preeminently responsible for the poisonous anti-Semitism which is rampant in the world today. (4)

And as late as 1943 when Manning was Premier, their report included:

If international finance and socialism are travelling in the same direction is it possible that socialism is promoted by the money power to hasten the completion of their plot for world domination? Not only is it possible, but there is a fund of evidence which leads to the inevitable conclusion that there is a plot, worldwide in scope, deliberately engineered by a small number of ruthless international financiers. (4)

Imperial Oil had brought in Leduc No. 1, a gusher which was obviously going to transform Alberta from a province of poverty to one of plenty. The month after Leduc, Manning acted. The government passed a resolution repudiating "any statements ()r publications which are incompatible with the established British ideals of democratic freedom or which endorse, excuse or incite anti-Semitism or racial or religious intolerance in any form." Within the next year the Alberta Social Credit Board had been dissolved and the leading Douglasites had been purged from the Cabinet. (4)

*Ernst Zundel was also a client of Doug Christie. During the 2000 federal election, where Stockwell Day was running against jean Chretien, the story of Day's involvement with neo-Nazis and his relationship with James Keegstra became public, Ernst Zundel came to his defense saying: "I know the personal toll of standing up for what you believe in, and I was inspired by Stockwell's spirited defense of his school's Accelerated Christian Education curriculum which states that 'Buddhists and Muslims are evil' and 'Jewish leaders were children of their father, the devil."

**Ronald Gostick attended Crescent Heights High School when William Aberhart was principal. He was a long time member of the Social Credit Party and in fact his mother was one of the first Scial Credit MLAs when Aberhart's Party swept the Alberta elections in 1935.

1. Canadian Alliance's Stockwell Day and the charge of anti-Semitism: What is the right trying to cover up? By Guy Leblanc and Keith Jones, November 27, 2000