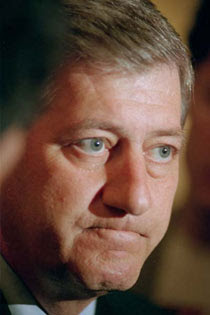 In 2002, a story broke about Ontario Premier Mike Harris and his government's attempt to infiltrate student governments.

They were pouring a lot of money into political campaigns at several Ontario universities.

The provincial Tories are mounting a province wide campaign to fill student governments across Ontario with young conservatives, The Gazette has learned.

Numerous sources indicate the Ontario Progressive Conservative party has been actively recruiting and funding student election bids in order to fill as many high-profile student government positions as possible.

The campaign is run through the Ontario Progressive Conservative Campus Association, which established the "Millennium Leadership Fund" in 2000 to fund conservative candidates on Ontario campuses. The MLF is largely financed by senior PC members and supporters.

In a series of e-mails to OPCCA members in February and March, OPCCA president Adam Daifallah refers to the fund and touts the success of Tory candidates at a number of universities, including Western, Queen's, Waterloo, Wilfrid Laurier and Windsor. (1)

Adam Daifallah went on to become a journalist with the National Post and has co-written a book Rescuing Canada’s Right: Blueprint for a Conservative Revolution, with Tasha Kheiriddin, with a foreword by Mark Steyn.

The book advocates that Canadian conservatives create and fund think tanks and media outlets, and all of the usual strategies of movement conservatism.

"Any student government worth anything with any integrity does not cater to the needs of a political party," said Ontario Undergraduate Student Alliance president and USC VP-education Erin McCloskey.

McCloskey said any student who received funding from the PCs has an unfair advantage. "To have this sort of advantage calls into question the ethics of the person running," she said.

"Student unions are not political positions. They are a place where students work together to defend their common interests," said Enver Villamizar, president of the University of Windsor Students' Alliance, where at least one Tory candidate has been elected. NDP provincial secretary Bruce Cox blasted the campaign, saying it pushes the limits of political action.

"If you have nothing to hide, then show it, he said. "I'm a little uneasy about the unfair advantage that is being given to some students because they have chosen to make a political decision. "If I were a student, I would be wondering: if my elected representatives are receiving funding from the PCs, who are they representing when they speak out?" (1)

The Neoconservative government of Mike Harris did not work well for Ontario. He was eventually forced to resign, amid scandals, and when they left office we were stuck with a six billion dollar deficit, that had been cleverly hidden by Jim Flaherty.

There appeared to be no more mention of their questionable activities, until recently, when they teamed up with the federal Neoconservatives, and are apparently pulling the same stunts across the country.

Thanks to a clever student who taped one their 'seminars', we now know that there is a movement to once again fund and support take-overs of student unions.

A series of documents posted on Wikileaks show that the Ontario Progressive Conservative Campus Association, a Tory-connected student group, held workshops at which participants were taught how to take over various student organizations on Ontario campuses.

"Presenters and participants are caught on tape advocating for the creation of front groups for the Conservative Party to masquerade as non-partisan grassroots organizations, influencing the political discourse on campus, stacking student elections with Party members, and conspiring to defeat non-profit organizations because of political differences, all with the intention of hiding their affiliations to the Party in the process," reads a release put out by the anonymous source who posted the documents.

The OPCCA hosted events on campuses in Ottawa, Toronto, and Waterloo that targeted Public Interest Research Groups in particular. (2)

The suggestions from one conversation:

Ryan O'Connor : Sometimes you can't attach the party's name to something. You just can't. If it's a really controversial issue on campus or something that might show up in the newspaper, you want to be careful. You just have your shell organization and have the Campus Coalition for Liberty and two other Tory front groups which are front organizations, all of those groups might actually qualify for funding too.

Aaron Lee-Wudrick : Don't think that the Party doesn't like that, because they do. They're things that will help the Party, but it looks like it's an organically-grown organization and it just stimulated from the grassroots spontaneously. They love that stuff. (2)

Promoting youth involvement in politics is a good thing, but encouraging them to set up 'front groups' so that they can increase their funding is not only dishonest but illegal. And for a government to suggest this kind of behaviour speaks volumes for their integrity.

And the fact that they are passing these traits onto future politicians, would not instill confidence in voting for conservatives of any stripe.

I'm creating several pages on the kinds of things that are happening at universities today that should give you pause. Once I have them done, I will posting them as a separate chapter, because they not only use questionable ethics, but many of these groups are promoting hate, through something called 'Controlled Controversy'.

There is nothing democratic in what they are doing and it needs to be exposed. Students have to be on their guard, for what they call "guerrilla warfare", because it threatens to alter the way we think and destroy the values we hold dear, like tolerance and even handedness.

Just after the sources, you'll find a list of related postings.

The Conservative Movement and Their Infiltration of Student Unions