The Creation of Stephen Harper's Sandbox 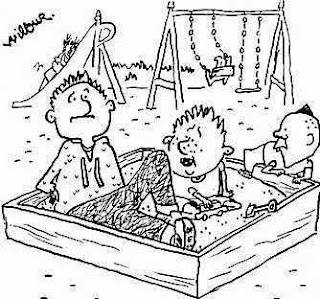 And though there were many warnings about the outcome of a neoconservative takeover, we didn't listen.

The wonderful Dalton Camp, a longtime conservative insider, opposed the notion completely. When he first learned of the attempt to unite the right he was livid, claiming that the conservatism of Stockwell Day "is viewed by most Tories as embedded in the lunatic fringe." (1)

But I think Frances Russel of the Winnipeg Free Press said it best. She felt that this was not going to be a "big tent" party as many were suggesting, but rather a sandbox.

One week into the launch of the latest "great right hope" and the portents are perilous for those who seek a "big tent" party capable of unseating the governing Liberals. So far, the proponents of a united right are making it clear they aren't interested in giving a real option to Canadians. They are only interested in fashioning their own little sandbox where they can play their own narrow ideological games.

Mr. Manning was positively giddy in his article in yesterday's Free Press. He thinks he's finally realized the dream he and his father put into book form back in 1967, the dream to create a party of ideologically pure social and economic conservatism to confront "the collectivist welfare state" that disregards "individual liberties and
responsibilities" and is an affront to "personal salvation."

Moderates within the Progressive Conservative Party must act quickly to ameliorate the harsh, hard-right image of the new party before it solidifies in the public's mind. The Harrises, the Mannings, the Longs -- and the Stephen Harpers -- are not living in political reality. (2)

And she was right, because the only way that Harper has been able to sell neoconservatism to Canada has been to operate in the shadows. Or as his former right-hand man Tom Flanagan once suggested, "fooling Canadians into thinking you're moving to the left when you're not". (3)

Senator Lowell Murray wrote a piece for the Globe and Mail urging Peter MacKay to reconsider.

Stephen Harper called last week for an "electoral coalition" between the Progressive Conservative and Canadian Alliance parties. If our party's leader, Peter MacKay, goes down this road -- and he seems tempted to explore it -- he will waste precious time and political capital. And he will find it's a dead end.

... The fact is that the two parties are fundamentally different. That they are incompatible would soon become clear to Tory candidates trying to defend Alliance policies, and vice versa, in the unstable electoral cohabitation proposed by Mr. Harper and others. Reform conservatism, which is what the Alliance practises, relies on people's fear of moral and economic decline combined with nostalgia for a Canada that no longer exists. It spoils all the good arguments for the market economy by making a religion of it, pretending there are market criteria and market solutions to all our social and political problems. (4)

And even Norman Spector called it the 'Kiss of Death':

Stephen Harper wants to make "common cause" with newly elected Tory leader Peter MacKay in order to throw the Liberal rascals out of office. The Alliance leader says voters expect the two parties to present a single slate of candidates in the next election.

That's eyewash: Most Canadians -- including out here in British Columbia, where the Alliance traditionally elects the plurality of its MPs -- expect Paul Martin to be their next prime minister. They'd be appalled if Tory/Alliance backroom boys and girls came together to carve up the country for political gain. In truth, the proposal is largely tactical, a cleverly designed kiss of death for the Tories. (5)

What we now have is a sandbox, where Stephen Harper and his schoolyard bullies play their ideological little games, and for anyone who disapproves, they can expect to have sand thrown in their face or get a wedgie from hell.

It took Marci McDonald's book, the Armageddon factor (6), for us to realize what has happened to our country. The American Religious Right has accomplished in four years, what it took them thirty years to do their own country. But they couldn't have done it without willing accomplices, a sleeping electorate and the complete lack of an independent media.

And I don't mean that they have turned us into a 'Christian' nation, though a theocracy is definitely on the horizon.

We've been neo-conned, and I suspect we're about to find out just how painful that really is, as we are now on the verge of losing everything that once identified our country. And unless we can convince the parties on the left to unite for the common good, there may be no turning back.

"When I get through with Canada, you won't recognize it". Stephen Harper

That may be the only time he's ever told the truth, because I barely recognize it now.

4. Don't do it, Peter: There is no good reason for Tories to climb into bed with the Alliance
by Senator Lowell Murray, Globe and Mail, June 23, 2003

5. An Alliance kiss of death: The Tories should call Stephen Harper's bluff by proposing a common platform for the next election, by Norman Spector, Globe and Mail, June 25, 2003