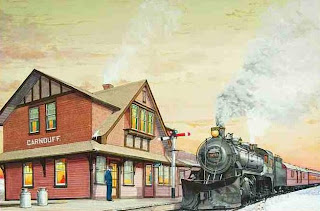 The small community of Carnduff Saskatchewan, located 32 km west of the Manitoba border, and 20 km north of International boundary, was created as a train stop when the CPR railway first laid down tracks. Boasting the first post office in the region, the town was named after it's first postmaster, John Carnduff. In fact the CPR station was located on Carnduff's original homestead.

Though postmasters at that time were paid a mere $2.00 per annum, there was a certain prestige that went along with the position, as they were often privy to all the gossip as mail and "news" was sifted through their fingers. (1)

Settlement in Carduff began in the early 1880's and it was a difficult and sometimes dreary life:

Cutting wood, breaking the sod and planting the seeds for their meagre harvests which tided them over the following winter. Blizzards, floods and prairie fires were taken in their stride. Supplies were either freighted or carried in through mud and over frozen roads. Their sod houses were furnished with the barest necessities ...

One of the early settlers, Gavin Middleton, kept a diary and his entry for November 8th, 1882, is is a bit telling of the times: "Started from McArthurs and Welsteads for Sec.18 with two yoke of oxen in the afternoon and one mile from Carnduffs met McArthur. A fine day. Carnduff brothers stable was on fire. Left a ticket on the door to let him know as he was not at home.

Just what you want when your stable's on fire. A ticket on the door. But then there would have been little that Middleton could have done, I suppose. He goes on to say: "In the forenoon shovelling snow out of the porch and in front of the porch. Last night was fearful cold. The bread had been frozen in the bread box for two nights, as hard as a stone. Mrs. M. thinks that she must have got her nose froze a little in bed." (2)

There is kind of a funny story about Carnduff and the train station there. According to historian Brian Avery:

"One little secret of the CPR station in Carnduff has fascinated me for years. There was a trapdoor in the freight shed floor. Below a small space had been dug out and there was a wooden cabinet. My father felt that it had probably been used in the rum-running days when Carnduff was one of the distribution points for alcohol to supply the USA during prohibition. Alcohol may have been stored temporarily below the trap door and boxes could have been piled over the trap door. This is a very distinct possibility considering the amount of alcohol that apparently moved through Carnduff to the USA." (4)

Charles Ernest Manning was born on September 20, 1908, at Carnduff, Saskatchewan. His family belonged to the United Church but were not terribly religious. He was educated at Glen Payne School near Rosetown, Saskatchewan, another small railway stop, named after it's first settlers; James and Anne Rose from Lancashire, England.

According to his son Preston:

One Christmas, he [Ernest] and his brother Bill assembled a three-tube radio set they had ordered through a mail-order catalogue. Listening to the radio my father became acquainted with the religious radio ministry of William Aberhart, a high school principal and Christian layman in Alberta. Aberhart was a pioneer in the use of radio to communicate Christian teaching. His broadcasts were heard across western Canada in the 1920s and 1930s.

As a result of listening to Aberhart, my father decided to leave the farm in 1927 to study at the Calgary Prophetic Bible Institute, Aberhart's training school. He was the school's first graduate and became Aberhart's assistant. (5)

Had he not bought that old tube radio or listened to William Aberhart's broadcasts, the political landscape of Alberta and indeed Canada, may have been different. I guess we'll never know.