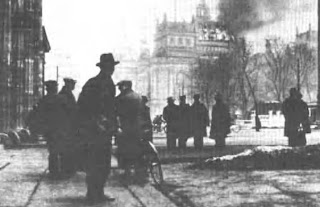 “If you tell a lie big enough and keep repeating it, people will eventually come to believe it. The lie can be maintained only for such time as the State can shield the people from the political, economic and/or military consequences of the lie. It thus becomes vitally important for the State to use all of its powers to repress dissent, for the truth is the mortal enemy of the lie, and thus by extension, the truth is the greatest enemy of the State.” Joseph Goebbels

One element of neoconservatism, as preached by Leo Strauss, is deception, or the "Noble Lie". Joseph Goebbels called it the "Big Lie".

For conspiracy theorists, the Reichstag Fire that occurred on February 27, 1933, can be compared to 9/11 in that it gave way to the suspension of civil liberties in the United States, under The Patriot Act. The Patriot Act, I might add that was drafted by one of the Harper government's friends in the White House; Jim Sensenbrenner.

However, I'm not ready to believe that the Bush administration orchestrated the attack on the World Trade Center, but I don't accept the official story either. Far too many holes.

So was the Reichstag Fire a false flag war? Many historians believe it was.

President Von Hindenberg had named Adolf Hitler Chancellor of Germany weeks before but with limited powers. The fire changed all that. The Nazi Party used it as justification to get rid of the Communists from government, since they blamed them for the inferno, and implement Draconian laws suppressing basic human rights, including dissent.

And they used their propaganda to convince the German people that it was for their own good.

The trial of the five men accused of setting the fire, brought out some very interesting details, not the least of which was that it was probably not a "Communist plot."

Time magazine covered the story and give it a bit of perspective.

"The Reichstag fire is the most shameful crime in all history," declared Prussian Premier Hermann Wilhelm Göring two days before the Supreme Court's verdict was expected. "The prisoners who sit in the dock at Leipzig are far worse than ordinary criminals!" That clinched the death sentences in the minds of simple Storm Troopers. Few of them knew or cared that State Prosecutor Karl Werner, after hurling philippics for weeks at the five Reds, had ended by admitting that the State had no case against three of them. (1)

The others had to be acquitted because there was simply no evidence. They were only arrested in the first place because they were known leaders of the Communist Party who had enjoyed electoral success and were a threat to the Nazi movement.

Just before 9 a. m. one day last week Judge Wilhelm Bünger and his five red-robed colleagues marched into the Supreme Court's dingy chamber to make known their verdict. They gave the Nazi salute. Court attendants and the audience returned it ... Judge Bünger read the Supreme Court's verdict slowly. Much of it was a denunciation of what he called "those senseless legends" ... the legend that Dr. Paul Joseph Goebbels, now Minister of Propaganda & Public Enlightenment, conceived the idea of firing the Reichstag, blaming Communists for the deed and using it as the excuse for Chancellor Hitler's suppression of the Communist, Socialist and other German parties; the legend that Nazi firebugs escaped down the underground passage connecting the Reichstag with the official residence of General Göring, leaving Van der Lubbe to wave his burning shirt in the Reichstag and be arrested.

Turning from these legends. Judge Bünger said: "The Communist Party in Germany had been working for a long time to gain power and awaited only a favorable constellation. The court takes the view that Van der Lubbe [a mentally disturbed young man and the only person executed for the deed] was a Communist and still is a Communist. Decidedly, this Reichstag fire was no act of individual terror but an act of mass terror which was designed to be the overture to a general strike and a revolutionary movement." (1)

And the National Socialist German Worker's Party capitalized on the sentiment:

Finally, to Storm Troopers and to the Nazi rank & file, nothing was more shockingly apparent than that the Supreme Court had proved itself unworthy of Nazidom.

"Downright Judicial Blunder!" screamed a bulletin from the Nazi Party official news bureau. "We demand a fundamental reform of our judicial system. To avert another such decision German Justice must be purged of outworn, alien and liberal conceptions." (1)

Benefits of the Fire and Trial

As mentioned the ones to gain the most from this was the Nazi Party, as it not only substantially increased their powers and limited the Communists, but planted the seed that the "Communists" had gotten away with this act of terror because of "Liberal Judges".

In April 1933, Hitler passed one of the earliest antisemitic laws, purging Jewish and also Socialist judges, lawyers, and other court officers from their professions. Further, the Academy of German Law and Nazi legal theorists, such as Carl Schmitt*, advocated the nazification of German law, cleansing it of "Jewish influence." Judges were enjoined to let "healthy folk sentiment" (gesundes Volksempfinden) guide them in their decisions.

Hitler determined to increase the political reliability of the courts. In 1933 he established special courts throughout Germany to try politically sensitive cases. Dissatisfied with the 'not guilty' verdicts rendered by the Supreme Court (Reichsgericht) in the Reichstag Fire Trial, Hitler ordered the creation of the People's Court (Volksgerichtshof) in Berlin in 1934 to try treason and other important "political cases." Under Roland Freisler, the People's Court became part of the Nazi system of terror, condemning tens of thousands of people as "Volk Vermin" and thousands more to death for "Volk Treason." (2)

The notion of Liberal Judges is a classic neoconservative battle cry. George Bush used the argument to stack the judiciary with 'Conservative' appointees.

In a previous study that was released in August 2004, Carp and his team of researchers predicted that if Bush was re-elected that year, the federal judiciary could take on an even sharper conservative slant. At the time, Bush's judicial appointees delivered liberal decisions 27.9 percent of the time in cases involving civil liberties and rights. For this latest study, researchers analyzed more data, and the figure has dropped to 27.2 percent.

"Our findings are significant because the general consensus is that President Reagan is the most modern conservative president on record, and yet the judges appointed by George W. Bush are even more conservative than the Reagan judges," said Carp, the study's lead investigator. (3)

Stephen Harper has often accused "Liberal Judges" of being too soft on crime and for pursuing a liberal agenda:

Conservative Leader Stephen Harper said Canada’s court system is influenced by Liberal-appointed justices who pursue a social activist agenda, in a statement to reporters yesterday. Asked whether there are activist judges with a social agenda, he said: "Some are and some aren't."

"I am merely pointing out a fact that courts, for the most part, have been appointed by another political party. But courts are supposed to be independent regardless of who appoints them and they are an independent check and balance,” Harper said. Harper said he would want to see particular qualities when choosing judicial appointees. "What we will be looking for is what I call the judicial temperament," he told reporters. "And that is the ability to competently and shrewdly and wisely apply the laws that are passed by the Parliament of Canada."
(4)

Less than a week after Prime Minister Stephen Harper railed against "left-wing ideologues" in Canada's court system, he appointed five judges with ties to the Conservative Party of Canada, Canwest News Service has learned.

In early September, in a partisan speech in Sault Ste. Marie, Ont., Harper said the Liberals, had they won the government last fall, would be putting "left-wing ideologues . . . in the courts, federal institutions, agencies, and the Senate."

But just a few days later, on Sept. 9, Harper and his cabinet signed off on five judicial appointments, one of whom was a Mulroney-era cabinet minister, and four others who contributed thousands of dollars to the Conservatives since 2004. (5)

*Carl Schmitt and Leo Strauss had an intellectual relationship, and it was Schmitt who got Strauss out of Germany before the Holocaust, by securing for him a scholarship to study in Paris.

2. Law and Justice in the Third Reich, The Holocaust Museum