Craig Chandler and the Roots of Change 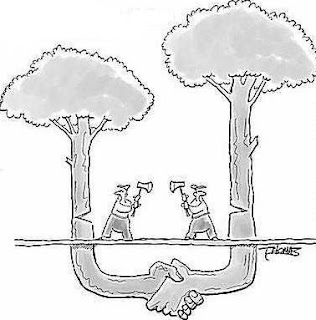 Craig Chandler, a long time Reform-Alliance-Conservative supporter and organizer, used his Progressive Group for Independent Business (PGIB), to help the unite the right, with the motto "Unite the Right to Unite the Country."

PGIB has contributed to the success of Mike Harris, Stockwell Day and Stephen Harper, to name a few. Chandler would hold three 'Roots of Change' conferences, that greatly impacted the outcome of the subsequent merger, fashioned in part on David Frum's Winds of Change.

Tom Walkom in the Toronto Star, wrote of Chandler's initiatives:

When influential conservatives held a conference to unite the right two years ago, Craig Chandler couldn’t even wangle an invitation. “I called to get in but (organizer and journalist) David Frum wouldn’t let me,” the 27-year-old former Reform party candidate recalled this week. “He said they were full. It was a kind of cliquey, elitist sort of thing.”So Chandler got his own back. Yesterday, he kicked off his own two-day, unite-the-right conference in Toronto. And David Frum wasn’t there. Instead, Chandler’s Roots of Change conference is attracting the kinds of blood-and-guts rightists who sparked the Reform party, but who – as Reform attempts to become more respectable – find themselves relegated to the sidelines. (1)

If they were indeed from the fringe, it's interesting to note that their speakers included not only Stockwell Day, but Link Byfield, Mark Montini from the Leadership Institute, Steve Jalsevic from the anti-abortion Campaign Life Coalition* and Michael Coren who now has his own television talk show on Christian TV.

But Craig Chandler contributed something far more important to the cause. He paved the way for a hostile take over of the Progressive Conservative Party of Canada, and they didn't see it coming.

Craig Chandler, founder of the Progressive Group for Independent Business thought that perhaps the best way to bring the Progressive Conservative party on board, was from the inside. So he joined the party and then ran for it's leadership, drawing many of his followers into the PC fold. His bid failed, but at the 2002 PC Convention in Edmonton, Alberta, he manged to have Resolution 9, which sought to ban dual memberships, defeated. This paved the way for an aggressive campaign launched by the PGIB, called the 2Cards.

Quite simply, by following the initial plan of the www.2cards.ca campaign and insure that those that have dual memberships such as the Jim Prentice supporters, many Scott Brison supporters, Peter McKay and Craig Chandler supporters become activated and campaign on the yes side of the merger package. (2)

Chandler encouraged all Alliance Party members to buy PC memberships, so that they would be able to, in effect, vote twice. Without this important initiative, the PCs would never have allowed the merger to take place.

Interestingly, one of the loudest opponents to the uniting of the right was Stephen Harper.

Before Craig Chandler sought the leadership of the Progressive ConservativeParty of Canada with PGIB support, even Stephen Harper was against uniting the two parties. Peter McKay was also very clear about his views on unity with the Canadian Alliance in a very negative way throughout the Progressive Conservative Party of Canada Leadership race ...

Harper had the audience on his side when he dismissed the idea of a merger with the Tories. "And ladies and gentlemen, that's not cooperation, that's surrender, and that's not taking us forward, that's backward. And that's not where we're going to go," said Harper.

But some feel that Harper isn't the right choice, because he's against a merger with the Progressive Conservative Party. Many of Day's old Alberta cabinet buddies aren't backing him but they're also leery of Harper. "I have the greatest respect for Harper," says Alberta's Infrastructure Minister Ty Lund. "I was disappointed, though, to hear that he wasn't interested in working with the PCs." (2)

Stephen Harper had always hated Red Tories and detested the notion of any reference to 'Progressive'. He once said that there would be a showdown between Reform and And the PCs and that Reform would not lose.

However, in exchange for Chandler's support, he took a different approach and when he won the leadership of the Alliance, the extreme right-wing Australian League of Rights was thrilled, since this was an important victory for the movement:

The most notable political developments of the past few weeks were the election of Stephen Harper as the new leader of the Alliance Party, succeeding Stockwell Day; and Mr. Harper's immediate meeting with PC leader Joe Clark, in which he challenged him to stop piddling around and wasting time, and join the Alliance in 'uniting the right,' or else get out of the way as the Alliance moves forward ... Mr. Harper, because of his early background with the Reform movement, his several years' experience in the House of Commons and as leader of the National Citizens' Coalition, should be well equipped for his new role. (4)

Unfortunately, Joe Clark was forced out and the Progressive Conservative party of Canada ceased to exist as of December 7, 2003. The anniversary of the attack on Pearl Harbour, was a fitting date.

Canada no longer has a legitimate conservative party, though there are rumblings that former conservative supporters are thinking of reviving the old party. I hope so. We need a right of centre altrnative to a party so far to the right, they are pulling Canada off the map.

Next: The Creation of Stephen Harper's Sandbox

* "The Campaign Life Coalition, an anti-abortion lobby group backing Mr [Stockwell]. Day, was also censured by party officials for sending out 130,000 letters asking its supporters to donate money so the organization could buy memberships in bulk to help the candidate. Organizers for Dr. Hill and Mr. [Stephen] Harper complained successfully that the actions by Campaign Life violated party rules prohibiting groups from buying memberships."(3)

2. THE BATTLE HAS BEEN WON BUT THE WAR HAS JUST BEGUN!, Buy your PC membership To INSURE a Merger vote Victory! NOVEMBER 30th DEADLINE, PGIB