Justinas Pranaitis and the The Talmud Unmasked 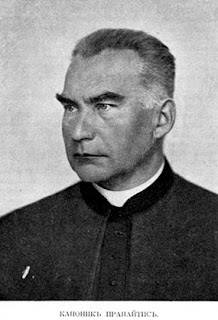 When James Keegstra was asked about his beliefs in regards to Jews, he claimed initially to have come to them after reading the Talmud. But what was later revealed was that they were formed, at least in part, after reading The Talmud Unmasked: The Secret Rabbinical Teachings Concerning Christians, by a former priest, Justinas Pranaitis. (1)

I suspect that there were other books and pamphlets that he digested, but this is where his knowledge of the Jewish scriptures came from.

However, like the Protocols of the Elders of Zion, that formed the basis of both the Nazi Party and Social Credit, and have also inspired modern day neo-Nazis, The Talmud Unmasked was a fraud.

They were written by a priest in Russia at a time when anti-Semitism had unleashed violence and hatred against the Jewish communities.

In 1905 when the fraudulent Protocols were published, they resulted in the Kishinev Pogrom, though that was just a warm up, considering that they were also behind the Holocaust and countless other hate crimes.

When Jews fleeing Kishinev found refuge at the home of a young Leo Strauss, he wondered if something like that could ever happen in Germany. And indeed the same Protocols that created the pogrom would also force Strauss into exile under Adolf Hitler, where he inspired the neoconservative movement at the Chicago School. And his teachings, though badly twisted, are said to be behind the horrendous actions of George W. Bush.

This is why we can't study movements like this enough, and can never forget the case of James Keegstra. Freedom of speech is one thing. But this kind of unfounded hatred, can have devastating results.

The sad thing is that after reading several books and magazine articles, I don't believe that James Keegstra was an evil man. I think he was the product of the times and while he grew up believing in the Jewish conspiracy espoused by Social Credit, then nurtured them with anti-Semitic material he obtained on his own, he came to a horrible conclusion. And it became his mission to retell history.

But unfortunately, he passed on his horrendous views to his students, so who knows how many now harbour that same hatred.

Menahem Mendel Beilis and the Murder of Andrei Yushschinsky

On March 12, 1911, a 13-year-old Ukrainian boy, Andrei Yushchinsky, disappeared on his way to school. Eight days later his mutilated body was discovered in a cave near a local brick factory.

On July 21, 1911, Mendel Beilis was arrested for the murder, and the subsequent trial would lay bare the anti-Semitism that was out of control in Russia.

Later it was determined that Andrey decided to skip school and visit his friend Zhenya Cheberyak. Zhenya's mother, Vera was known in the neighborhood as an associate of criminals and as a "fence" (a seller of stolen property). During preliminary hearings it was revealed that Andrey and Zhenya were seen walking together at a point halfway between the Cheberyak home and the Zaitsev brick factory where Mendel Beilis worked as a clerk. (2)

And the priest Justinas Pranaitis would be at the centre of the false accusations and his book The Talmud Unmasked would join the Protocols as a catalyst for hatred.

Pranaitis was supposed to be a master of theology, but after giving his testimony at the trial it became clear that he had no idea what was contained in the Talmud. His book was based sole on his own anti-Semitism.

Cross-examination of Pranaitis has weakened the evidential value of his expert opinion, exposing lack of knowledge of texts and insufficient knowledge of Jewish literature. Because of his amateurish knowledge and lack of resourcefulness, Pranaitis' expert opinion is of very low value.

And yet you can still buy this book. It is being reprinted and used to 'educate' future generations. Do we need to round them up and burn them? Of course not. But we must discredit them as the rantings of an anti-Semite, not expert opinion of Jewish doctrine.

Because there are a lot of James Keegstras out there and they are not all wearing swastikas or donning white robes.

2. The Anti Semitic Trail that Shook the World, By: by Laurence Krane, The Jewish Magazine, November, 2003