Chapter Twenty-Four Continued: All Quiet on the Western Front 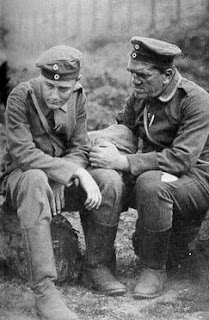 Before Adolf Hitler was named Chancellor of Germany in 1933, there was a concerted effort to protect and glorify Germany's military prowess.

In the aftermath of The Great War, some in the literary world began to contradict the notion of 'heroes' and suggest that the millions of young men who lost their lives did so for an unjust cause.

The first to create controversy, was Bertolt Brecht's poem, Legend of the Dead Soldier. In it he tells the story of a soldier who, having already died a 'hero's death', is exhumed, declared 'fit for duty' and sent back to the front." Brecht's poem was a brutal and carefully aimed attack on militaristic language and the glorification of war. (1)

Brecht would become one of the people on the Nazi hit list, who they planned to destroy once they gained power, and Brecht's books were some of the first to be thrown into the fire when Goebbels ordered all 'anti-German' literature to be burned.

The legend of Langemarck

During the early stages of the first world war, Germany was suffering heavy losses and fearing that the German public would begin to lose favour with the war, a myth was created of a stunning victory at Langemarck, where a large group of students advanced on the enemy "... during a bayonet charge singing ‘Deutschland, Deutschland Uber Alles'. This myth is an exaggeration of what actually happened and its importance." (2)

Actually fighting in the area resulted in the loss of 25,000 German soldiers, one of the highest rates of loss in the war, and it's highly unlikely they were singing anything as they advanced. No doubt Houston Stewart Chamberlain played a role in creating this myth, as chief propagandist for Kaiser Wilhelm II.

But the Weimar government used the battle of Langemarck as "a shining example of patriotic heroism." Eventually 'Lange­marck Day' would be celebrated in Germany every November 11, to counter Armistice Day in the United States, as a symbol of German military strength.

What's interesting is that the notion of these 'days' was inspired by the novels of Edward Bellamy, in particular Looking Backward: 2000-1887. In his futuristic novel he calls it Decoration Day:

It was one of the annual holidays of the nation in the latter third of the nineteenth century, being set apart under the name of Decoration Day, for doing honor to the memory of the soldiers of the North who took part in the war for the preservation of the union of the States. The survivors of the war, escorted by military and civic processions and bands of music, were wont on this occasion to visit the cemeteries and lay wreaths of flowers upon the graves of their dead comrades, the ceremony being a very solemn and touching one. The eldest brother of Edith Bartlett had fallen in the war, and on Decoration Day the family was in the habit of making a visit to Mount Auburn, where he lay. (3)

This novel was published in 1887, and translated into 20 different languages, decades before The Great War.

It's also interesting that William Aberhart was a fan of Bellamy's writings and made several decisions based on his novels. He was inspired by the fact that Bellamy predicted that sermons could be delivered to people's homes over a 'musical telephone', and of course Aberhart was a popular radio preacher: Bible Bill. This is definite proof of the impact of literature on culture.

Mice and Snakes and Hitlerites

Nothing had a greater impact on the Right-Wing in Germany, than the sensational book by Erich Maria Remarque, All Quiet on the Western Front. Released in January of 1929, it became an instant best seller. Within three weeks it had sold 200,000 copies, and by the end of 1929 nearly one million copies were purchased in Germany alone.

Later made into a film, it premiered in Germany in December of 1930, but not everyone was thrilled:

Scuttling beasties and things that went flop in the night helped the brown shirted followers of thundering Adolf Hitler last week win what some correspondents called "their most notable political victory since 107 of them were elected to the Reichstag": official suppression of the made-in-U. S. film All Quiet on the Western Front.

Long before the film reached Germany, German opinion on its worth was neatly divided into two groups, Socialists (pacifists) who not having seen the film were sure that All Quiet was the finest, most graphic war film ever produced; Nationalists and National Socialists (Fascists) who not having seen the film were equally sure that it was a slander on German courage and an insult to Germany's War dead. The Berlin premiere fortnight ago changed few opinions, but Herr Hitler's faithful Nazis took drastic means of expressing their disapproval. Not content with shouting denunciations at the screen, rioting in front of the theatre, they threw stink bombs over the balcony rail, loosed hopfrogs and white mice among the ladies in the orchestra.

Night after night, while protests against the film piled up in the office of the Reich Film Censorship Board, the Nazi menagerie made its appearance in the theatre, amplified last week by the presence of a number of garden snakes that slithered over the feet of the audience, coiled under orchestra chairs. Socialist Prussian cabinet members and officials did their best to express approval of the film by going to the theatre in a body one night, applauding loudly. Said Prussian Prime Minister Dr. Adolf Braun:

Last week Film Censor Dr. Seeger officially banned All Quiet's exhibition in Germany. Despite denials from the Censor's office, correspondents immediately jumped to the conclusion that mice and snakes, and Hitlerite riots were responsible. So did most Germans. Said Heinrich Mann, brother of Nobel Prizeman Thomas Mann: "In countries accustomed to a strong, confident government there cannot be the faintest comprehension of this shameful capitulation by the highest German officials before a horde of half-grown brats." (4) 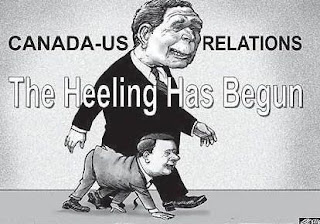 When then Prime Minister Jean Chretien made the decision not to join George Bush in Iraq, neoconservative politicians and their supporters went crazy.

Today, the world is at war. A coalition of countries under the leadership of the U.K. and the U.S. is leading a military intervention to disarm Saddam Hussein. Yet Prime Minister Jean Chretien has left Canada outside this multilateral coalition of nations.

This is a serious mistake. For the first time in history, the Canadian government has not stood beside its key British and American allies in their time of need. The Canadian Alliance -- the official opposition in parliament -- supports the American and British position because we share their concerns, their worries about the future if Iraq is left unattended to, and their fundamental vision of civilization and human values. ... we will not be with the Canadian government.

Modern Canada was forged in large part by war -- not because it was easy but because it was right .... Messrs. Harper and Day are the leader and shadow foreign minister, respectively, of the Canadian Alliance. (5)

In Niagara Falls a group calling themselves Canadians for George Bush held rallies trying to drum up support (6). Organized by Tristan Emmanuel of the religious Right group Christians for the Public-Square, guest speakers included Jim Flaherty, Tim Hudak and Stockwell Day. (7) Emmanuel told the Washington Times that American President George W. Bush had "impressed [him] as a man" and that many Canadians were "looking to him for leadership."

And in Calgary, Alliance Party members also rallied support for the war.

Close to 1,000 Calgarians rallied at the U of C in support of ongoing military action in Iraq on Sun., Mar. 30. Speakers and participants, including veterans and families of armed forces personnel in the war, demanded that Prime Minister Jean Chretien support the Anglosphere nations (the United Kingdom, the U.S. and Australia).

"My wife and I were listening to commentators, not too long before the Iraq event began, and the words that were being spouted were about how everyone in Canada was against the war," said MP for Wild Rose Myron Thompson, whose 29-year-old son is serving with U.S. forces in Kuwait. "We looked at each other with tears in our eyes, wondering 'are we in this alone?' Looking at the audience today, we know now we are not alone."

Over 50 volunteers were on hand at the event entitled I Am Canadian, I Am A Friend of the U.S., organized by Calgary lawyer and U of C Commerce graduate Ezra Levant. Volunteer Brent Waddell was disappointed with the lack of students at the rally, who numbered a couple dozen. "The students should not be against the war in Iraq," he said. "They're for world peace, but before we get there, we must get rid of the world's dictators."

Calgary Southeast MP Jason Kenney echoed his Canadian Alliance party's view that Canada should do more to support its Anglosphere allies." In the last couple of weeks, for the first time I was not proud to be a Canadian... not proud of what Jean Chretien did to undo 130 years of Canadian history [he forgot about Vietnam* obviously] ," he said. "Jean Chretien, has no right to undermine the history, the tradition of our country. We have to let our allies know that even though Ottawa doesn't support them, we as citizens do. (8)

When polls showed that most Canadians supported Mr. Chretien's decision, the Alliance party and their affiliates toned down the rhetoric and bided their time. If they could get control of government they'd change Canada's mind about going to war.

From the moment that the Reform-Conservatives took power in 2006, they began an aggressive campaign to change public opinion when it came to going to war. I'm going to provide much more on this in a later chapter called 'Total War', where they borrowed many ides from Joseph Goebbels, directly or indirectly through Leo Strauss. But for this interlude I am just trying to show a few parallels.

One group that was established was Canadians for Afghanistan, which described itself as a coalition of students and young people. However, the Ottawa Citizen reported that one of the key operatives behind the recently-unveiled group was Josh McJannet.

While others did the talking, as the group introduced itself to parliamentary media, McJannet sat out of sight, a few metres away in a briefing room. He later admitted to being on the group's "steering committee" but declined to answer questions about his role.

Until last September, McJannet was a Conservative staff member in the office of Conservative Whip Jay Hill. Before that he worked for Conservative MP Rahim Jaffer. When he left the hill, he became a lobbyist with Summa Strategies, a firm that counts defence contractors such as the Boeing aerospace giant among its clients. (9)

At one of their rallies on Parliament Hill a lone NDP member carried a sign reading 'Support the troops. Bring them Home'. He was knocked to the ground and his sign broken in two. But Harper was on hand to whip them into a frenzy with his words 'Canada does not start fights but we finish them'. It was pretty clear that 'peace' would not be on their agenda, but convincing Canadians to abandon any such notion would be.

* Jason Kenney had Canada's military history rewritten to remove the fact that Canada harboured draft dodgers during the Vietnam War: Text on how both draft dodgers and resisters of the Vietnam War were ultimately allowed to stay in Canada suddenly vanished from the Citizenship and Immigration site earlier this year. (10)

2. Langemarck: the Battle and the Myth, By: Peter J. Palmer, The Western Front Association, September 13, 2009

5. Canadians Stand With You, By: By STEPHEN HARPER and STOCKWELL DAY, Wall Street Journal, March 29, 2003