Preston Manning and a House Divided 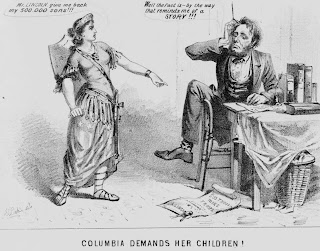 The Reform party and in particular, Stephen Harper, have been accused by their critics of being too American. Or more accurately, too Republican-American.

So it's important to understand the close connection to the American Republican Party that transcends everything else. Preston Manning believed himself to be Abraham Lincoln. I don't mean that he thought of himself as the reincarnation, but he had read his biography and the Lincoln-Douglas debates and believed that the situation in Canada was not unlike the situation in the U.S. that brought on the Civil War.

And he fancied that he was the only person who could "get tough" with Quebec and lead the "new" Canada. And he didn't rule out a 'Civil War' if that's what it took.

Preston Manning is not averse to raising the spectre of violence when he discusses the Quebec issue. He does not raise the possi­bility of violence often, but when he does, he does not elaborate on what he means — another use of deliberate ambiguity. He has, however, planted the seed, evoking the image of violence often enough to establish it in the public mind.

... At the November, 1989 Reform Party Assembly, Manning staked out his tough stance on Quebec, ending his speech with the fol­lowing words, in reference to his terms for accepting Quebec in Canada: "Such terms will be judged satisfactory if they are fair and advantageous to Canada [and] if the new relationship can be established and maintained without violence ... " No one in Canada was anticipating violence over Quebec at this time, and there was little evidence that the Meech Lake impasse was about to dominate the politics of the country.

Preston Man­ning was already positioning himself as the man who would, in his own words, "call Quebec's bluff."

Manning raised the possibility of violence again at a time of maximum national media exposure — the 1991 Assembly in Saskatoon. This time he used his favourite analogy: the conditions which led to the Civil War in the U.S. While clearly establishing that his way, "the Canadian way," of dealing with Quebec, was through negotiations, he once again tossed out the spectre of violence, asking the rhetorical question, "Surely no Canadian wants our secession crisis to come to this [civil war]?" No one but Preston Manning had suggested it might.

Preston Manning's fondness for quoting Abraham Lincoln in reference to Canada's "secession" crisis is well established: in speeches to businessmen in Toronto, at the Americas Society in New York, in his address to the 1991 Assembly, and in many interviews. He is fond not only of the compelling parallels; he is an admirer of Abraham Lincoln and has repeatedly suggested that the Reform Party under his leadership might accomplish what Lincoln did under the Republicans: displace one of the old-line parties.

Some — like the Edmonton Sun's Don Wanagv have suggested that Preston Manning sees himself as the future prime minister of a Canada that does not include Quebec. But ill the speech he made to the 1989 Assembly, there are echoes of Abraham Lincoln. On "behalf of western Canadians," Manning), said, "We do not want nor do we intend to leave this house ourselves. We will, however, insist that it cease to be divided." (1)

And even now when Stephen Harper's political life is threatened, he will bring out the separatist/secessionist card, like a silent dog whistle to his base supporters, who immediately draw battle lines.

This despite the fact that former Harper insider Tom Flanagan has admitted that in 2004, Stephen Harper himself attempted to form a coalition with both the NDP and Bloc, that had the full support of those separatists/secessionists.

Of course, Manning's devotion to Lincoln, was based on revisionist history, that glorifies past leaders. Lincoln's actions did end slavery, or at lest start the process, but his motivation was political, to please the 'abolitionists.' He said the right things to them, but also stated:

Lincoln was also very dictatorial, which wouldn't have been an alien concept to Manning or Harper as their governing style was fashioned, at least in part, by that of William Aberhart and Social Credit. According to Time Magazine in 1935 (3), Aberhart emulated Adolf Hitler in terms of propaganda and heavy handedness.

Lincoln extended the powers of the presidency further than any president before him. Upon learning of the attack on Fort Sumter, Lincoln immediately declared an ‘insurrection’, federalized state militias, blockaded many of the South’s largest ports, and spent $2 million on the Union Army. He did all these things without the consent of Congress. Lincoln also disrupted the democratic process by arresting 31 members of the Maryland State Legislature who were expected to vote in favor of secession from the Union.

Lincoln’s dedication to fighting a war for unity led him to strictly enforce his will against those who disagreed with him. "The unity was weaned by rhetoric and enforced by arms. It was a war proclaimed as a war for liberty, but working people would be attacked by soldiers if they dared to strike, Indians would be massacred in Colorado by the U.S. army, and those daring to criticize Lincoln’s policies would be put in jail without trial-perhaps thirty thousand political prisoners." Lincoln’s iron fist gained him many enemies in both the North and the South. (2)

He also opened mail and shut down newspapers. Dissent was definitely forbidden in Lincoln's United States and if Manning studied Lincoln as he and others have boasted, he surely knew that.

Abraham Lincoln has also been used to justify the marriage of church and state. According to David Brooks:

On Sept. 22, 1862, Abraham Lincoln gathered his cabinet to tell them he was going to issue the Emancipation Proclamation. He said he had made a solemn vow to the Almighty that if God gave him victory at Antietam, Lincoln would issue the decree.Lincoln's colleagues were stunned. They were not used to his basing policy on promises made to the Lord. They asked him to repeat what he'd just said. Lincoln conceded that "this might seem strange," but "God had decided the question in favor of the slaves."

I like to think about this episode when I hear militant secularists argue that faith should be kept out of politics.(4)

Another reason why we should not 'glorify' past leaders. Abraham Lincoln is not the embodiment of everything that is good and holy. Using success in battle as a message from God is not what I want to hear from a political leader.

An interesting choice of term 'militant secularists'. No war should eve be given a holy purpose or be justified as a divine mission.

The Reform movement very much encompasses that, believing that Christianity should affect every aspect of our lives. That's fine for Christians, and I applaud them, if their motives are humane and sincere.

Canadians are not anti-American, though many oppose American Imperialism. We are also, if given a choice, usually supportive of the Democrats, especially since the Republican Party has been hi-jacked by the Religious Right. And I think that's why mainstream Canada never really embraced the reform Party or their morphed Alliance Party.