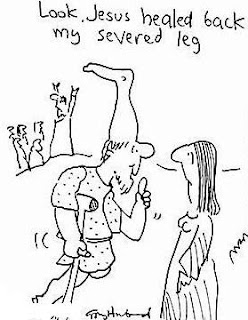 A CULTURE OF DEFIANCE: History of the Reform-Conservative Party of Canada
James Lunney is the Conservative MP who has been leading the charge against Health Canada for meddling in the snake oil business.
Since first joining Stockwell Day and his Alliance Party as health critic, he has launched an ongoing battle as an advocate for alternative medicines, believing that they will cut down on wait times at hospitals.
Homeopathy and herbal medicines are fields where there is a lot of potential, and I fully support research money being given to study their effectiveness.
But that is not what Lunney wants. What he wants is for alternative medicines to be reclassified as food so that they don't require the rigorous testing that drugs would.
And these products are being sold as "miracle cures", at exorbitant prices, to unsuspecting customers, while they could have devastating side effects. There is also concern that they might interfere with other medication being taken, and the dispensers of these "cures" are not properly trained or educated in the health sciences.
But what I've found that most do have in common, is radical religious fundamentalism. Even the fascist sites that David Lethbridge found were selling this stuff, still use 'Jesus', when dispensing hate.
I am so frustrated, because I know this is not what religion is supposed to be. Why aren't more of the mainstream churches or the Evangelical Fellowship not stepping in here? If anything turns people off Christianity faster, it will be these crazies who have taken over our government.
It's been suggested that there needs to be a lot more research into Stockwell Day and his troop, and I couldn't agree more, but it's hard, because everywhere you turn it just gets crazier. And I have to be honest, whether I'm following the links to the neo-Nazi sites or the Christian extremist sites, they are no different. They both leave me feeling ill. The horrible things they say about other human beings, is unbelievable.
Have the hate groups just gone underground and now latched onto the Religious Right?
To catch up, these are the previous posts if you didn't see them and thank you to David Lethbridge who led me down this path:
The Health, Wealth and Stealth of Right-Wing Coalitions
The Health, Wealth and Stealth Continued: Health Coalitions
The Health, Wealth and Stealth Continued: Roots of Change
Health, Wealth and Stealth Continued: Religion vs Knowledge
Health, Wealth and Stealth Continued: James Lunney and Quackery
When Lethbridge suggested in his article Prescription for Fascism (1), looking into this, I had no idea. Absolutely no idea. I had mentioned in Health Coalitions a groups called the Consumer Health Organization of Canada, who hold annual 'Total Health' fests, though their list of guest speakers reads more like Ripley's Believe it or Not. In 2000, Dr. (?) Len Horowitz delivered a lecture on 'Why I should be locked up'. That's not what he called it, but what he should have called it. After going on about how it was the U.S. military who actually started the Aids virus and lauding his friend Dr. Icke. (Icke is the man who believes that a group of extraterrestrial reptiles, who can take on life forms, are plotting to take over the world.)
The good Dr. Horowitz, was at this health convention to flog his new book Healing Codes for the Biological Apocalypse:

"In this next book, what you are going to realize is that I was divinely guided ... [and] was praying to have the Achilles heel of the Illuminati .... Ultimately, I was praying for the Achilles heel because there has got to be a place, a soft spot, that we can knock the oligarchy off and if you've heard me lecture in the past I've always said, I don't know what it is going to be, but in the very last days there will be something happen whereby Satan and his boys will have the carpet pulled from under them and we win in the end.

"Ultimately, why I went on a 40 day fast is because through this new totally exciting, uplifting, new revelations, new codes, that involve creation, destruction, miracles, healing, miraculous healings, including not only personal, but world. I was then so moved because we had our first what is called a healing celebration event, now if you don't have a healing celebrations flyer because first of all I want to acknowledge John and Libby Gardon for putting this whole event together. These are the directors of the Canadian Consumer Health Organization, who put this together every year and if you know them personally they are extremely loving human beings who are only in this because they understand what the illuminati have been doing to suppress true health care and self care, that is preventative medicine, and that they are totally dedicated as David Icke, as myself, as anyone else is on the front lines." (2)

And the good John and Libby Gardon are two of the people Lunney invited to the committee studying his bill on dropping the requirement to have these 'miracle cures' tested before use. The same John and Libby Gardon who invited the late Eustace Mullins, the man who called Jews "furry insects who drink children's blood", to one of their so-called 'Total Health' shindigs.
I'm feeling a little sick, how about you? Not to worry though, because Lunney has the answer: Pig Pills!
James Lunney and Pig Pills
When Health Canada raided offices of Trucorp in 2003, for dispensing illegal drugs, James Lunney went ballistic. Using his Parliamentary office he fired off a press release waging war on Health Canada, suggesting that people now may die if they can't get their hands on the pig pills.
I shouldn't really joke, because there is a chance that the stuff they are selling might have some merit. However, they flog is as a cure for all mental illness, and that's a dangerous thing. I should mention though that recently, the creators of this stuff also made the claim:

"...this product can grow back brain cells, and because the Creator is a lot smarter than scientists, 90% of poor health would disappear ... Will it help everyone? YES IT WILL....”It's a God given answer!” (3)

The trade name for it is EmPowerplus and it has helped hyperactivity and less serious mental disorders, but the problem that Health Canada had was that it had not been properly tested, and they had sent the company warning letters in the past, but they continued to distribute the mixture.
Brad Evenson, the medical advisor for the National Post wrote a lengthy article on the product and it's founders, who came up with the idea after using vitamins and minerals to cure pigs from "ear-and-tail-biting syndrome". Having had experience with mental illness in their families:

The company is now known as Truehope Nutritional Support Ltd. Devout Mormons who wanted to help other families like theirs, the two men vowed to set up so-called Synergy Houses to feed and care for people with bipolar disease, schizophrenia and other mental illness. (4)

Along with the success stories, there are also some tragic ones, and selling a medication as a miracle cure can not only provide false hope, but also create devastating results when people go off their medications as prescribed by medical doctors. Neither man behind the company have any medical training. And none of the people who sell the product from the call centre, are medical professionals.
And along with the treatment, which can run into thousands of dollars, they also offer 'spiritual guidance'. Not for free mind you. One young man spent $ 600.00 in a single month for this support.
It would appear that this is a version of faith healing with a twist, and while there is potential here, they have to go through the normal channels. Do we really want medications on the market without proper trials and labelling?
I'd like to say that James Lunney is the most dangerous member of Harper's caucus. I'd really like to say that, but unfortunately, I can't. And this is not about persecuting Christians or not allowing people to hold personal beliefs, but when they are in government, they have to at least be rational. I can't believe that this is happening, but they were given four years of free rein because nobody wanted to question their religion. And now look at the mess we're in.
Marci McDonald's book The Armageddon Factor*, brought up so many important issues, but I think she could immediately start working on a second edition. Stephen Harper not only allowed this to happen, but encouraged it for power, and now I don't think he knows what to with them. I certainly know what to do with him. Send him to see Dr. Icke.
Footnotes:
*The Armageddon Factor: The Rise of Christian Nationalism in Canada, By: Marci McDonald, Rndom House Canada, 2010, ISBN: 978-0-307-35646-8 3.
Sources:
1. Prescription For Fascism: Alternative Medicine and Right-Wing Politics, By David Lethbridge, April 2001
2. Total Health 2000 - March 2000 - Toronto Convention Center, Healing Codes for the Biological Apocalypse, Guest Speaker Len Horowitz
3. Truehope Conference in Shiloh, Ohio, Founders David Hardy and Anthony Stephan presentation, September 16, 2009.
4. Pigs Will Fly, Every good product needs a good legend. By Brad Evenson, MD Review, February 2004
Posted by Emily Dee at 5:00 PM