From Tommy Douglas to the Exclusive Brethren: What a Journey 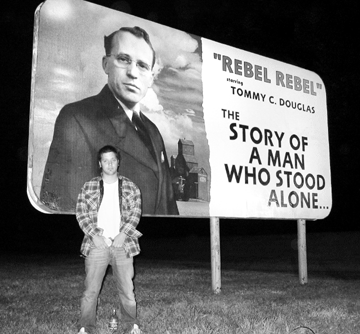 "If instead of giving gems or flowers, we could drop a beautiful thought into the heart of a friend, that would be giving as the angels give." Tommy Douglas

The wonderful Tommy Douglas (1904-1986) once told a story of a day when his father, a burly iron worker, returned home at a time when the local minister was visiting.

"As was his custom, [he] tramped into the kitchen in his dirty pants and boots, the smell of molten metal still clinging to him. "I'm going to have a bottle of beer," he told their guest. "Would you like one?""

Douglas claimed that his mother and the rest of the family were horrified, and he decided on that day that if he was going to be a minister, he would be "one who would accept a glass of beer at a parishioner's home, who would accept his parishioners as he found them and would strive to be one of them." (1)

What inspired Tommy Douglas was not the judgemental man of the cloth, but the pain he saw in the faces of his family, the judged, and he vowed to never inflict that kind of pain. He vowed to be one of them and he was always one of us.

Marci McDonald's book, the Armageddon Factor*, will hopefully encourage debate in this country, about the influence of the American Religious Right movement in all it's ugliness. They are promoting a culture war, that is supposed to pit Christians against non-believers.

But we have to remember that this will not be a war against Christians, but against a political movement that is threatening to tear down Canadian society. And I firmly believe that Tommy Douglas would be on our side.

Because he was the epitome of the Canadian spirit. One of the nicest men to have ever called Canada home. 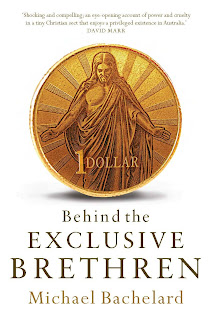 The Exclusive Brethren and the Harper Government

Out of nowhere in 2004, an obscure religious sect burst onto the political stage in Australia. Almost unheard of until then, the Exclusive Brethren was suddenly spending up big in election advertising in support of conservative political parties. But its members were shy to the point of paranoia about who they were, preferring, as they said, to fly under the radar.

Brethren members assiduously lobbied politicians, but did not vote. And they were very close to the-then prime minister John Howard.

What exactly was their interest in politics? Why did their activism suddenly blossom almost simultaneously across the world, from Canada and the United States to Sweden and Australia? And how did a small, fringe group, whose values are utterly detached from those of most Australians, infiltrate the highest office in the land? (2)

In the run-up to the 2006 federal election campaign, and the debate over Bill C-38, referred to as the same-sex marriage act; international fundamentalist groups took a keen interest in the Canadian political scene. Fearing what it meant if the gay and lesbian communities were given equal rights in Canada, they threw millions of dollars behind a variety of movements, all to interfere with our political process. And the man who was running to represent them, Stephen Harper, promised to embrace that interference, rather than protect our sovereignty.

To the American Religious Right there was a concern that our "loose morals" would head south, but why such a keen interest from the Exclusive Brethren? A cult from the United Kingdom? They have now set up offices in Calgary and apparently are even establishing schools here. Do they also believe that Canada will be hosting the "end times", and want a front row seat?

Although they are throwing money into all movement conservative governments, and attacking liberal ones. Their political demands are a seamless mix of business breaks and hard-line Christian morality. Under Hales, the Exclusive Brethren have become a new player in the right-wing politics of the world. And they have lots and lots and lots of money. (3) (my emphasis)

Australia - They poured a lot of money into John Howard's campaign and seem to have had ready access to the PM, much to the dismay of other church groups, committed to social justice. (4) They also made things difficult for the opposition.

A feisty night of heckling in the 2004 Australian elections was the first - but neglected - clue that the sect had plunged into politics. Greens candidate and intelligence whistleblower Andrew Wilkie was at the Gladesville RSL campaigning when a dull night turned nasty. "They had such a threatening presence about them," Wilkie recalled. "They weren't violent but they were very aggressive."

Voices from the back taunted the candidate about his own marriage and about party leader Bob Brown's homosexuality. "I completely enraged them by endorsing Bob and his sexuality. It got them really wound up." All in all, it was an ugly experience. "I'm pretty streetwise," said Wilkie. "But I was rattled." (3)

A fortnight after Howard's re-election, a group called the "Thanksgiving 2004 Committee" registered with the US Internal Revenue Service and placed ads in Florida newspapers supporting the Senate campaign of Cuban-American Mel Martinez, a passionate campaigner against gay marriage ... On election day, the committee placed a hugely expensive full-page ad supporting Bush in The New York Times under the banner headline: "America Is In Safe Hands."

When the financial returns of the Thanksgiving 2004 Committee were published by the Federal Elections Commission in January last year, they revealed that US 377,262 (almost $517,000) of more than $US600,000 raised by the committee came from a Londoner called Bruce Hazell. Press calls to Hazell established little except that he was Exclusive Brethren. (3)

A political conflagration was soon blazing as the Canadian Parliament debated same-sex marriage. In March last year, households in the electorate of every member supporting the bill received a greeting card raging against the legislation: "The suicidal rush to fundamentally change a 6000-year-old
institution is the canker that will destroy the roots of Canada's 'living tree'."

"What I do not respect is tens of thousands of dollars being spent anonymously with absolutely no way to contact this organisation," said a Canadian Liberal MP, Mark Holland. "My office has been contacted by hundreds of residents who are extremely upset. Maybe this is acceptable to the Opposition but I would like to know who is behind it. We do not know who is behind it. Is there foreign money? Is there a political party behind it?"

His questions were answered by advertising agent Ron Heggie a few days before the Civil Marriage Act was passed last July. Questioned by journalists after placing
a newspaper ad attacking the legislation, Heggie said he and the "Concerned Canadian parents" were Exclusive Brethren. ... (3)

They also took out a full page ad in the Hill Times. (5)

According to Marci McDonald* the Brethren have hired the services of Conservative insider Gerald Chipeur, who has represented the Reform-Alliance-Conservative Party for some time. He was the one who wrote the letter to the Bloc asking for a coalition with Stockwell Day in 2000. (6) Day stated that he knew nothing of the letter but a story in the New York Times published then, revealed otherwise. They also quoted his backer, Conrad Black as lambasting Day for fooling around with separatists. (7)

Chipeur has become the regular counsel for cases challenged on the basis of religious freedom, in the same way that Doug Christie became synonymous with representing the neo-Nazis. There is certainly nothing wrong with that, because everyone has the right to hire a lawyer, and when you can afford it, an expert lawyer. A funny co-incidence is that Chipeur has had a long relationship with Stockwell Day, while Day's father had a long relationship with Doug Christie. It's common knowledge available on Wikipedia.

His father, Stockwell Day, Sr., was long associated with the Social Credit Party of Canada. In the 1972 federal election he was the Social Credit candidate running against New Democratic Party leader Tommy Douglas in the riding of Nanaimo—Cowichan—The Islands. Day, Sr., supported Doug Christie and was a member of the Western Canada Concept.

I don't think Canadians realize how well connected the Harper government is with the Religious Right, not only in America but elsewhere. They are wealthy and they are motivated. Just getting rid of Stephen Harper will not be enough. We have got to vote to get rid of this party, and once they are gone lobby government to put legislation in place that will prevent something like this from happening again.

A good place to start would be to cancel 'non-profit' status the moment a group becomes partisan, and any church that gets involved with a political party, also loses their tax exempt status.

And we have to be diligent. Everyone should have the freedom to practice their religion, but no one should be given the power to legislate it. Tommy Douglas promoted a social gospel that was inclusive of everyone. This movement on the other hand, is inclusive and divisive, and most members are not even Canadian.

I want my country back.

7. Rightist Shocks Canadians By Flirting With Separatists, By James Brooke, New York Times, August 3, 2000
Posted by Emily Dee at 10:49 AM