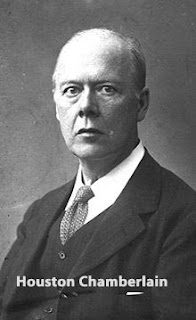 Born into a military family, that was expected to be his career, but he was far too frail, so chose more scholarly pursuits. Too ill to attend school he was provided with tutors, one being the Prussian Herr Otto Kuntze, who taught him German and sparked his interest in German culture and history. So much so that he decided to make that country his home.

First settling in Dresden, he delved into the music and journals of Richard Wagner, and in 1899 wrote his first book The Foundations Of The Nineteenth Century, which helped to create a renewed interest in the pan-Germanic movement.

It was in Dresden that he met Wagner's daughter Eva, and they were married in 1908.

Foundations of the Nineteenth Century was not only based on Richard Wagner's journals, but also the writings of Joseph Arthur Comte de Gobineau, the man who first came up with the notion of an Aryan race; and philosopher Friedrich Nietzsche.*

Chamberlain would become a propagandist for Kaiser Wilhelm during the war and later a member of the Nazi Party, but more importantly his book became the basis for the creation of the Thule Society.

And it was members of the Thule Society who created the enigma of Adolf Hitler, who was passed off as the Antichrist to the occult hierarchy of the society.

Thule member and playwright Dietrich Eckart, directed Hitler's new character, and drew out his seductive power of speech. Thule member Rudolf Hess helped him to write Mein Kampf, and a former university professor of Hess's Karl Ernst Haushofer, is credited with the development of Hitler's expansionist strategies. "While Hess and Hitler were imprisoned after the Munich Putsch in 1923, Haushofer spent six hours visiting the two, bringing along a copy of Friedrich Ratzel's Political Geography and Clausewitz's On War." (1)

The Thule Society would also be responsible for the Nazi flag, the Swastika, 'Sieg Heil', the Nazi salute and their anthem.

Hitler would meet with Chamberlain several times and after one visit, the aging author wrote to the budding dictator:

Most respected and dear Hitler, ... It is hardly surprising that a man like that can give peace to a poor suffering spirit! Especially when he is dedicated to the service of the fatherland. My faith in Germandom has not wavered for a moment, though my hopes were - I confess - at a low ebb. With one stroke you have transformed the state of my soul. That Germany, in the hour of her greatest need, brings forth a Hitler - that is proof of her vitality ... that the magnificent Ludendorff** openly supports you and your movement: What wonderful confirmation! I can now go untroubled to sleep... May God protect you. (2)