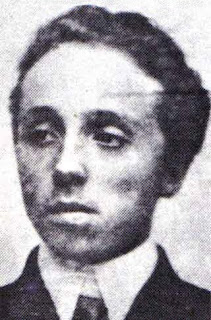 In 1904 a young man named Gustl, stood in line at the Landestheater in Linz, Austria, in hopes of acquiring a standing room only ticket for the Opera. The son of an upholsterer, his father had wanted him to learn the trade but Gustl wanted to be a musician.

While jostling his way through other eager patrons, he met another young man, a year his junior.

"There he stood, this pallid, skinny youth, with the first dark brown showing on his upper lip, in his shabby pepper-and-salt suit, threadbare at the elbows and collar..."

From that day on the two would become inseparable, and his friend would even convince Gustl's father to allow him to pursue a career in music. He did and became rather successful.

The two young men would drift apart but years later would meet up again. By that time his friend too had enjoyed great success. Together they reminisced about the old days and Gustl remembered vividly and wrote later of a evening in 1905 when they had attended a performance of Wagner's Rienzi .

"[He] stood in front of me; and now he gripped both my hands and held them tight. He had never made such a gesture before. I felt from the grasp of his hands how deeply moved he was. His eyes were feverish with excitement .. Never before and never again have I heard [him] speak as he did in that hour, as we stood there alone under the stars, as though we were the only creatures in the world. He now spoke of a mission that he was one day to receive from our people, in order to guide them out of slavery, to the heights of freedom .." (1)

And when Gustl reminded him of that night, the man looked straight ahead and muttered; "It began at that hour ..."

What he meant by those words can only be imagined, but August 'Gustl' Kubizek, would write a book in 1953, about their friendship, and would state: "Even though I, a fundamentally unpolitical individual, had always kept aloof from the political events of the period which ended forever in 1945, nevertheless no power on earth could compel me to deny my friendship with Adolf Hitler."

It Began at That Hour

The March Revolution of 1848, that produced the first German Constitution, still smoldered for months, and did not hit Dresden until May of the following year, when 3000 revolutionaries put the city under siege.

The government called for extra troops from Prussia and on May 4, 1849, one of the revolutionaries climbed to the top of the three-hundred-foot steeple of the Church of the Cross, watching as the Prussian reinforcements marched into Dresden. From his perch he dropped hand made grenades.

Enemy sharpshooters fired at him repeatedly, and when his comrades suggested he come down, he cried; 'Don't worry, I am immortal! As the shots spattered around him he sang out: "To thee, O goddess of love, let my song resound. ... " (2)

But they were badly outnumbered and the man eventually had to leave his post, where he would later flee, forced to live in exile in Paris. His name was Richard Wagner, whose opera Rienzi, which he had written in 1840, had such an impact on Adolf Hitler, and his music would continue to inspire not only that man but the Nazi movement.

Those words "it began at that hour" can have so many meanings. The March Revolution that began in 1848, took the life of William Aberhart's grandfather, and caused his grandmother Sophia Eberhart to flee with her new husband Christopher Heffler, eventually finding refuge in the most unlikeliest place, Tuckersmith, in Upper Canada.

We are all products of history. Or maybe just victims of circumstance. But so many small incidents would eventually result in Canada's first federal neoconservative government.