David Frum and the Winds of Change 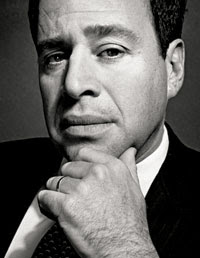 In May of 1996, one of Conrad Black's hand picked right-wing journalists, and close friend, David Frum*; held a Winds of Change conference in Calgary, with the purpose of getting together Jean Charest, then leader of the Progressive Conservative Party, and Preston Manning, then leader of Reform.

The goal, according to Frum, was to discuss the prospects for a merger between the Reform and Progressive Conservative parties. He believed that a vigorous airing of views behind closed doors, would help to develop a common agenda, and create the momentum that was needed to unite the right.

The conference turned out to be both more and less than expected. In terms of bridging the differences between the parties of Preston Manning and Jean Charest, the conference made little headway. The conference did endorse a move that had been underway for some time to field a single Reform-Progressive Conservative candidate in the federal riding of Brant. But the chasm in terms of the egos and pride of the leaders; the different attitudes that the parties have towards populist initiatives; Reform's origins in western alienation, Social Credit, and religious fundamentalism; and the fact that Reform emerged in part as an angry protest against the policies of a Progressive Conservative government made a rapprochement unlikely. The conference also revealed deep divisions between so-called fiscal conservatives who wanted a smaller role for the state and a climate that would foster business growth and social conservatives who wanted greater state involvement in legislating morality whether on abortion, criminal justice, or "family" values. (1)

Ernest Manning had attempted such a merger three decades before, but the neoconservative movement now had the media, controlled by Conrad Black; the Fraser Institute and the National Citizens Coalition.

The Winds of Change conference occurred at a time of both political crisis and rising influence for the right in Canada. On one hand, the Reform and Progressive Conservative parties continue to battle each other for supremacy on the right, splintering the vote. The conference did little if anything to alleviate the problem. On the other hand, the entire agenda of Canadian politics has been influenced by an intellectual climate that is shaped more and more by right-wing journalism. (1)

David Frum would go on to become a speech writer for George W. Bush and it was he who coined the phrase "axis of evil." He is still very heavily involved with Stephen Harper and the Reform-Alliance-Conservative movement, especially when it comes to foreign policy, promoting a nuclear attack on the Muslim world.

Next: Craig Chandler and the Roots of Change

1. The Winds of Right-wing Change in Canadian Journalism, By David Taras (University of Calgary), Canadian Journal of Communication, Vol 21, No 4, 1996
Posted by Emily Dee at 3:48 AM