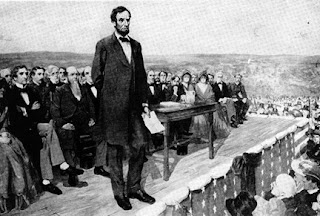 In 1982, at the Social Credit leadership convention, candidate Ken Sweigard " ... arrived dressed as U.S. president Abraham Lincoln, wearing a top hat and carrying a walking stick. His entourage, dressed in 1860s style, held placards reading "Free the Slaves" and chanted "Free the economic slaves", a reference to the social credit theory of monetary reform and opposition to the charging of interest on borrowed money." (1)

He lost to Martin Hattersley, but the following year Hattersley resigned when James Keegstra and two others were reinstated, after he had dismissed them due to their anti-Semitic views. Sweigard called Keegstra "a good Christian gentleman".

In later interviews with Keegstra, when he was being tried for hate crimes, after it was revealed that for 15 years he had been teaching his students that the Holocaust was a hoax, he blamed the Jews for killing Abraham Lincoln, calling John Wilkes Booth, a Jew. He wasn't.

In 1997 when Stephen Harper was speaking at a Council for National Policy conference in Montreal he discussed the current state of Canada's Progressive Conservative Party:

The Progressive Conservative party is very much comparable to the Whigs of the 1850s and 1860s. What is happening to them is very similar to the Whigs. A moderate conservative party, increasingly under stress because of the secession [Bloc] movement, on the one hand, and the reaction to that movement from harder line English Canadians on the other hand.

You may recall that the Whigs, in their dying days, went through a series of metamorphoses. They ended up as what was called the Unionist movement that won some of the border states in your 1860 election.

If you look at the surviving PC support, it's very much concentrated in Atlantic Canada, in the provinces to the east of Quebec. These are very much equivalent to the United States border states. They're weak economically. They have very grim prospects if Quebec separates. These people want a solution at almost any cost. And some of the solutions they propose would be exactly that. (2)

Of course the Whig Party would eventually become the Republican Party in a series of coalitions, and Abraham Lincoln would become their first president. He had been a member of the 'Whig' Party in Maryland.

But I don't use this comparison of the pre-Civil War lightly. Preston Manning, the leader of the Reform party has spent a lot of time reading about pre-Civil War politics. He compares the Reform party himself to the Republican party of that period. He is very well-read on Abraham Lincoln and a keen follower and admirer of Lincoln.

I know Mr. Manning very well. I would say that next to his own father, who is a prominent Western Canadian politician, Abraham Lincoln has probably had more effect on Mr. Manning's political philosophy than any individual politician. (2)

I find that statement to be very compelling. Next to his own father ...

But Stephen Harper was not the only one to have noted Manning's obsession with the Civil War era president:

While still a teenager, he [Manning] read ... Carl Sandburg's multi-volume biography of Abraham Lincoln, who emerged from the backwoods of Illinois to steer his country through the challenge of secession by the southern states and the bloody Civil War that ensued. That fascination with the assassinated American president and the pre-Civil War period has endured, as Manning searches for lessons to be learned and applied to the ongoing threat of Quebec secession.

In particular, he is drawn to the 1858 debates between Lincoln and southern states rights proponent Stephen Douglas, when the future of the union and the principles it should be based on were passionately argued. He claims the same has not happened in Canada, in the days leading up to the last Quebec referendum, and particularly during last spring's federal election campaign. "It seems to me our debate on this subject has been so shallow compared with what has been debated in other countries," says Manning.

After years of debating the national unity issue, many Canadians may find that opinion disingenuous - and self-serving. Others perceive more ominous undertones in Manning's historical interests. Michael Fellman, a professor of American history
at Simon Fraser University in Burnaby, B.C., accuses Manning of having a "superficial understanding" of the pre-Civil War period - and its consequences.

"The Lincoln-Douglas debates and the rise of the Republican party heightened tensions and contradictions in the United States," he says, "and led to civil war because they couldn't solve the problems of the nation." George Melnyk, a Prairie historian and lecturer at the University of Calgary, wonders if Manning sees himself as a Canadian equivalent of Lincoln. "Personal mythologies are not light matters," says Melnyk, who has known the Reform leader since the 1970s. "If Preston Manning truly believes that he may one day have to play the role of Abraham Lincoln as the preserver of the unity and integrity of Canada, then the scenario of civil war is not farfetched." (3)

I believe that when Ken Seigard dressed as Abe Lincoln it was a publicity stunt, and I probably wouldn't read more into it, except that I do find on many Christian fundamentalist sites, a certain almost hero worship for Lincoln, which I will get to later.

But back to Stephen Harper:

That certainly explains the close connection between the Reform Party and the Republican Party. Manning saw them as being of the same political stripe with the same history. Even if most of that history was fabricated.

Continue to Preston Manning and a House Divided