Peter Mackay and the Death of the Tory Party in Canada 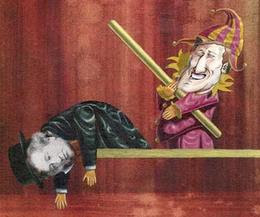 "When good people in any country cease their vigilance and struggle, then evil men prevail." Pearl S. Buck (1892-1973)

In 2003 former Progressive Conservative Member of Parliament, Flora MacDonald, had been in Afghanistan, working with a group of war widows.

When she returned to Canada she was surprised to receive a call from a CBC reporter asking for her views on "the merger". Thinking she was inquiring about some amalgamation of business interests, she explained that since she had just returned to Ottawa, she wasn't up to date on the latest business ventures.

But imagine her shock to learn that the merger in question was that of her Progressive Conservatives with the ulta right-wing Alliance Party. After all, Peter MacKay had clearly indicated during his leadership campaign that this was not a process he would endorse.

MacKay was not my first choice at the June leadership convention - I supported Scott Brison on the first two ballots but after that I gave my vote to MacKay because I took him at his word. He said he would support the strongly endorsed decision of the party at its national convention in Edmonton in the summer of 2002 that there would be 301 Progressive Conservative candidates in the next federal election.

My reaction to the agreement in principle, signed secretly by MacKay and Stephen Harper in October, 2003, was first of all one of incredulity, then anger that the party decisions so strongly expressed in Edmonton and endorsed by MacKay during the leadership campaign could be so easily jettisoned. Further, the fact that he would willingly preside over the demolition of a historic 150-year-old institution that has done so much to build this country leaves me asking how he defines integrity and principle. (1)

How he defines integrity and principle?

The leadership convention that had taken place in May, saw David Orchard, a leadership candidate, throw his support to Peter MacKay with the promise that he would not unite the right. In fact, at the the convention, the members voted overwhelmingly, that no such merger should take place.

So a meeting was held with representatives of the Mackay and Orchard teams, resulting in a written contract, that read:

May 31, 2003 Agreement between Peter MacKay and David Orchard

2) Review of FTA/NAFTA - blue ribbon commission with David Orchard with choice of chair with Peter MacKay's agreement. Rest of members to be jointly agreed upon.

3) Clean up of head office including change of national director in consultation timing within reasonable period in future, pre-election and some of DO's people working at head office.

It was a done deal, or so the party thought. What happened? How was Mackay able to renege on a written contract, to "willingly preside over the demolition of a historic 150-year-old institution that has done so much to build this country"?

Next: Ernest Manning and the National Citizens Coalition

2. "Tory leadership deal, Peter MacKay won David Orchard's support at the Tory leadership convention based on a deal hastily scrawled on a piece of paper", Globe and Mail, June 5, 2003
Posted by Emily Dee at 3:44 PM