Chapter Thirty-Two Continued: The Mark of the Beast 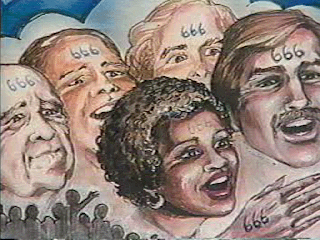 ANTICHRIST: What more could I wish for? It’s only a matter of time now and not long at that. The whole world will soon be at my feet. What fools those Jews were to agree to assist me to this throne of Russia. I do not need their support any longer. Tomorrow I will break my covenant with them. Their religious ceremonies must cease. I will not tolerate such stuff in my realm.

ANTICHRIST: What brings you here to me, sir?

FALSE PROPHET: I come to make you a proposition. You already know something of my origin and my purpose in being in this world. There is a work that we can best accomplish by working together.

ANTICHRIST: You interest me. What is your proposition?

FALSE PROPHET: It is this. You well know, my Lord, that the day is fast coming when you will be the supreme ruler of this world. Already you have more power than all the governments of Europe and Asia, together. Your word is law. The kings of this earth tremble at your smallest command. Their thrones will soon be yours. But there is one thing that will always hinder your progress as long as it is allowed to exist. That thing is true religion. As long as people retain even the thought of God, their allegiance will be divided between yourself and Him.

ANTICHRIST: I realize that well enough. That is why I propose to banish religion from the earth. I will not allow the name of God to be mentioned under penalty of death. Just give me a little longer. Tomorrow I intend to break my covenant with those Jews and cancel all their religious rights. Once they are exterminated, what religion there will be left in this world will not be difficult to eradicate.

FALSE PROPHET: My Lord, I highly commend your actions, but why not go a step further still? I suggest not only the annihilation of all worship of God but propose to introduce a new form of worship in which you yourself will take the place of God. In that way man’s natural tendency to worship will be gratified and you will be exalted to a position never before held by a man. I have full control over the apostate religions that at present are worshipping our adviser, Diabolos, and a multitude of his demons. I propose turning all apostate religions into one great channel with yourself as the object of worship.

ANTICHRIST: I like well your proposition. We have all the power of the Devil behind us. We can accomplish our ends without difficulty. Militarism will be the order of the day. Deception shall be our weapon where force is unwise, until we get complete control. Let us proceed with care and the whole world will soon be out our feet.

FALSE PROPHET: One thing we have to consider. Some will refuse to worship you. How can we prevent them from evading us?

ANTICHRIST: That will not be hard. *We will soon have full control of the trade and commerce of the world. We will then make the people swear their allegiance to us and bow down and worship before they will be allowed to buy or sell. When they do, we will brand them like cattle, and no one will be allowed to buy or sell unless they have our mark upon them. We will do away with any who refuse.

FALSE PROPHET: Then our last difficulty is solved. The future is open before us my Lord. Woe to him who opposes or dares to cross our path. Now let us launch our great campaign. You complete your world conquest and cease not until the last king has thrown his crown at your feet. I will see that apostate religion keeps pace with your advancements. Meanwhile we will complete all details of our plan and when we meet again it will be to make dreams come true.

Image, False Prophet, Antichrist, Guards and so forth. Long blast on cornet.

FALSE PROPHET: Here ye all this proclamation and decree hereby issued by the command of the Antichrist, the supreme ruler of this world. (Reads decree concerning worship of image, receiving of mark, etc.) At the sounding of the trumpet this decree shall immediately become law, and woe to any who refuses to worship the image of the greatest man this world has ever seen. (1)

The above is an excerpt from a play written by Ernest Manning and William Aberhart in 1931. Using students from the Calgary Prophetic Bible Institute, they performed it at high schools and church halls, and it is said, scared people half to death.

Based on the popular novel by Sydney Watson: Mark of the Beast*, Manning and Aberhart clearly wanted to scare their audiences into accepting Christ, then and there. In one scene a young girl claims that she goes to church and reads the Bible, but was told that wasn't good enough, and the Antichrist did away with her entire family.

This play was not written for entertainment but was a form of fear mongering.

There has been a lot of debate over the religious fanaticism promoted by Aberhart and Manning, and what kind of influence it had on future generations in Western Canada. James Keegstra, the Alberta school teacher who for 15 years taught his students that the Holocaust was a Hoax, attended the Calgary Prophetic Bible Institute. His parents were also devout Social creditors and anti-Semites.

Ron Gostick, whose mother was a Social Credit MLA, was one of the largest distributors of hate literature in North America.

Stockwell Day's religious fanaticism, may have also come from his parents, who were not only members of Social Credit, but his father once ran for the party against Tommy Douglas.

The Bible broadcasts of Aberhart and Manning played for decades, to a wide audience. To suggest that they didn't have an impact would be naive. And the brand of Christianity they taught often bordered on the occult.

Ernest was there during the darkest days of Social Credit, when his government was being compared with Nazis and called fascists. The social credit board distributed antisemitic material and as a result, they were often taken to task by the Jewish community.

Manning would later "purge" the party of the anti-Semites, but it was mainly for political expediency, since they were starting to demand that he adhere to social credit principles. And in fact, while his caucus was stripped down, anti-Semitism would continue to define this party for many years. (2)

In a revisionist history Ernest Manning has been made to look like Ward Cleaver, but there was definitely a dark side to him.

*Tim LaHaye and Jerry B. Jenkins, authors of the popular Left behind Series, that is now the blueprint for the Religious Right and Christians United For Israel; also claim to have been influenced by Sydney Watson's apocalyptic novels.

2. Beyond the purge: Reviewing the social credit movement's legacy of intolerance, By Janine Stingel, Canadian Ethnic Studies Journal, Summer, 1999
Posted by Emily Dee at 11:38 AM