Chapter Twenty-Eight: Leo Strauss, The Best of Times, the Worst of Times 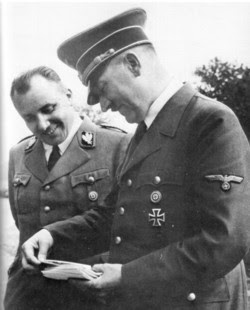 Forty-four years old was Handsome Adolf Hitler last week and Germany went wild. Not even the Kaiser or Old Paul von Hindenburg ever had such a birthday. Despite his expressed desire to spend the day quietly in his little Alpine cottage near Berchtesgaden he could not avoid the attentions of his delirious followers. They roused him with flowers, they roused him with telegrams, bottles of wine, boxes of cigars (Chancellor Hitler does not smoke, drinks nothing stronger than beer), Easter eggs, Westphalian hams, lumps of sugar for his police dogs. Back in the Chancellery in Berlin the presents came in by the carload. Sofa cushions were the most popular, there were over 1,000 of them; also clocks, books, pictures, rugs, clothes, a birthday cake weighing 170 lb., dogs, canaries, parrots, and a saddle horse (Chancellor Hitler does not ride). Most appealing was a box of pretzel mice from the children of Hameln, labeled YOU ARE NOW OUR PIED PIPER.

In the city twelve Nazi standard bearers tramped with flags flying to the high altar of Berlin's Protestant Cathedral while the choir sang, "Thus Far God Has Guided Us." Nazi peddlers did a land-office business selling wooly imitation edelweiss, Hitler's favorite posy, for ten pfennigs each, the proceeds to go to charity so that, in the Chancellor's own words, "No one should go hungry on this day." Restaurants, beer gardens and Nazi headquarters who had promised to distribute free food ran out of supplies early, but it was a wonderful feast while it lasted. Soldiers, police, storm troopers and Stahlhelm members paraded all day long. Proudly officials at the Chancellery displayed a birthday message from the Reichspräsident, signed "In loyal comradeship, believe me, your devoted VON HINDENBURG." (1)

And on the day that the article appeared in Time magazine, though probably inspired by the actual event and not the reporting of it; two men who played an important role in the philosophies of Leo Strauss, would join the National Socialist German Worker's Party of Adolf Hitler: Martin Heidegger and Carl Schmitt.

Strauss, however, was already living in Paris, after Schmitt, the infamous Nazi jurist, and Christian Catholic, arranged for Strauss, the Jew, to obtain a Rockefeller scholarship to study there. No doubt, Strauss would have preferred to join in the festivities in his homeland, and would later tell a girlfriend, Hannah Arendt, that "he wanted to join a party which would not have him because he was a Jew." (2) 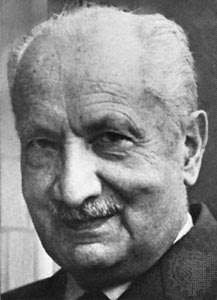 Martin Heidegger and a Sense of Being

Martin Heidegger (1889-1976) was a professor at Marburg University, and Leo Strauss attended several of his classes. Other students included Hannah Arendt as mentioned above, and Strauss's good friend Jacob Klein or "Jasha", a renowned interpreter of Plato.

Strauss would often eagerly discuss "Heidegger's innovative interpretive prowess", (3) though he wasn't part of his circle.

Heidegger's philosophy dealt with the concept of "being", and he worried that technology could become "dehumanizing". I know it was much more complicated than that, but he seemed to have opposed modernism and liberalism, as did Leo Strauss.

I try to avoid judging individuals simply because they joined the Nazi Party, as Strauss would warn viewing them "under the shadow of Hitler." However, Heidegger did remain with the party through to the end and according to a book written by Chilean Scholar Victor Farias, did not change his views as others have claimed.

Although scholars have long known about Heidegger's early flirtation with National Socialism, he was generally thought to have become disenchanted with Hitler well before the outbreak of World War II. With new documentation, Farias charges that Heidegger, who died in 1976, was a lifelong anti-Semite and a devoted, dues-paying party member until the end of the war. Farias also notes that Heidegger went out of his way to praise Hitler to his colleagues and failed even after the war to criticize Nazi atrocities and genocide. (4)

What's important is the role he played in Strauss's life and his influence on neoconservative theories. I do often wonder though how he justified it in his own mind.

Another philosopher who challenged Strauss, and whom he would often discuss Heidegger's theories, was Franz Rosenzweig (1887-1929), who was a Jewish theologian. He died of ALS before Hitler came to power. But up until the day he died, he continued his work, dictating one letter at a time to his wife, through the use of eye blinks or by touching the letter on an old typewriter. I love that story.

I'm going to continue with the relationship between Leo Strauss and Carl Schmitt, but I wanted to share the opening story, that reveals the sentiment at the time. Adolf Hitler had become a god to the German people.

We have the luxury of knowing his evil history, but to the German people then, he was their saviour. The Weimar republic that replaced the Royal house of Hohenzollern, did not work. The German people had suffered more than a decade of civil unrest and I think they missed having a central figure they could count on to lead them. And the propaganda genius, Joseph Goebbels gave them the image of a strong leader in Adolf Hitler.

No one can really say with any certainty that they wouldn't have fallen prey to the hysteria. Unless of course you were Jewish. But in 1933 few could have predicted the horrific outcome. When the U.S. began sounding the alarm, based on stories of those who managed to escape, and nations began to boycott German goods, Hitler countered:

"America, which of all other lands has taken it upon itself to set up a movement against our methods of self-defense, has the least excuse for such action. The American people were the first to draw practical and political conclusions from differences among races and from the different value of different races.

"Through its immigration laws it has prevented the entry of those races which seemed unwelcome to the American people. And America today is by no means ready to open its doors to so-called refugee Jews from Germany, whereby we must emphasize that in reality not a hair of any Jewish head has been touched."

So last week spoke Adolf Hitler before a meeting of the German Medical Federation. Under his hand Germany proceeded openly to reduce her Jewish inhabitants to the social and political position occupied by Negroes in the southern U. S. and Orientals in the West. (5)

So I will continue with the story of Carl and Leo without "the shadow of Hitler".