John Carpay is the co-founder of the Canadian Constitution Foundation, referred to by Equipping Christians for the Public Square Centre (ECP) as "Canada’s leading organization fighting the enemies of freedom in Canada’s courts." Up until recently, ECP's director was Timothy Bloedow, legislative assistant to Maurice Vellicott.

Carpay has been a long time Stockwell Day supporter, and is part of his Reconstructionism team. Though he once ran as a Reform Party candidate but lost, his partner and co-founder of CCF, John Weston, is now one of Harper's MPs, and like Harper, these men and CCF are committed to demolishing Canada's Health Care system. To do this they take on constitutional challenges, including that of Shona Holmes. (1)

The Mysterious Case of Shona Holmes

Americans for Prosperity (AFP) is one of the groups behind the organizing of the infamous and band of the ignorant, Tea Party rallies in the United States. Funded primarily through the Koch foundation, a conglomerate with holdings in oil and gas, chemicals, minerals, ranching, and securities, they have also launched campaigns against climate change, regulating the tobacco industry and the size of government.

Their Director is Art Pope, an ex-legislator who has been dubbed "The Knight of the Right". Pope has created several "organizations to sway public opinion, monitor the legislature, develop grass-roots political efforts and bring court challenges" and he has spent "millions of dollars on a network whose purpose is to move North Carolina to the political right." His goal was to purge the North Carolina state House of Representatives of Republican moderates. (2)

They're experts at fake grassroots campaigns that promote corporate interests. Americans for Prosperity is the group that ginned up anti-stimulus rallies earlier this year. They also organized what they called the "Hot Air Tour" to campaign against the whole idea of global warming. They were the ones who sent Joe the Plumber around the country to rail against the Employee Free Choice Act, which is pro-labor legislation.

One other thing about Americans for Prosperity, their most visible spokesman, is a man named Tim Phillips. He is the President of the organization and we've asked him to come on the show to talk with us about the group. Tim Phillips got his start in fake grass roots with a firm called Century Strategies, run by Ralph Reed. Century Strategies is famous for having duped Christian groups into lobbying for energy deregulation. You know, like the Bible said.They were doing that at the behest of Century Strategies' client, Enron. Tim Phillips and Ralph Reed were later made even more famous in the Jack Abramoff scandal, for duping Christian groups into lobbying against gambling. But only in areas where these guys happened to have competing gambling interests as clients.These guys are the pros. (3)

And of course much of the funding comes from Koch Industries through a network of think tanks and non-profit groups.

John Carpay, who is also involved with the Fraser Institute and Preston Manning's the Manning Centre for Building Democracy, is a regular speaker at an affiliate of Koch, the Atlas Experience, where like Stephen Harper, he preaches to the American conservatives on the evils of the Canadian identity.

So who better to call on when they wanted to launch another "fake grassroots campaign", than their buddy John Carpay and his Canadian Constitution Foundation, and he knew just who would be up for the job. An Ontario woman named Shona Holmes, who claimed that had she not gone to the U.S. for surgery, she would have died. Did I mention that she "claimed" she needed this life surgery? (Holmes is second from right in the photo below, taken with Republican Party brass.) 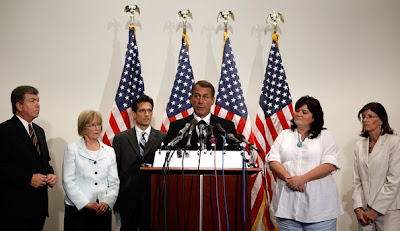 Holmes was featured on a number of ads suggesting that Obama was looking to replicate the Canadian system, and just how damaging that would be. However, columnist David Lazarus of the Los Angeles Times wrote that "a single-payer Canadian style insurance system is not part of any leading reform proposal as the ad suggests". Media Matters for America called the ad "Strong on emotion and weak on facts.

So who is Shona Holmes and is her story true?

"What many Canadians don’t know is that Ms. Holmes has a lawsuit against the Ontario government, which has not been filed, to recoup 100 thousand dollars for her 2005 trips to the Mayo clinics to remove a Rathke’s Cleft cyst. The suit is also a challenge to single tier care and the Canadian health system. She is one of two plaintiffs, the handlers behind it are The Canadian Constitution Federation. After doing the commercial and a talk show circuit in the US Shona Holmes publicist told CBC News, she was now declining interviews." (4)

According to American journalist Ian Welsh, the entire thing was a hoax:

On the Mayo Clinic's website, Shona Holmes is a success story. But it's somewhat different story than all the headlines might have implied. Holmes' "brain tumour" was actually a Rathke's Cleft Cyst on her pituitary gland. To quote an American source, the John Wayne Cancer Center, "Rathke's Cleft Cysts are not true tumors or neoplasms; instead they are benign cysts."There's no doubt Holmes had a problem that needed treatment, and she was given appointments with the appropriate specialists in Ontario. She chose not to wait the few months to see them. But it's a far cry from the life-or-death picture portrayed by Holmes on the TV ads or by McConnell in his attacks. (5)

The following video represents one of Americans for Prosperity Tea Party chats, where they are trying to use fear mongering, even suggesting that Obama would engage in the genocide of senior citizens. But as one person suggests after the video: "It's really too bad there are so many uneducated people. End of life counseling is done all the time and in fact, check your private insurance policy, cuz it's in there. I worked for an attorney and we wrote living wills all the time - and guess what? We never killed anyone."

What this speaks to more than anything is the enormous ties between the Republican Reconstruction team and Canada's Religious Right. John Weston, the MP who helped to found the Canadian Constitution Foundation, also belongs to the Christian Legal Fellowship, that challenge our Constitution, taking on court cases based on religious freedom.

2. "The knight of the right: Ex-legislator Art Pope has quietly built a political network to advance his conservative vision for North Carolina", By Rob Christensen, Raleigh News and Observer, January 29, 2006.