Though the appointment of Major Douglas's two lieutenants, George F. Powell and L.D. Byrne, was supposed to make the government more stable, they instead attempted to make it more radical.

They established the Social Credit Board and demanded that all MLAs sign an oath to back the government unconditionally, something unheard of in a democracy.

They also introduced three pieces of legislation that were so arbitrary that the media were convinced that Aberhart was attempting to run his government like the Gestapo. The political cartoonist, Stewart Cameron published an illustration depicting Aberhart burning down the Reichstag. Time Magazine saw it this way:

The first bill would force Alberta newspapers to give as much as one full page to presentation of the Government's views verbatim at any time upon demand, is entitled An Act Ensuring Publication of Accurate News and Information. The second would arbitrarily increase taxation of Alberta banks $2,000,000 per annum, and the third makes this possible by classifying "banks" as "credit institutions," thus making them liable to measures which under Dominion law could not be applied to them as banks. All three were so extraordinary that the King's Lieutenant-Governor refused to sign and sent the bills to Lord Tweedsmuir, the Governor General who in legal fiction is "the Person of the King in Canada." (1)

The bank act, known as the Credit of Alberta Regulation Act, required every bank and all their employees to be licensed by the provincial government and to be overseen by a Social Credit Board-appointed directorate. The Bank Employees Civil Right Act, prohibited unlicensed banks and their employees from initiating legal proceedings, and amendments to the Judicature Act prohibited court actions alleging that any of Alberta's legislation was unconstitutional. (2)

The Lieutenant-Governor of Alberta, John Campbell Bowen, had to give royal assent before the bills could be put into law:

A painful dilemma was faced last week by the representative of King George VI in the Province of Alberta, Lieut.-Governor J. C. Bowen. He was expected by Premier William ("Bible Bill") Aberhart to sign, as a formality, three bills just passed by the Legislature and designed to save the now economically shaky "Social Credit" regime in Alberta which pious radiorating Mr. Aberhart set up two years ago with promises to pay every citizen a monthly "dividend" of $25 (1)

Bowen asked the opinion of the Attorney-General, John Hugill, who stated that he believed the bills were unconstitutional, infuriating Aberhart and he demanded his resignation. He would then simply name himself Attorney-General, prompting more accusations of trying to run Alberta as a dictatorship. 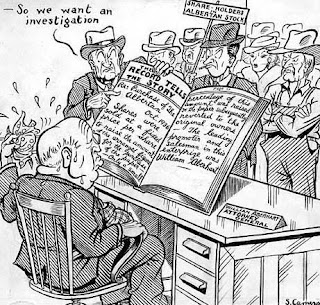 The Accurate News and Information Act

This was the legislation pushed through by the Social Credit Board and William Aberhart, which was meant to silence the media, who were becoming increasingly critical of Aberhart's government.

The act empowered the chair of the Social Credit Board to require a newspaper to reveal the names and addresses of its sources, as well as the names and addresses of any writers, including of unsigned pieces. Non-compliance would result in fines of up to $1,000 per day, and prohibitions on the publishing of the offending newspaper, of stories by offending writers, or of information emanating from offending sources. The act also required newspapers to print, at the instruction of the chair of the Social Credit Board, any statement "which has for its object the correction or amplification of any statement relating to any policy or activity of the Government of the Province." (3)

The act was attacked by opposition politicians as evidence of the government's fascism, and the international press began to refer to Aberhart as "a little Hitler".

Bowen put a stop to the Accurate News and Information Act, referring the matter to the Supreme court. Aberhart retaliated by refusing to pay the traditional share of the Lieutenant-Governor’s expenses.

Meanwhile, the premier's battles with the media continued. On March 25, 1938, he ordered that Don Brown, a reporter for the Edmonton Journal, be jailed "during the pleasure of the assembly" for allegedly misquoting Social Credit backbencher John Lyle Robinson.

He was never actually jailed but the backlash was felt across the country. Eventually the Supreme Court of Canada determined that the Accurate News and Information went against the constitution and ordered it to be discontinued.

For his efforts at protecting free speech, Don Brown and the Edmonton Journal were awarded a bronze plaque from the Pulitzer Prize committee, the first time it honoured a non-American newspaper. And ninety-five other papers, including the Calgary Albertan, Edmonton Bulletin, Calgary Herald, Lethbridge Herald, and Medicine Hat News, were presented with engraved certificates. (4)

Now we have Aberhart's incarnate, Stephen Harper, doing the same thing, suppressing information, and Time Magazine (5) and others are warning Canadians of the severity of such a situation. But who will win a Pulitzer in Canada for putting an end to freedom of the press now?