The Curious Case of Hannah Giles and James O'Keefe

"Everyone knows that for certain breeds of dogs it is customary to cut their tails short when they are a few weeks old. Every time you clip the puppy's tail it hurts. It hurts. You might traumatize the puppy for life. The moral is that if it's your tail that's being clipped, you want it clipped once. But if you get a chance to clip your opponent's tail, clip that puppy as often as you can." (1) Morton Blackwell

Those on the right in Canada are lauding the fact* that Preston Manning has created the Manning Centre for Building Democracy, fashioned after the Leadership Institute of Morton Blackwell. Both also have Campus Leadership training programs, where young conservative radicals are trained in the clipping of tails.

Has your student government been overrun by extreme left-wing students? Is freedom of speech being infringed upon on your campus? Are groups on campus using student money to further a left-wing agenda? Do you want to get organized and fight back?

And one of their former teachers at Blackwell's school, shows how it's done.

James O'Keefe and the destruction of ACORN

James O'Keefe is one of two young people who recently achieved spectacular results exposing ACORN. His revelations crippled one of the left's most powerful organizations. With training and a little financial help from the Leadership Institute, James O'Keefe started in 2004 an independent conservative student newspaper, The Centurion, at Rutgers, a large state university in New Jersey. James fought the liberal administration at Rutgers.

... James went to ten different training schools of the Leadership Institute. The Institute hired him for a year (2006-07) to help conservative students around the country form their own campus publications. He conducted 75 training programs for LI. Among the useful things James learned at LI was: "Don't fire all your ammunition at once."

In September 2009, each day for five days James released new videos exposing ACORN's outrageous practices. The roof caved in on ACORN. Obviously, the impact of his work would have been much less if James had released all those videos at the same time. Now James is a national conservative hero, and I believe he will write his own ticket to a future career doing just what he loves to do. (2) Morton Blackwell

O'Keefe certainly did write his own ticket, but not before destroying an organization that advocated for affordable housing for low and mid-low income families. Barack Obama acted as their attorney as this was a cause he also embraced.

O'Keefe And his cohort Hannah Giles, went 'undercover' at the organization. Apparently she posed as a prostitute, and introduced James as her boyfriend. They came away with five videos, released on five consecutive days, to painfully clip the dog's tail. With the help of Fox News and the controversial Andrew J. Breitbart (shown in centre of photo with O'Keefe and Giles), they made public unsubstantiated accusations against ACORN of tax evasion, human trafficking and sexual abuse.

As a result, the organization had their federal funding cancelled and were forced to close their doors, much to the detriment of vulnerable Americans. 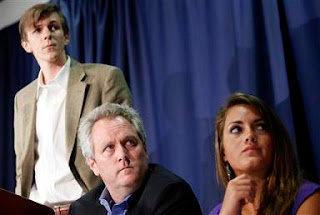 And what about those dog clipping videos?

On March 1, 2010, the district attorney for Brooklyn concluded that there was no criminal wrongdoing by the ACORN staff in the Brooklyn ACORN office. An investigation report by California Attorney General Edmund G. Brown Jr. released on April 1, 2010 found the videos from Los Angeles, San Diego, and San Bernardino to be "severely edited" and did not find evidence of criminal conduct on the part of ACORN employees, with the Attorney General stating "things are not always as partisan zealots portray them through highly selective editing of reality." The report also stated, ""Even if O'Keefe and Giles had truly intended to break the law, there is no evidence that any of the ACORN employees had the intent to aid and abet such criminal conduct or agreed to join in that illegal conduct." As of April 2, 2010, the other ACORN videos have not been released to the public in their full, unedited form, leading to speculation that the videos have been heavily edited to distort what happened during the tapings ***

Breitbart is also one of the 'Tea Party' gang, keeping company with the likes of people like Glen Beck and Rush Limbaugh.

Where are They Now?

Hannah Giles is actually a minister's daughter, who was in journalism school when she met O'Keefe on Facebook. From Fox: "Why go after ACORN?" Giles asked. "Because I love America, I love God, and corrupt institutions don't help that." And yet it turned out they weren't corrupt at all, and she merely made them look corrupt with what the attornery general called "severely edited" videos, because they believed in helping those less fortunate. Giles is being sued, but not to worry; all the heavyweights in the Religious Right are stacking up the greenbacks as we speak.

And as for O'Keefe, he moved onto bigger and better things.

You can read the FBI report here. I know you're thinking 'Watergate', and so am I. But then Morton Blackwell did once work for Richard Nixon.

*One of them is Tasha Kheiridden, co-author with Adam Daifallah of the book Rescuing Canada’s Right: Blueprint for a Conservative Revolution. Daifallah was one of the students involved with Mike Harris's attempt to take over student unions on Ontario campuses.

**From the Manning Centre's promo for their Campus Leadership Training Program.